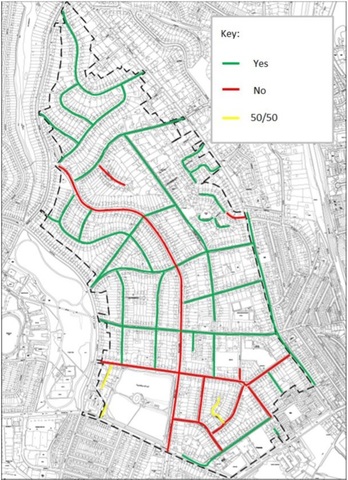 Residents opposed to a new parking zone were given an ultimatum – vote for the scheme or the council will remove the single yellow lines already in their roads.

A new residents’ parking zone is proposed for streets east of Hove Park where there are now single yellow lines with a one-hour parking restriction to prevent long-term stays.

But after people living in  Hove Park Road, Shirley Drive, Orpen Road, Shirley Road, Rigden Road and Lloyd Road voted no, they were told the single yellow line restrictions would be removed whether they voted for or against the zone.

A report going before Brighton and Hove City Council Environment, Transport and Sustainability Committee says the council would “not be in a position to continue with the single yellow line restriction alongside a resident parking scheme”.

The report said: “If residents do not wish to be part of the proposed parking scheme, the single yellow line restriction would be removed and the area will be unrestricted.

“If a parking scheme is approved and implemented in the neighbouring roads, it was outlined that there is a possibility of displacement of vehicles to their area due to the differing times of enforcement/hours of operation.”

Everyone living in the proposed zone was first consulted in June, where across the neighbourhood two thirds of those responding were in favour, and three quarters preferred a light touch scheme.

However, residents in the roads which had voted no were consulted again, with the ultimatum over the single yellows spelt out.

They were given until Friday 26 October to change their minds and they did, with 105 of 118 of those who responded voting for the new light touch zone.

In the report going before the committee on Tuesday 27 November, Hove Park Ward Councillors Jayne Bennet and Vanessa Brown, said they were happy to support the recommendations based on the resident’s wishes.

However, both were concerned about car parking shifting to areas outside the scheme and asked for extra parking restrictions such as double yellow lines to be considered outside the proposed zone.

In the consultation in June, 741 households responded, which works out as 56.7 per cent of people in the area.

The light touch would operate Monday to Friday 9-10am and 1-2 pm.

The area covered stretches from the Upper Drive to the east to the rear gardens of homes in Goldstone Crescent to the west and the rear boundaries of houses in Woodland Drive, Dyke Road and Old Shoreham Road.

Councillors are advised to approve the scheme when they meet in public at Hove Town Hall on Tuesday 27 November at 4pm.