Hope & Ruin taken by the ‘Scruff Of The Neck’ 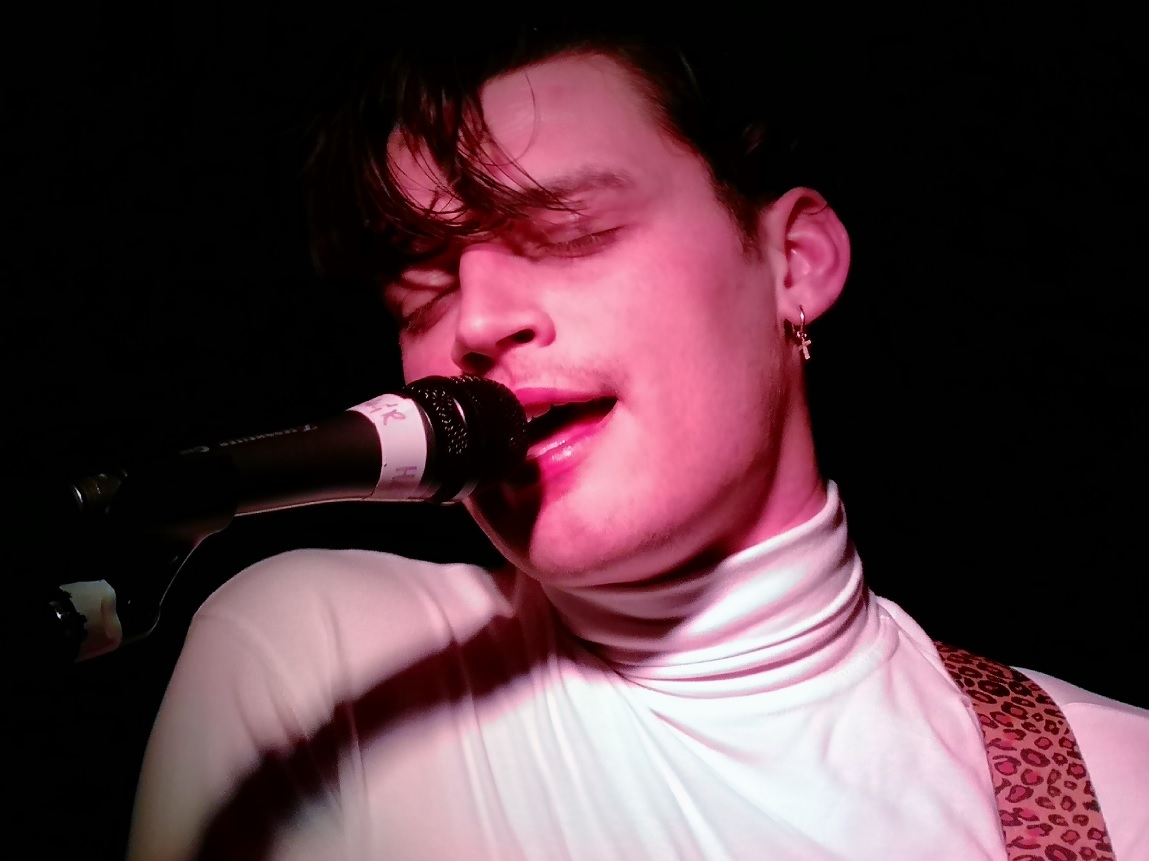 Tonight’s event up at the Hope & Ruin in Brighton was truly value for money. We had no less than four musical acts of contrasting styles for a mere £5. That’s only £1.25 per act, which is a bargain! There was something for everybody on offer courtesy of Harry and Louisa from ‘Scruff Of The Neck’ promotions company.

The acts participating this evening from 8pm to 11pm were Submariner, The Tin Pigeon, Drusila and Tommy.

The relatively packed crowd of mainly young student types were gathered on the first floor of the building where they were all having a good old natter. Then suddenly people at the front had realised that a lone chap had sneaked onto the stage and had started his set. 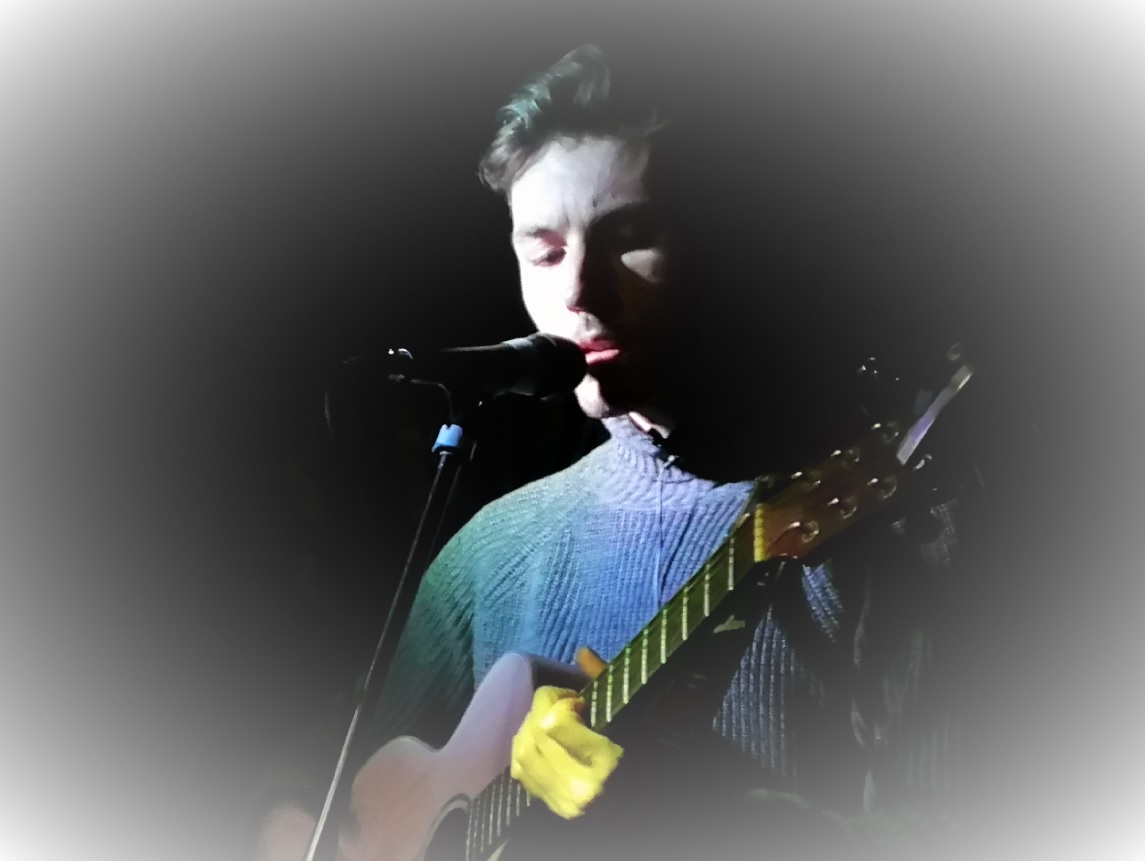 Tommy had arrived! After around fifteen to thirty seconds, I tell you what, you could have heard a pin drop! The decibel level had plummeted through the floor. Tommy from the south coast had secured his audience. I know exactly what a large majority of the people were thinking in the room…”OMG this guy is brilliant!”. 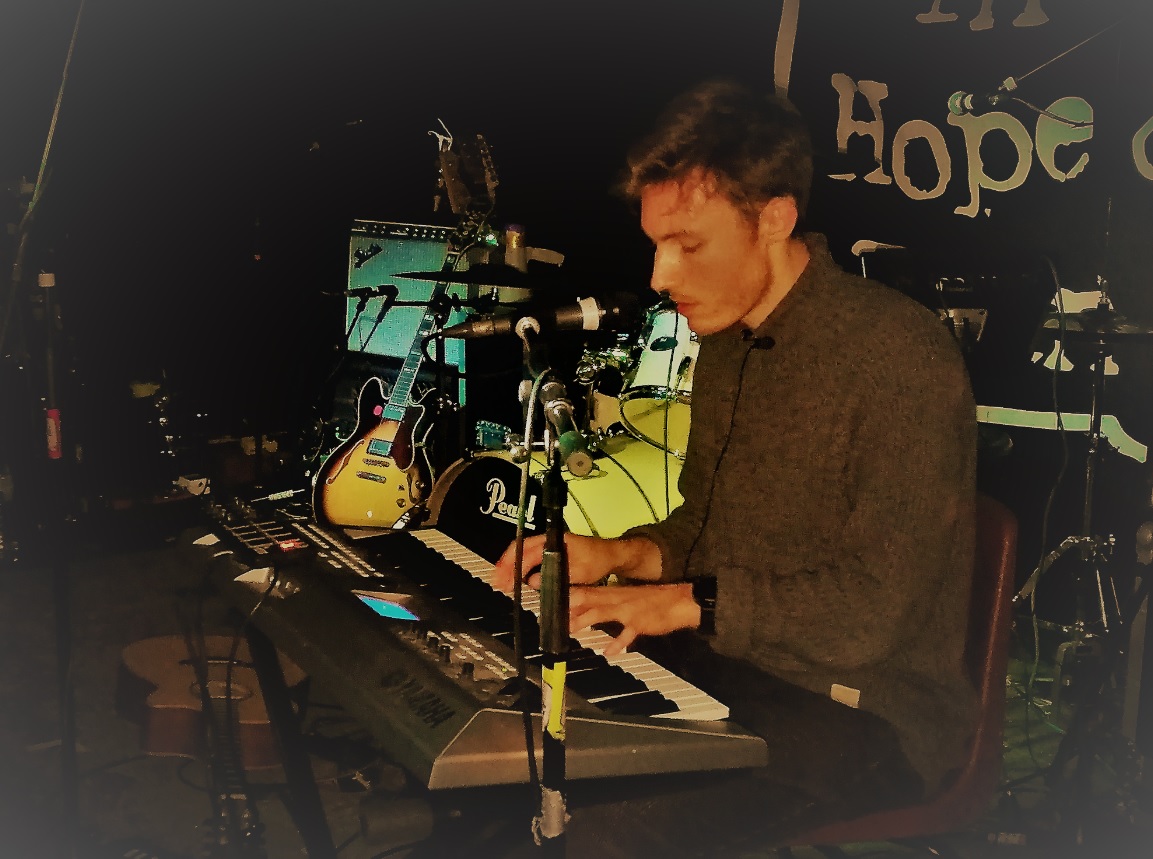 Tommy’s voice is easily comparable to the wonderful tones of Richard Hawley, Coldplay’s Chris Martin and Johnny Cash. Yes my friends Tommy IS that good. There he was standing there in front of us with his acoustic guitar and wearing an understated chunky jumper with no frills or gimmicks, he just let his voice do the talking. The audience were stunned/captivated as Tommy worked his way through his short set. He switched his guitar for a Yamaha keyboard and he was just as proficient at playing that too. He had successfully filled the room with his moody melancholia. 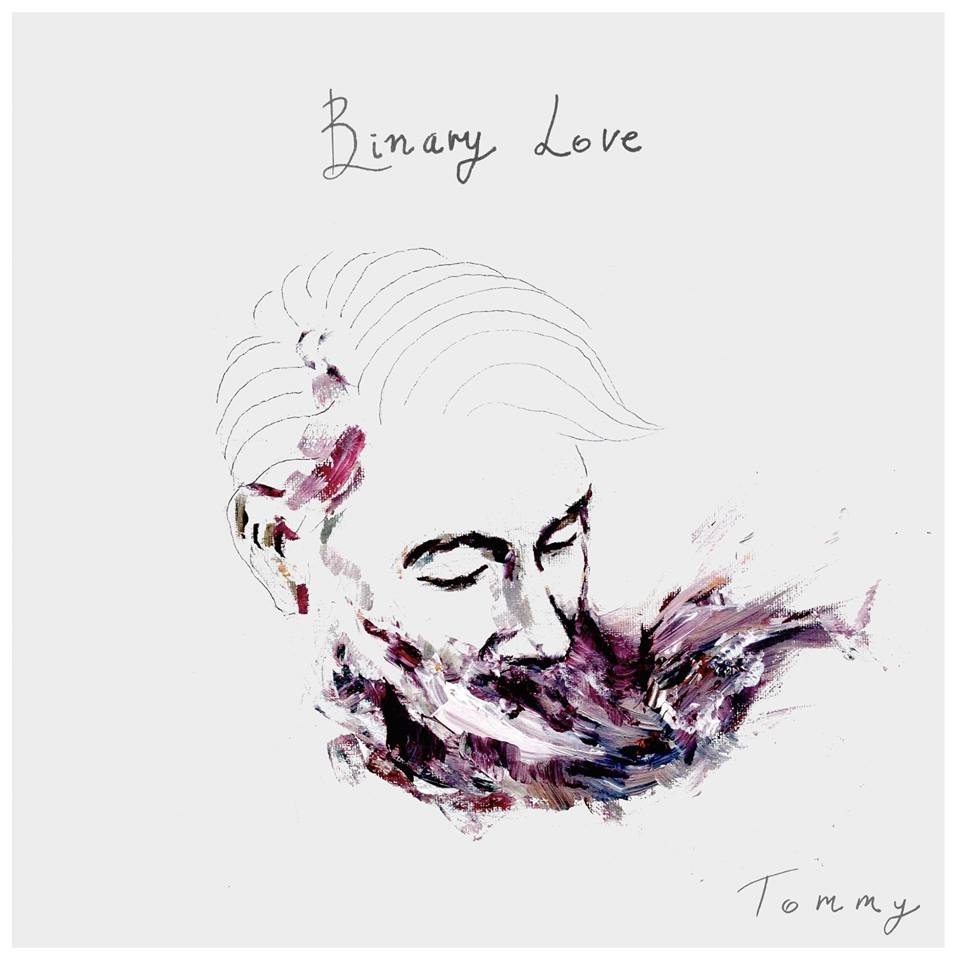 The lad needs to be discovered by a major label or top act to have him as support right now! After his five song set, I asked him “Do you know how good you are?”. He honestly seemed surprised with this as though no-one had told him before. Well if I am the first, then if success beckons, then I was the first of hundreds of thousands.

Next up were the act that I had been most looking forward to seeing on the account of the description that I had read suggesting that their work is reminiscent of the ‘Drive’ Soundtrack. 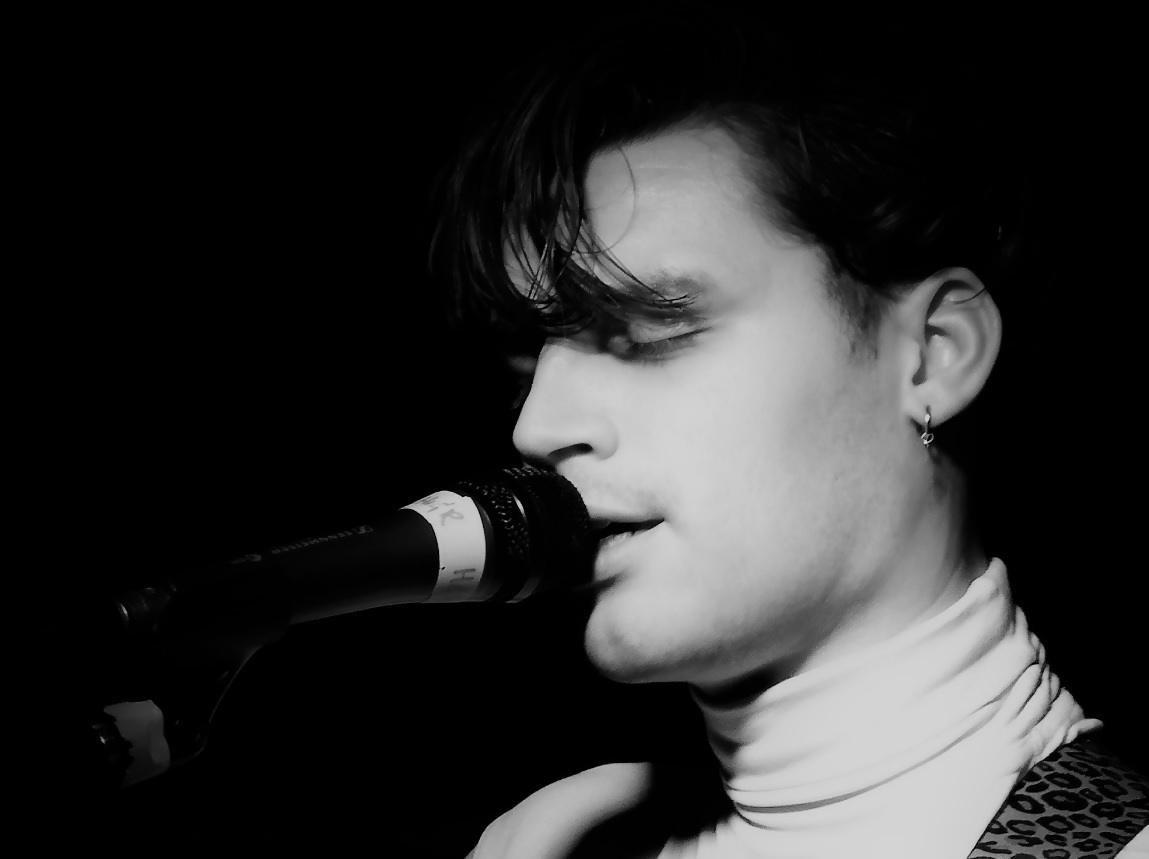 Enter Drusila – a couple lads from Portsmouth. As I entered the Hope & Ruin this evening, I passed some lads and I immediately knew that one of them just had to be in a band, you know some guys just have ‘the look’ and this chap had it in bucket loads. Yep I was correct, turned out to be Drusila’s singer George William Robert. 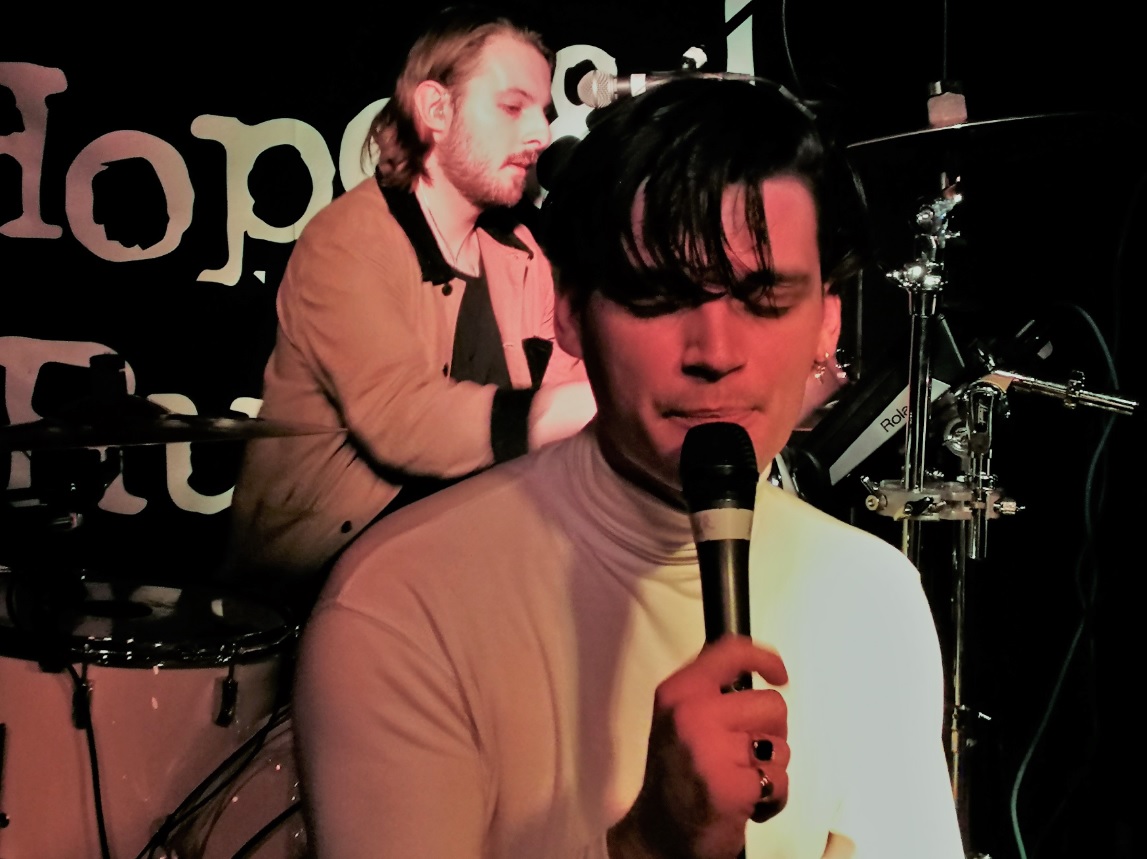 Drusila have true commercial possibilities with their unique blend of influences from electronica to indie rock with tons of 80s synth-wave thrown in, that you sure can dance around to. Having only formed at the beginning of this year, they have established themselves as one of the most impressive live acts to come out of the south coast. Their live performances are theatrically mesmerising as tonight singer George starts with a few decent heavy retro synth notes on the keyboard, then moves to the guitar and then across onto a second drum to accompany his pal Hugh Seckington (on drums) behind him. Then at one stage during the energetic performance, he was off into the audience with his guitar – exciting stuff and sounding really good too! 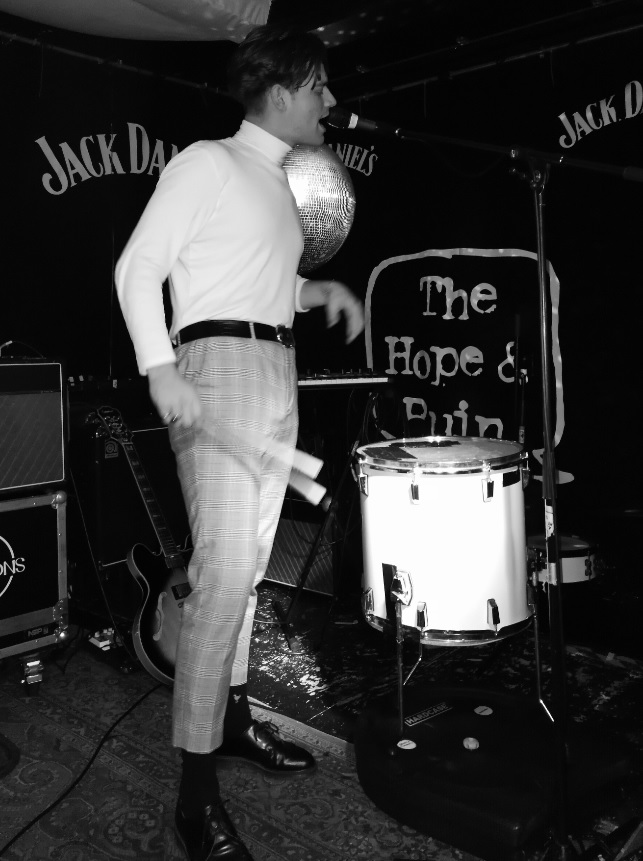 It seems as though their creative juices are flowing quite quickly at the moment, as they didn’t even play their recent and new singles, but went with newer unreleased tracks, with their penultimate really dancey titled ‘Think About Us’ being the pick of the bunch. I really need to see these guys perform live again really soon as they were right up my street.

The penultimate act tonight had ventured down from Leicestershire to be with us. They were Quentin Fraser and Thom Baguette aka The Tin Pigeons and they had brought a couple of chums along with them to make up a full quartet. 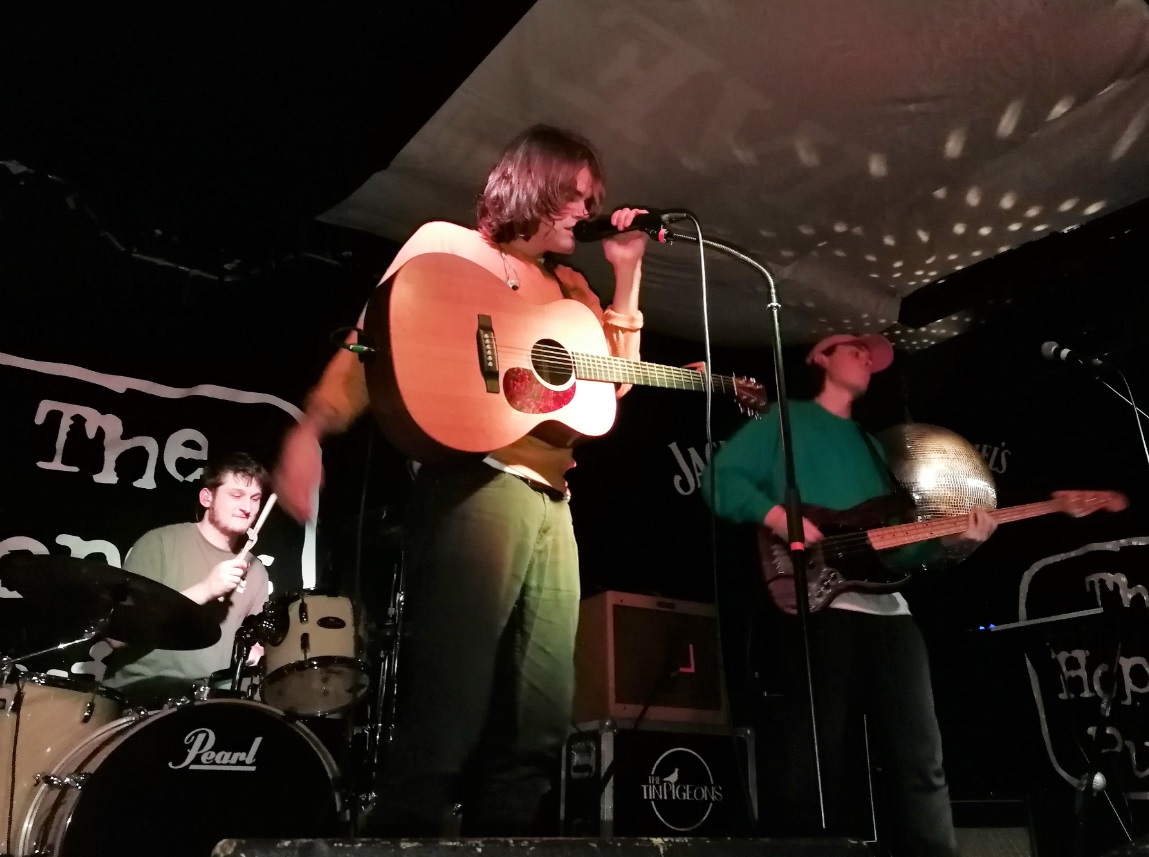 These lively bouncing fellows were having a great time with us tonight as they performed their uplifting indie music. Seems as though they are already on the radar as BBC Introducing referred to them as “One of the best festival bands we know” after they conquered the major festival stages in the country including Reading & Leeds and in fact the lead single from their debut EP ‘Sparks‘ received national recognition when it was named as BBC Radio One’s Introducing track of the week – gaining huge support from the likes of Huw Stephens,Greg James and Steve Lamacq. 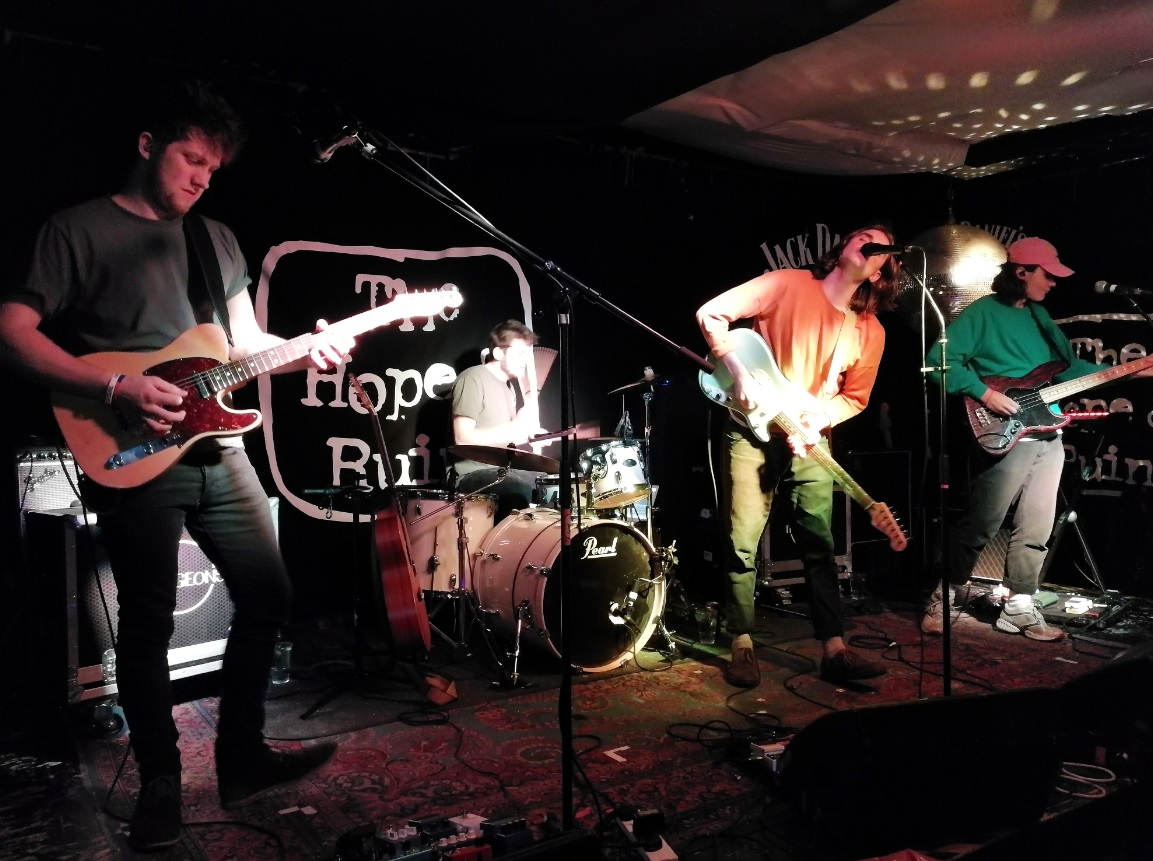 Their single ‘Home‘ has been played on BBC6 and their most recent single ‘Always the Same‘ has been praised by top blogs.

After their set tonight, my colleague felt that they were a heavier version of The Housemartins. I conveyed this to a member of the band and he replied “Oh yes, we’ll take that!”. 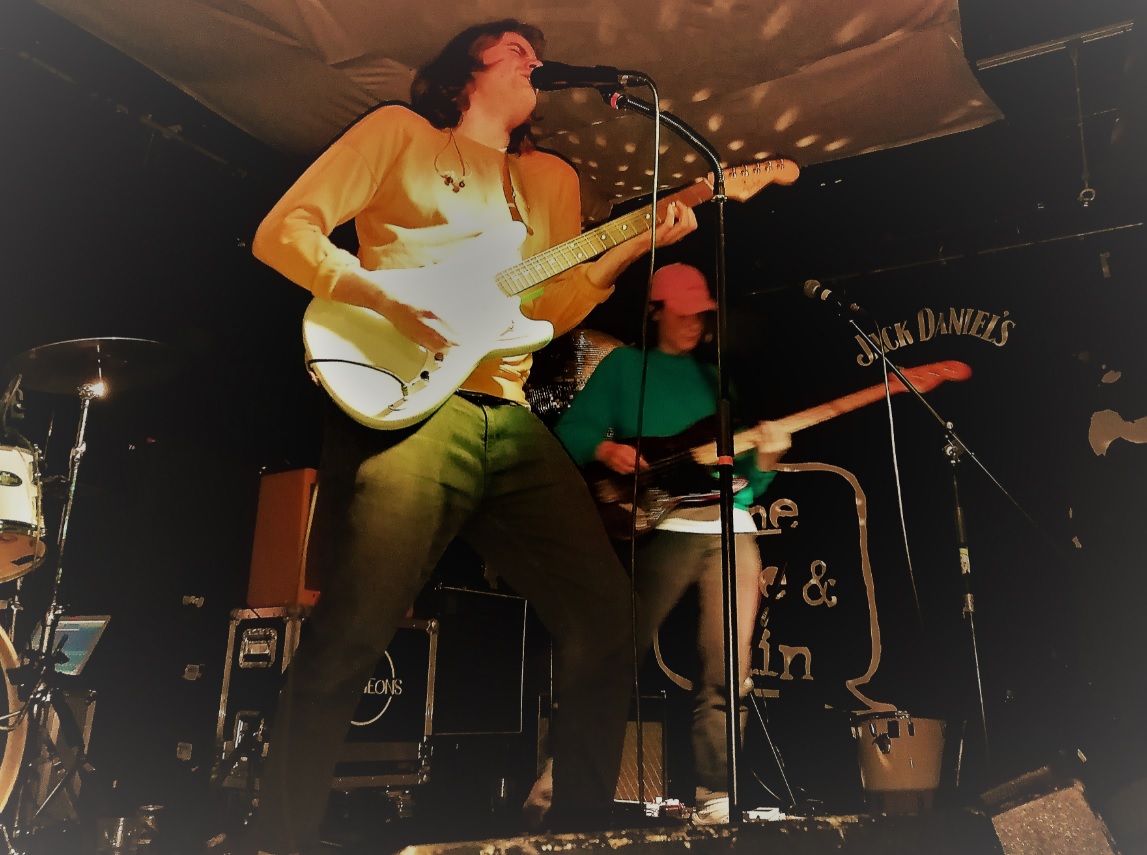 Find out about The Tin Pigeons below:
FACEBOOK
LISTEN

It was now time for this evenings headliners Submariner to greet the stage. Football rivalries set aside with these guys as half the outfit are based in Brighton and the other guys are along the coast in Pompey. 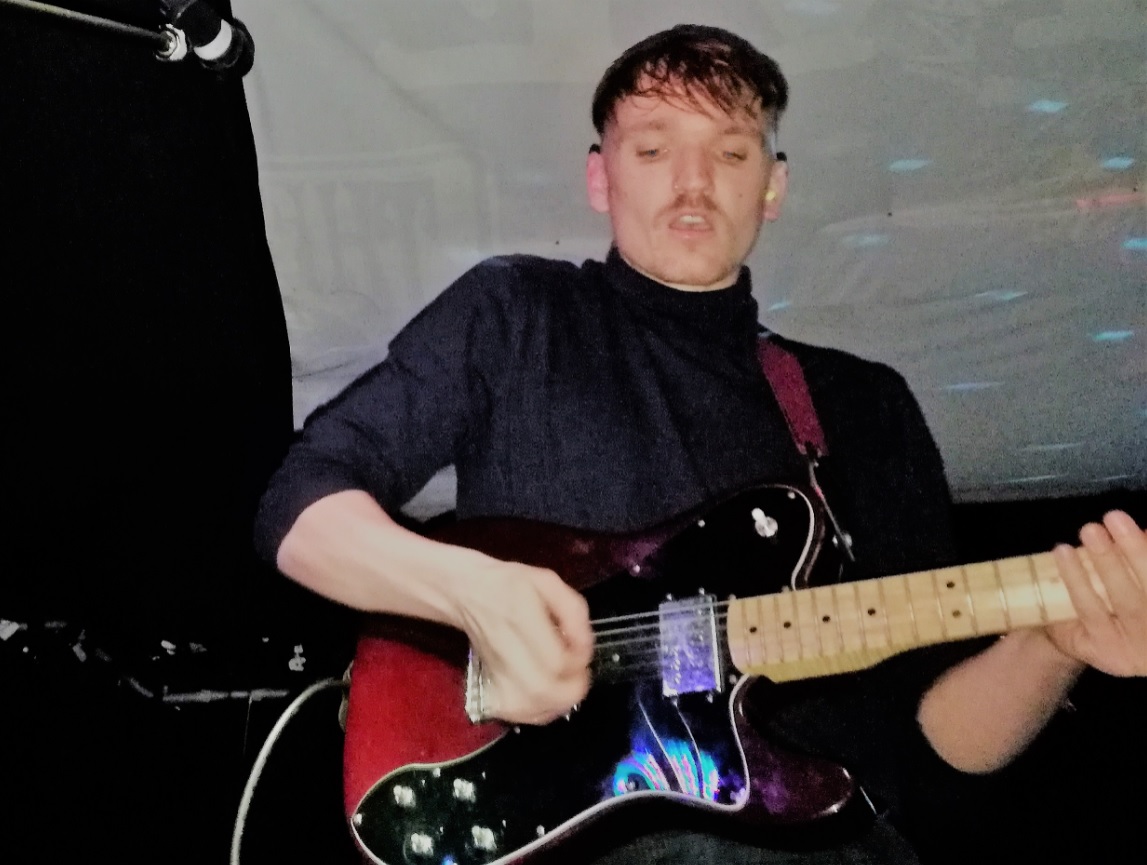 It has been said that Submariner hem together ambient indie rock, emotive lyricism and an organic flair for earworm melodies. Whereas my colleague this evening likened them to Big Country, an accurate analogy I would suggest. 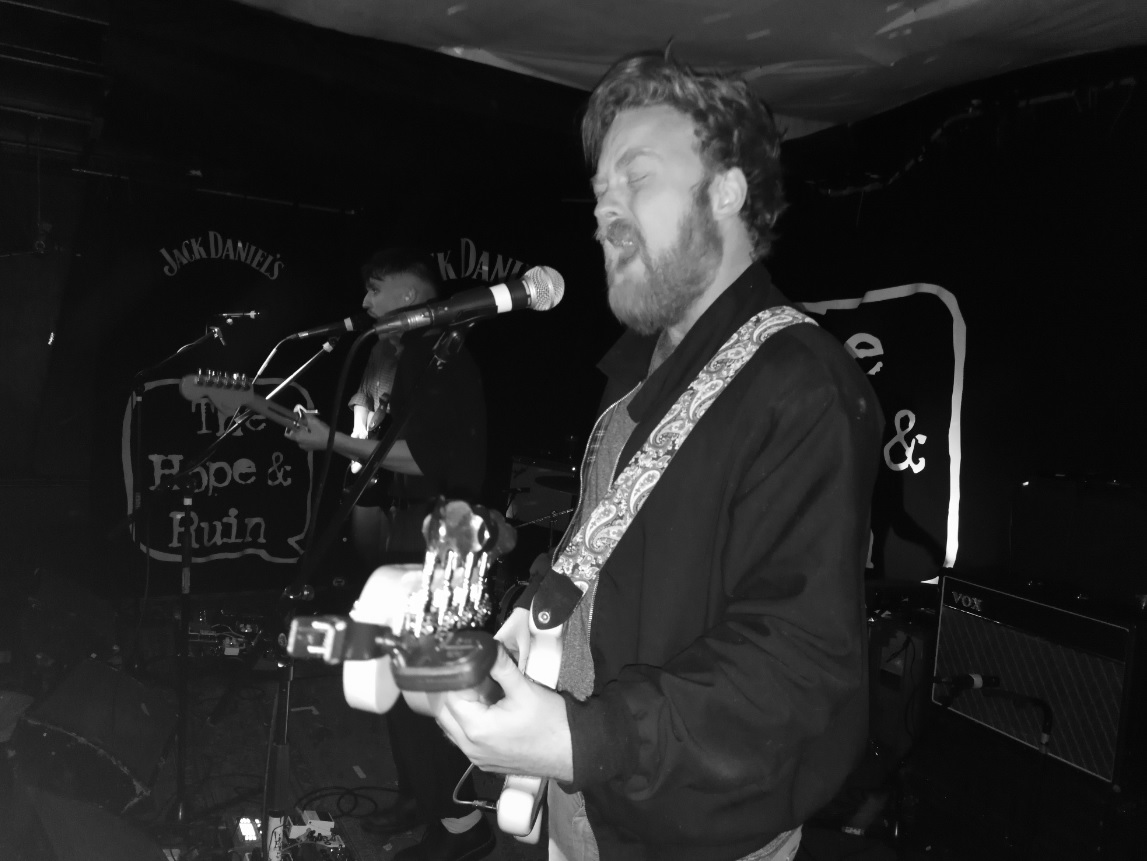 After a strong 2017 where they performed copious headline slots on the South Coast, made their major festival debuts at Common People and Victorious festivals, released their debut music video for ‘Closer’ and gained attention from BBC introducing and The Line of Best Fit; Submariner are primed and ready to mark the end of one chapter as they have just uploaded their new video for ‘T.O.Y.S’ – watch it HERE.

The lads finished their set with the aforementioned ‘T.O.Y.S’ and had included a brand new song that I believe was getting its very first outing this evening. It was titled ‘Glazed’. However, my pick of the bunch would be ‘THRU’ which the band have been experimenting with a heavier sound. 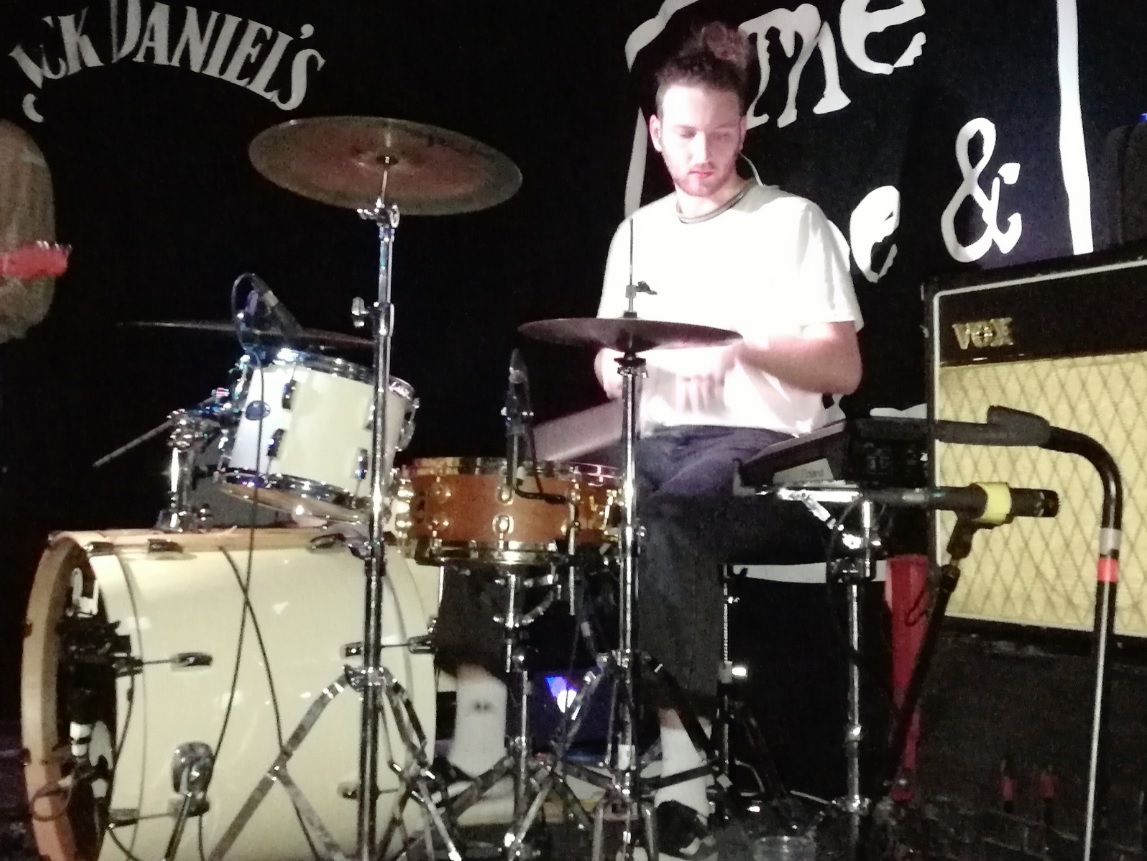 Submariner were having a ball tonight and their enthusiasm flowed off the stage and out into the audience. 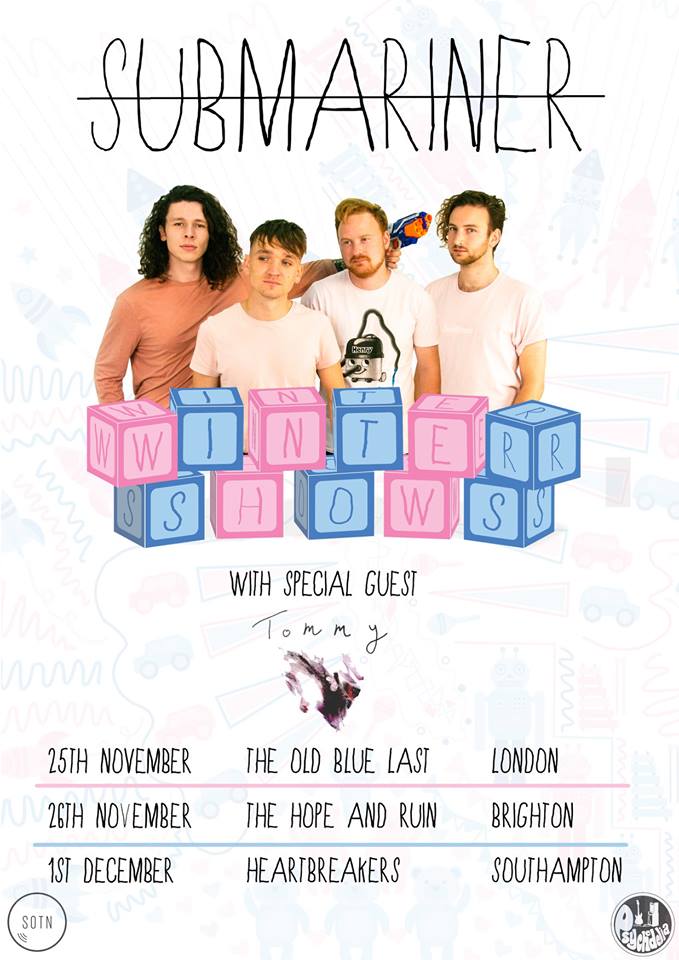 Can’t Decide What To See? See Everything!