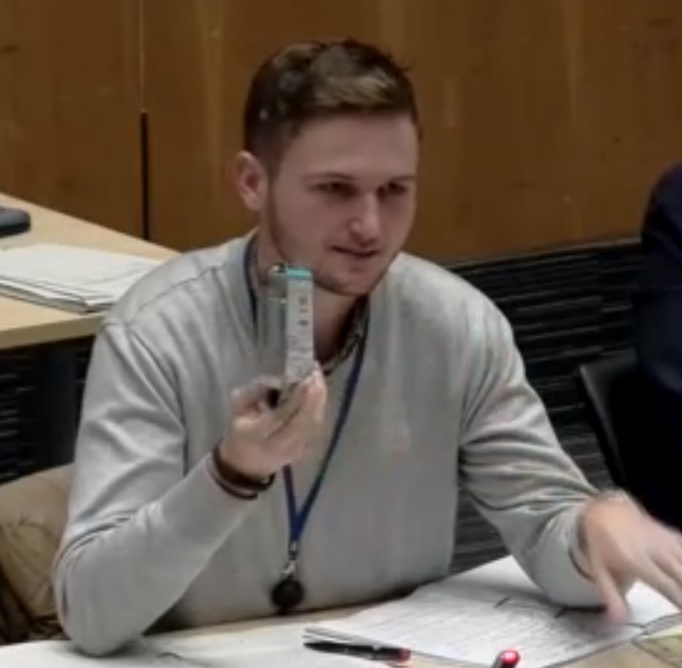 Joe Miller with his sushi box

A councillor held up his supermarket sushi box to highlight how the council doesn’t recycle all plastic packaging last night.

Conservative councillor Joe Miller was quizzing officers on why Brighton and Hove City Council only recycles certain plastics and not items such as the sushi box or the hummus pot he also brought along.

He said the pots both claimed they were made of plastic which is widely recycled – but neither are recycled by the council.

Councillor Miller told last night’s environment, transport and sustainability committee: “These say on here – this is for my dinner, sushi from Co-Op – widely recycled lid and tray, and likewise the hummus pot.

“I don’t know whether that’s accurate or not or whether it’s just in our area they aren’t recycled because of the contract with Veolia, or whether there’s a national thing that there’s not a market. ”

In response, assistant director of city environment Rachel Chasseaud cited a report titled Everyday Plastics, which argues the emphasis was wrong on plastics, which while they can be recycled in theory, in reality they are not as the bottom has dropped out of the market.

She urged people not to put trays pots and tubs in their recycling as there is a threshold for contamination and the authority is trying to reduce this to help improve its recycling rate.

However, she also announced that overall, recycling is on the increase. During the first quarter of the financial year recycling rates have increased to 30.4 per cent of household waste, its highest levels, councillors were told.

This is up from 29 per cent last year, which was an increase from the year before, but still lower than the national average of 44 per cent.

She told the committee work is underway on an increasing recycling project and education campaign to launch early next year.

This will include a multi-media campaign telling people what they can recycle in the city, and how and where.

As there is no market for recycling pots, tubs and trays, the report states it is unlikely the council will extend its plastic recycling.

Mrs Chasseaud said the National Audit Office is looking into where plastics go when they are recycled.

She said the non-recyclable plastics are burnt at the incinerator in Newhaven, powering 22,000 homes.

Labour Councillor Peter Atkinson said: “We have to accept the reality of recycling plastic tubs and trays as there is no market for them.

“Hopefully we can join together with other councils through the Local Government Association and bring about a change in packaging at source from supermarkets and businesses.”

Green Councillor Leo Littman put forward an amendment asking for officers to look into increasing the amount of plastics and report back to the January committee.

This was agreed unanimously by councillors and a report into plastic recycling will now go before the committee when it meets on Tuesday, 22 January.

Work is also underway to reduce the amount of single use plastic in the city.

The Brighton Marathon has submitted a plan to eliminate single use plastics from the event in April next year.

Meanwhile, the council is also looking at a food waste collection service.

In July 2015 as part of the Cityclean report food waste collection was explored in detail but not pursued as it would cost more than £1 million per year.

The council encourages people to compost garden waste at home.

However, Labour Councillor Alan Robins said after an increased number of rats at his allotment he was told by officers composting was not advised there as it contributed to the problem.

Since 2007, more than 20,000 compost bins have been sold through the council’s subsidised scheme.

The council also funds 37 community composting schemes in the city in partnership with Brighton and Hove Food Partnership.