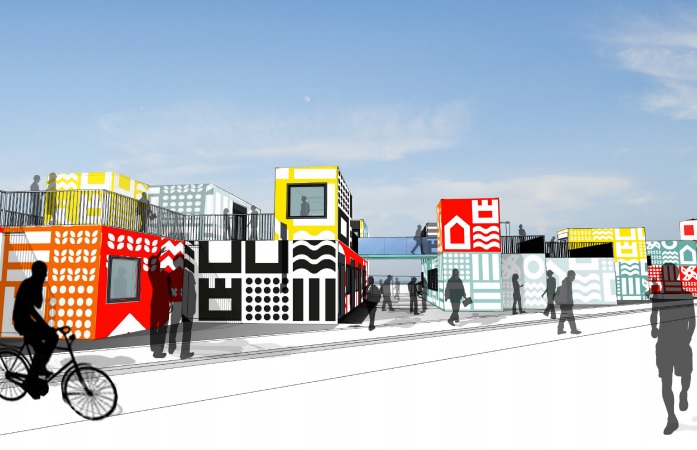 A wave of support for a seafront swimming pool goes before Brighton and Hove planners next week.

First mooted as a 50 metre pool in 2015, the current application for Sea Lanes in Madeira Drive is for a 25 metre pool on a temporary basis for five years.

When the plans were first submitted in June, Sea Lanes said it hoped to open as soon as next spring.

The application includes an events space and moveable, brightly coloured, one to three storey buildings to provide office space, food, drink and shopping.

Members of the Planning Committee are advised to approve the scheme when they meet on Wednesday 5 December, on the condition it is all removed once the five years are up.

A long-term future for this particular pool complex design is off the table as the design causes “harm to the special historic character” of the area.

The authority received 35 letters supporting the project and six objections.

Comments left on the council’s planning portal include: “As a local resident I feel that area needs an uplift and there are not enough swimming pools in Brighton and none at the Kemp Town end.”

But many, while supporting the scheme, are not fans of the associated buildings.

One comment said: “I fully support investment in this area of the city and the concept of the open air pool is great, but the design of the container led development is completely out of context with the sea front and should be refused in its current design.

“Although it is acknowledged that this is a temporary structure that is no excuse for the poor garish design proposed.”

In its comment the Kingscliffe Society said: “Overall volume of development is excessive for a modest site in setting of heritage assets; and colours don’t complement sensitive setting.”

The report going before the committee said by 1 April 2025, the shingle “shall be replaced on the beach where the pool was and flattened to match the surrounding beach”.

Concerns were raised earlier this year when Southern Water told planners it would not allow any development within six metres of its combined critical sewer running under the seafront where the modular buildings are to be sited.

However, further investigations showed the sewer is deep enough not to be affected by the temporary scheme.

The company said an engineering solution could be found to protect the sewer if permanent buildings were proposed the in future.

Southern Water is waiting for a formal application for a connection to the public foul sewer and public water main.

The application is before the Planning Committee when it meets in public at Hove Town Hall on Wednesday 5 December from 2pm.