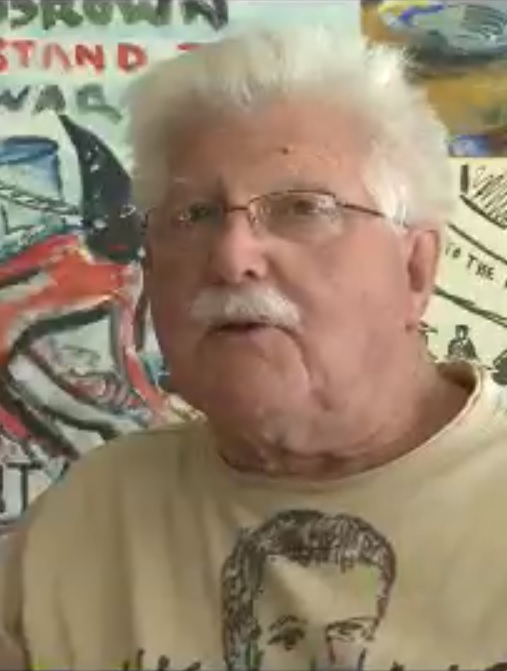 John Catt. Still taken from a video interview given to The Guardian

A 94-year-old Brighton protester has won an eight-year battle to get his details wiped from a police extremist database.

John Catt, of Shepherds Croft, Withdean, has been peacefully demonstrating since 1948, but was first placed on the National Domestic Extremism Database after taking part in Smash EDO demonstrations in Brighton in 2005.

The Smash EDO demos, against the EDO factory in Moulsecoomb which allegedly manufactured widgets used by Israeli bombers, often turned to violence, with one march through central Brighton ending with smashed windows and missiles being thrown. However, Mr Catt was never even accused of being involved with this.

He discovered these and other entries, 66 in total, after making a subject access request to the police under the Data Protection Act in March 2010.

In August that year, he asked the police to delete these entries, but his request was denied with no explanation.

He started a judicial review, and while that was ongoing the police cleaned up the extremist database and he was told his entries were reduced to two – although it was later revealed that six were kept.

The judicial hearing in 2012 found that the police were justified in keeping the database, but Mr Catt was given leave to appeal.

The Court of Appeal found in Mr Catt’s favour in 2014, saying the inclusion of his details in the database breached his rights to privacy under the European Convention on Human Rights.

But the police appealed to the Supreme Court, which found in their favour in 2015.

A further subject access request made by Mr Catt was refused later that year, with police saying the database needed to be kept confidential.

However, Mr Catt did not give up and took his case to the European Court of Human Rights, which today found in his favour.

The judges said: “The applicant, who had never been charged with any crime, nor accused of any violence, nor suspected of being directly involved in criminal activities undertaken by the group Smash EDO, and who had been assessed as not being a threat ended up having personal data relating to his participation in demonstrations and trade union events, and thus to his peaceful exercise of the rights protected under Articles 10-11 of the Convention, kept on police records in a searchable database for an indefinite period.

“Even the existence of the database in question was not clearly acknowledged until the domestic proceedings in this case.

“A subsequent review of matters relating to undercover police operations, prompted by allegations made by whistleblowers, also led to a review of the database on overtly obtained intelligence, resulting in the deletion of part of the data originally retained concerning the applicant.

“As pointed out by the applicant in his submissions, a system that must rely on whistleblowers, litigation and press disclosure to ensure proper conduct is not adequate in terms of protections against abuse or arbitrariness.”

“This judgement is a timely reminder of the importance of the European Convention on Human Rights in protecting privacy and the right to protest in the UK and across Europe.

“This ruling sets an important precedent that it is unlawful for governments across Europe to label citizens engaged in peaceful protest domestic extremists and put them on a database for a potentially indefinite period.”