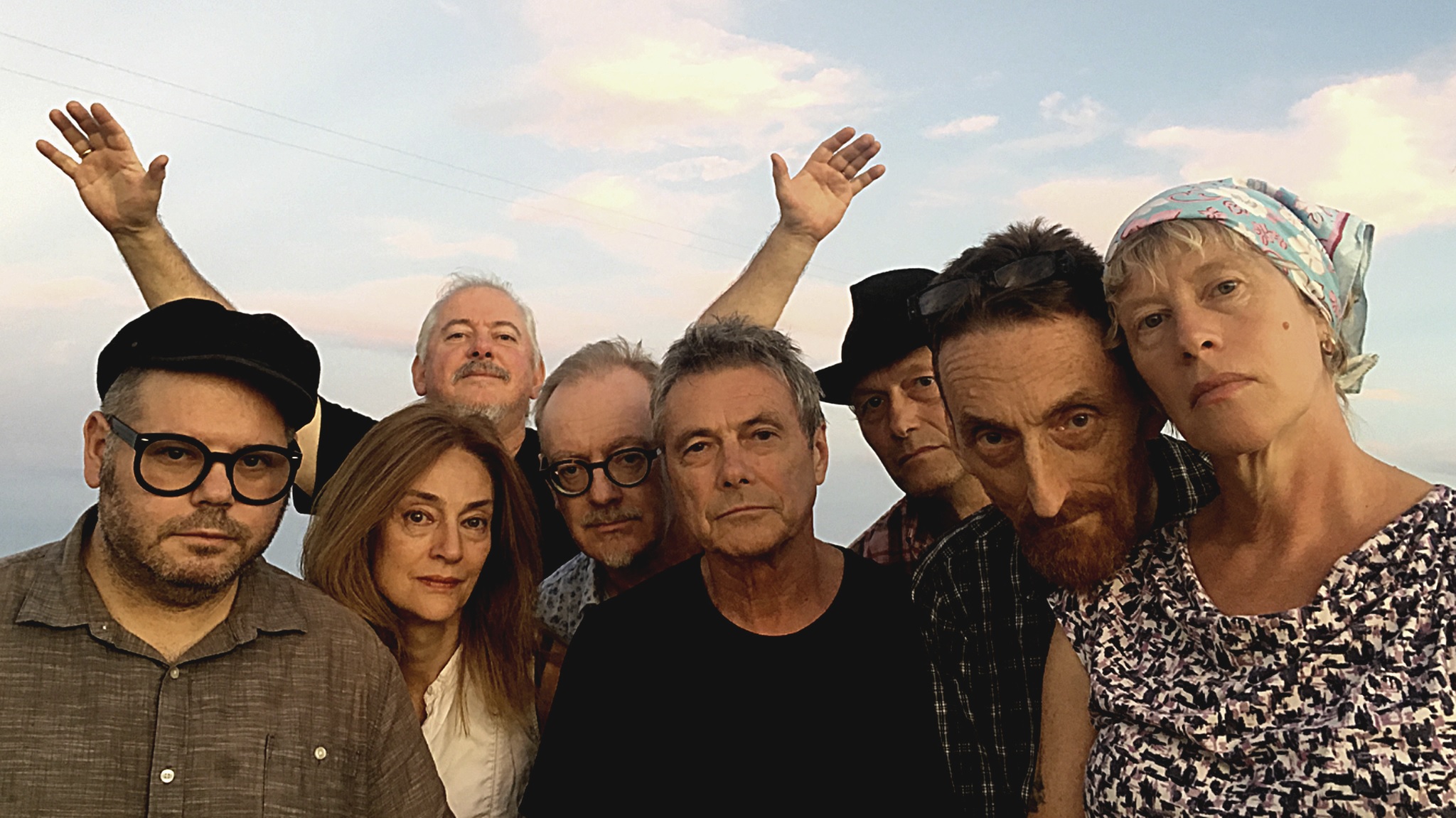 The Mekons have announced a new album entitled ‘Deserted’, which will be released on 29th March on Glitterbeat Records and four UK gig dates including an appearance at Patterns in Brighton on Thursday 4th April. Other dates are Le Pub in Newport on Tuesday 2nd April, Brudene ll Social Club in Leeds on Wednesday 3rd April and The 100 Club in London on Friday 5th April. Grab your Brighton date tickets HERE.

“There’s never been a band quite like the Mekons. Unmarred by breakups or breakouts, undefined by genre, geography, or ego-trips … no rock outfit’s ever been this committed to behaving like a true band, with all the equanimity and familial bonding implied.” Rolling Stone.

This legendary group from Leeds, have written contemporary music history for the last 40 years as radical innovators of both first generation punk and insurgent roots music. Their new album was recorded in the desert environs of Joshua Tree, California, and is drenched with widescreen, barbed-wire atmosphere and hard-earned (but ever amused) defiance.The return of one of the planet’s most essential rock & roll bands. 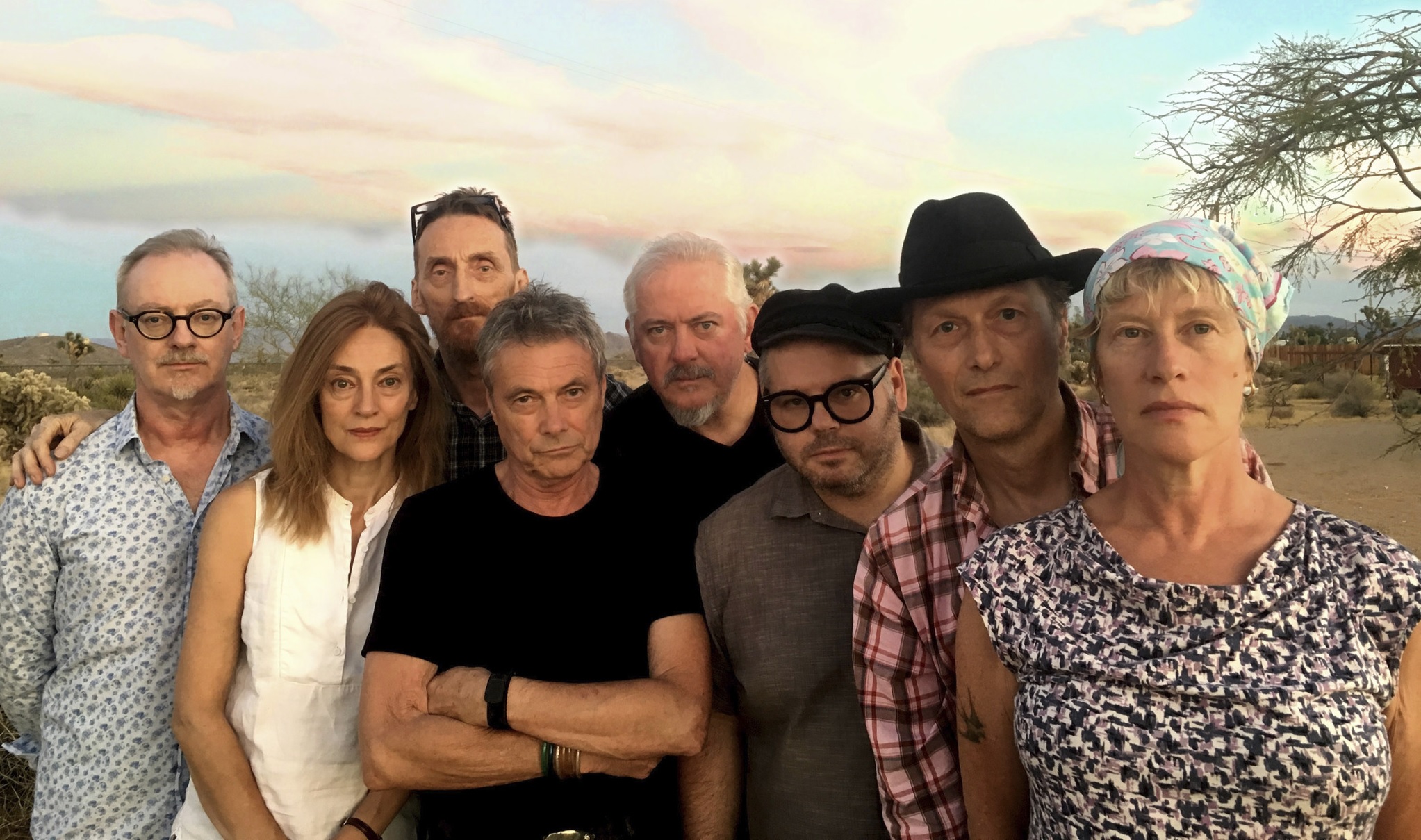 When punk exploded in London, fast and brash and full of fury, up in Leeds the Mekons came blinking into the light at a much slower pace. Singles like ‘Where Were You’ and ‘Never Been in a Riot’ (both from 1978) fractured punk’s outlaw myth with the ordinariness of real life. During the next decade, as country singers donned cowboy hats and slid into the stadiums, the Mekons celebrated the music’s rough, raw beginnings and tender hearts with the ‘Fear and Whiskey’ album (1985) and went on to demolish rock narratives with ‘Mekons Rock’n’Roll’ (1989). For more than four decades they’ve been a constant contradiction, an ongoing art project of observation, anger and compassion, all neatly summed up in the movie ‘Revenge of the Mekons’, which has ironically brought an upsurge in their popularity around the US as new audiences discover their shambling splendour. And now the caravan continues with ‘Deserted’, their first full studio album in eight years. 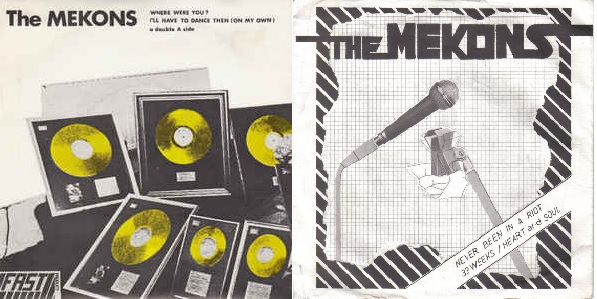 And desert is an apt word. This time there’s an emphasis on texture and sounds, a sense of space that brings a new, widescreen feel to their music, opening up songs that surge like clarion calls, like the album’s opening track, ‘Lawrence of California’.

“We were recording at the studio of our bass player, Dave Trumfio,” founding member and guitarist/vocalist Jon Langford recalls, “It’s just outside Joshua Tree National Park. Seeing Tom [Greenhalgh, the group’s other original member] wandering in that landscape looked like a scene from Lawrence of California.’ And then, ‘Wait a minute, there’s a song in that.’” 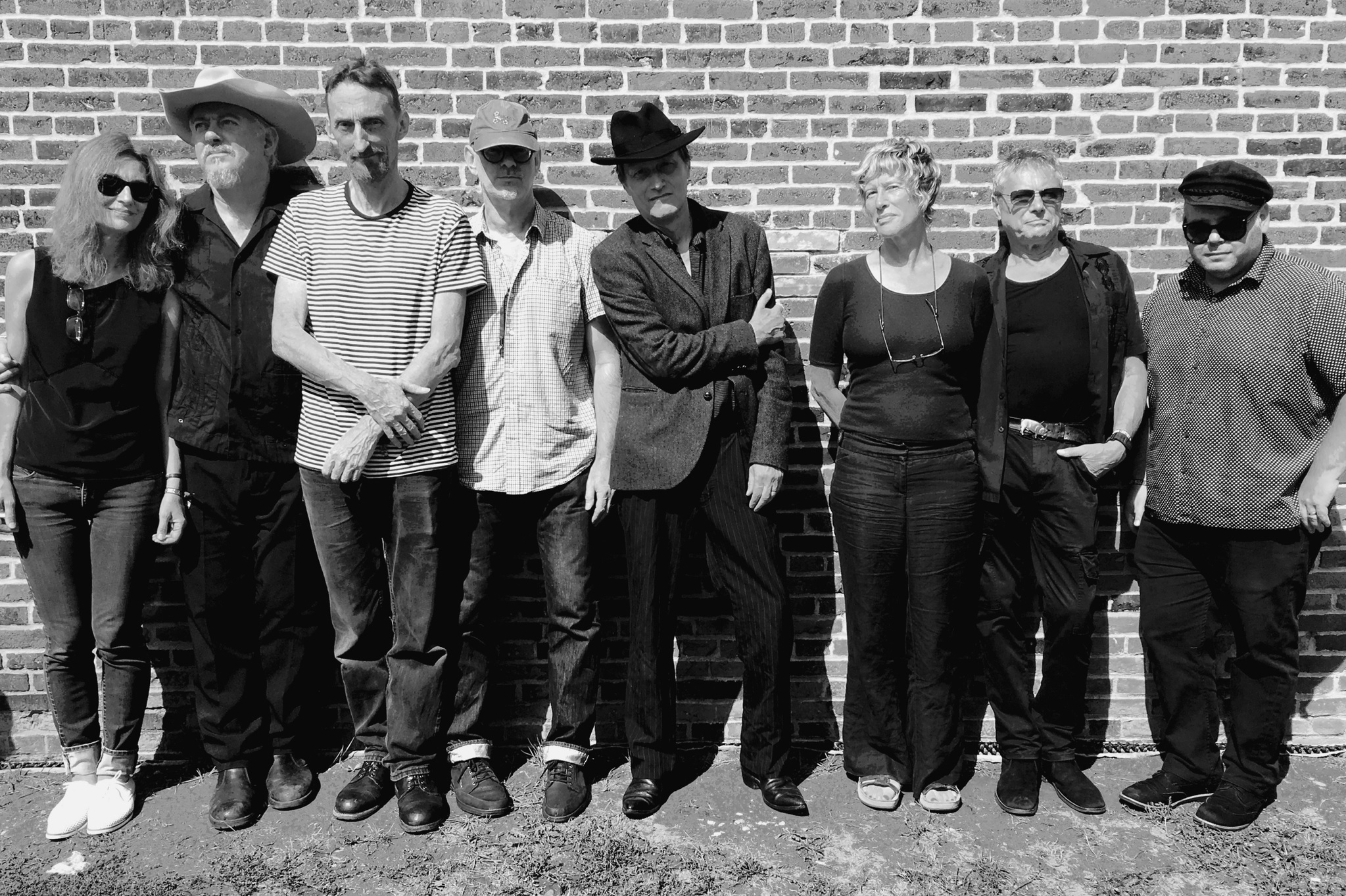 The band arrived with no songs written, only a few ideas exchanged by email between Langford and Greenhalgh. “Things emerged. At one point we had a sheet with a few words written here and there. Everyone added bits and by the time it was finished, it only needed a few changes to be able to sing. Somewhere else there are two lyrics sung over each other.”

Five days of brilliant chaos let their thoughts run free, from the almost-folk wonder of ‘How Many Stars’ and the wide open space of ‘In The Desert’, to the oblique strangeness of ‘Harar 1883’, a song about French poet Arthur Rimbaud’s time in Ethiopia, inspired by photographs Greenhalgh has of the period. And then there’s ‘Weimar Vending Machine’.

“That starts off about Iggy Pop in Berlin,” Langford explains. “There’s a story that he went to a vending machine and saw the word ‘sand’. He put his money in and a bag of sand came out.”

It’s a gloriously unlikely, cinematic image to use as a springboard into the album’s longest song, a piece that shifts between darkness and joy, powered by Rico Bell’s piano and Sally Timms’s clarion voice. It’s one to provoke thought and questions, but that’s hardly unusual for the band. They’ve always revelled in the surreal and the bizarre. What stands out on ‘Deserted’, though, is the space and clarity in the sound,
with Susie Honeyman’s violin taking a more prominent role on a couple of the tracks.
“Susie’s wonderful,” Langford says. “You play something to her, she thinks for a minute then comes out with this haunting Highland beauty.” 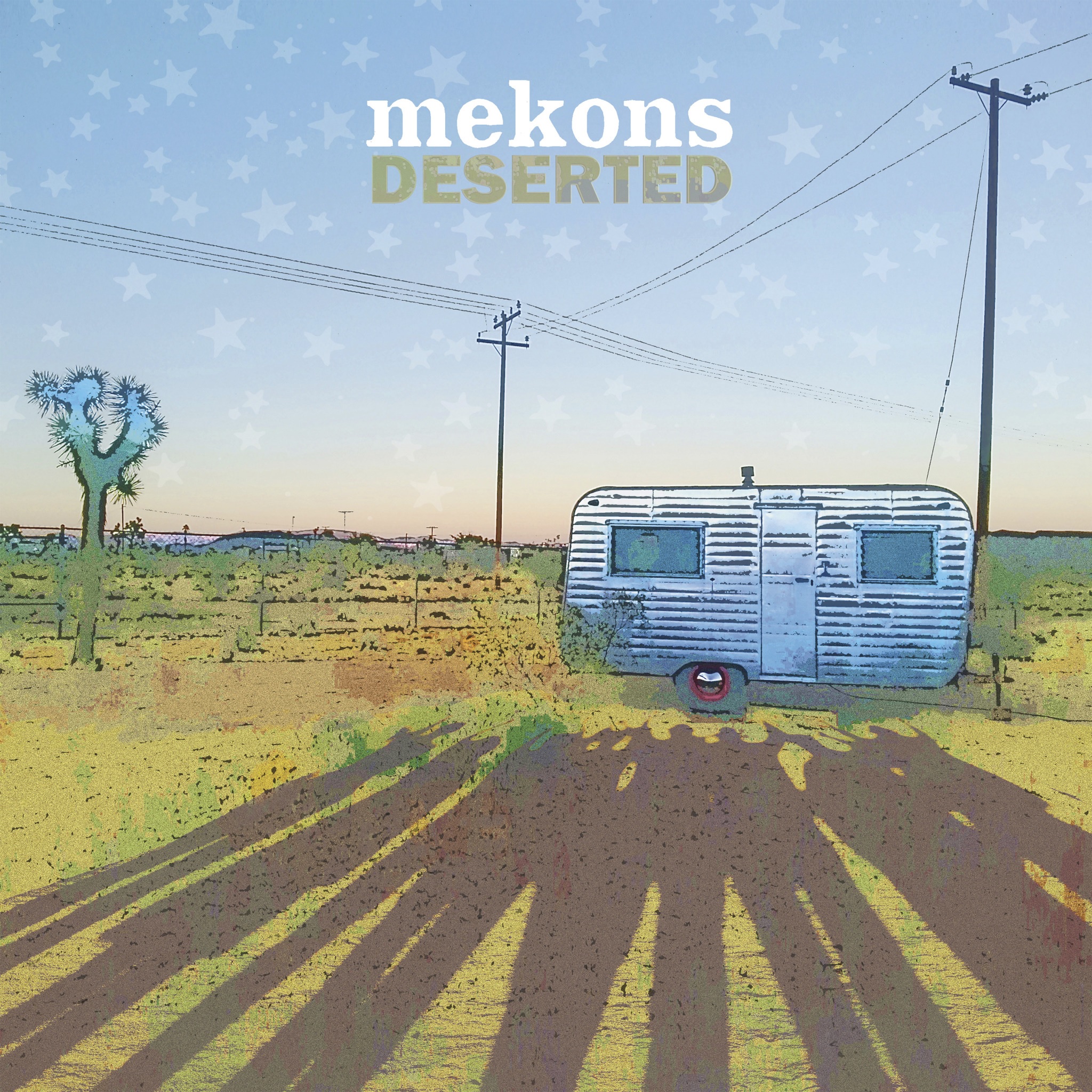 ‘Deserted’ the new album from The Mekons

Even the impromptu instrumental sessions find their way into the record, sometimes transformed and spacey to add texture to a song, elsewhere simply allowed to float free and form the tail to ‘After The Rain’, the album’s closer. The studio itself becomes an instrument here, and much of that is down to Trumfio, whose production credits at his Kingsize Soundlabs include Wilco and the Pretty Things.

“Even during the mixing, Dave pushed us into some new sonic territory all the way through,” Langford Recalls.

The tweaking and effects take them about as far as they can go from 2016’s ‘Existentialism’, which saw all eight members crowded around a single microphone in a tiny theatre in Red Hook, New York, recording live in front of an audience. ‘Deserted’ offers a different kind of freedom. Of space and stars and wide-open land. Of possibilities and past. But mainly of the future.

It’s fresh territory. But that’s always been what attracts the Mekons. They show that four decades doesn’t translate to becoming a heritage act. Instead, they keep experimenting, from the jagged, spaced throb that powers ‘Into The Sun’, revolving around the drums of Steve Goulding and Trumfio’s bass to the barely controlled anarchy that’s ‘Mirage’, or a countrified homage to ‘Andromeda’. Everything is possible, everything is permitted. 41 years after that first single they’re still moving. Still defiant, still laughing, still joyful. Never underestimate some happy anarchy, and never write off the Mekons.

Deserted, perhaps, but they’re back to tip the world on its axis. Again.

Let’s meet the Mekons (from left to right): 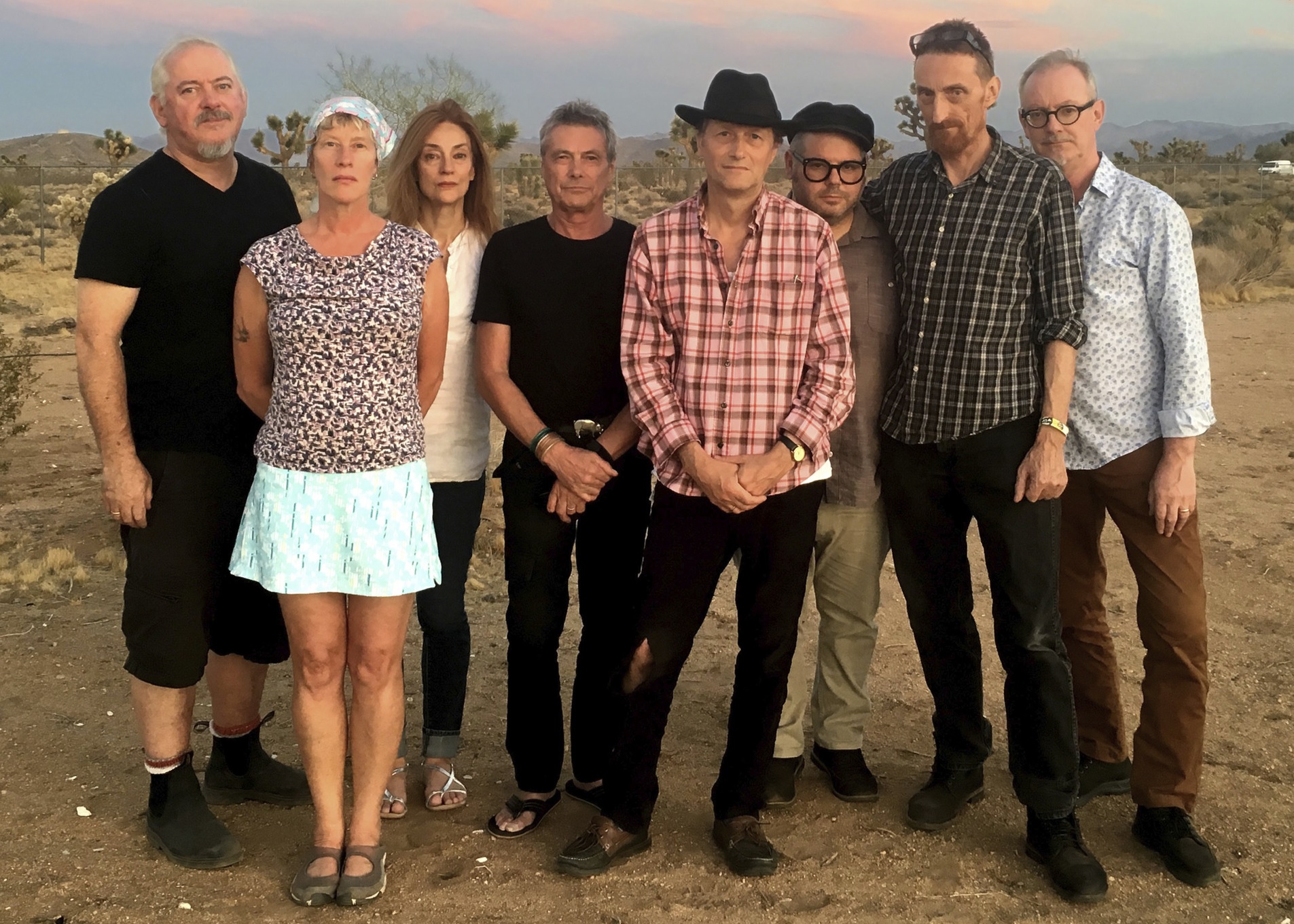 Susie Honeyman a.k.a. Florence of Arabia (Bethnal Green, Scotland): joined Mekons
in 1983 as a violinist. Susie’s other projects include Echo City, Little Sparta, Fire Engines, The Higsons, Rip Rig and Panic, Vivian Stanshall and an art gallery in London called the Grey Gallery.

Rico Bell a.k.a Yucca Bell (Aptos CA, Wales/Liverpool): accordionist and singer since
1985, an acclaimed oil painter who has made a series of solo albums with his band the Snake Handlers and worked with Martin Barre of Jethro Tull & the March Violets.

Tom Greenhalgh a.k.a Tom E Kalaharihalgh (Devon, England): Founder member vocalist and guitarist since the Mekons formed in Leeds 1977, Tom is a multimedia artist and has also been a member of Edward II and the Red Hot Polkas and King Tommy’s Velvet Runway.

Dave Trumfio a.k.a. The Baron Waste (Chicago/LA USA): Began working with Mekons
as a sound engineer in 1994 and has played guitar, keyboards & most recently bass in the band. Other projects include Pulsars & a new Dark Wave combo Viktor Fiction.

Lu Edmonds a.k.a. Tak Lu Makan (Citizen of the World): a Mekon since 1985 first as a
bassist but now on stringed instruments including the saz, cumbus and oud. Formerly a
member of the Damned, 3 Mustaphas 3, Billy Bragg and the Blokes currently a member of PIL and Les Triaboliques. 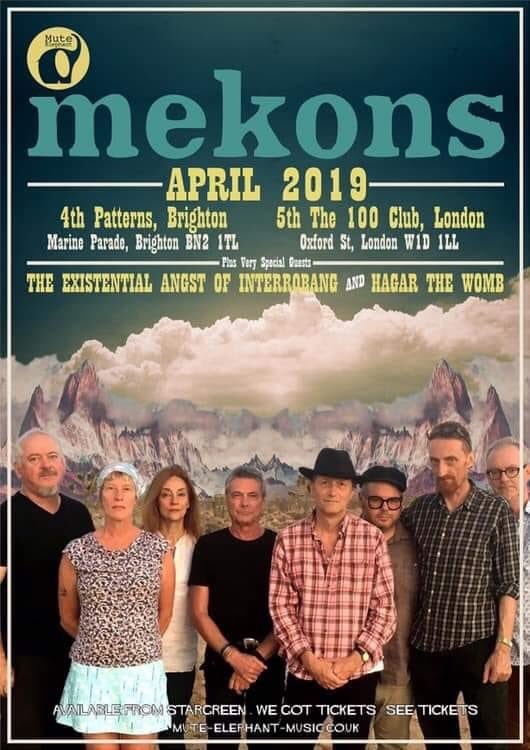 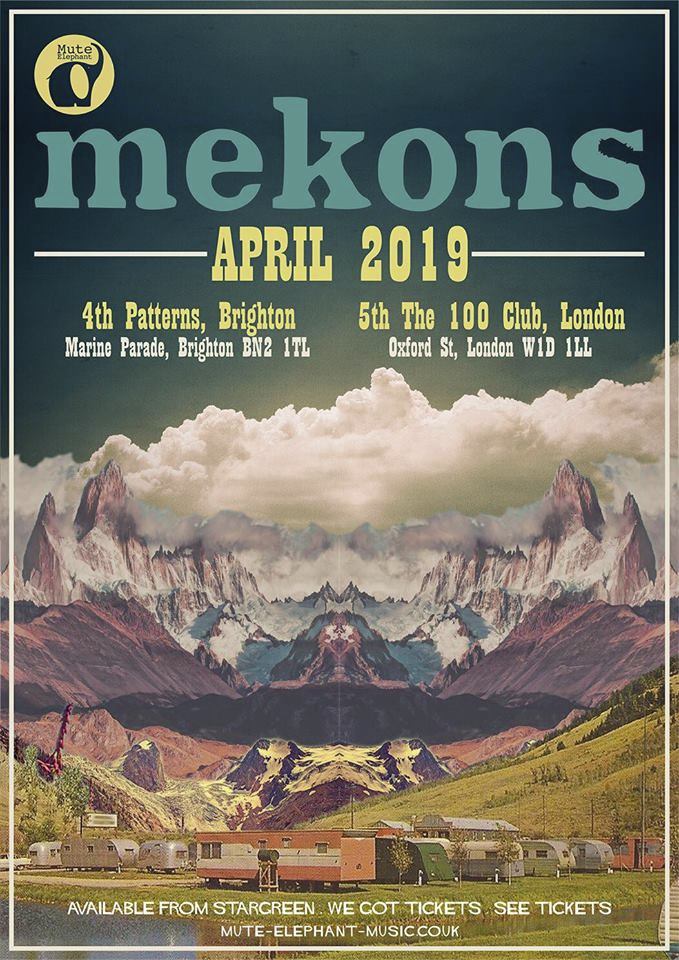