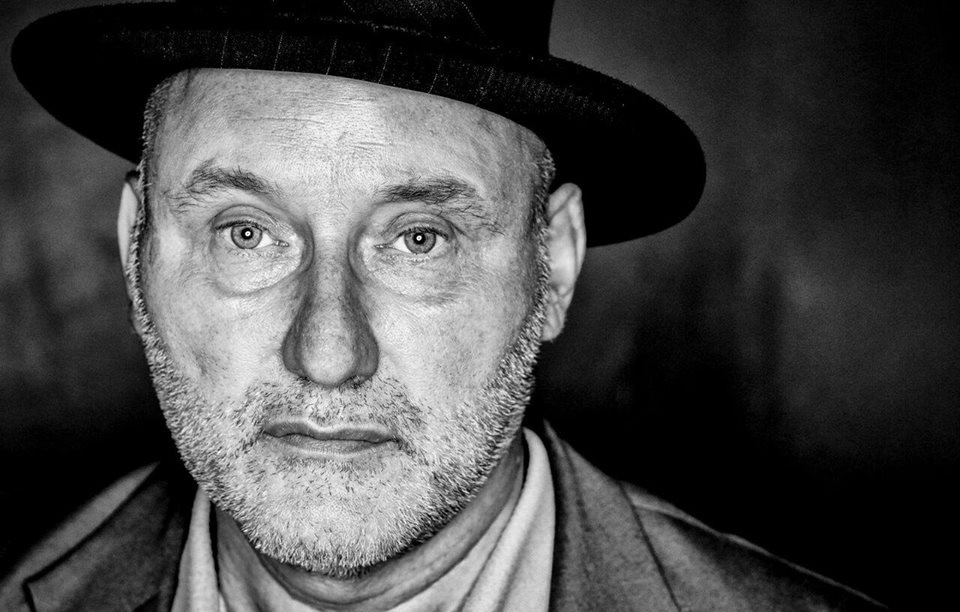 Thankfully tonight we grabbed the last parking space located a short distance away from The Con Club in Lewes High Street, as we were running a tad late. We need not had worried as on our walk to the venue we were passed by this tall imposing character wearing a long white mac. “OMG it’s actually John Wardle“ I hushed to my bemused colleague! At that moment in time he was perplexed as to who this mystery person is. On entering the venue I spoke to this slightly flustered character who was himself running a tad late. It was indeed the one and only Jah Wobble! John Wardle being his real name of course!

Despite the flyer stating to the contrary, there was no support act this evening and so we lucky punters were treated to a full two hour set from Mr Bass Dub himself!

He was joined on stage by his trio of younger chaps, namely Marc, Chungy and George who are Jah Wobble’s Invaders of the Heart. 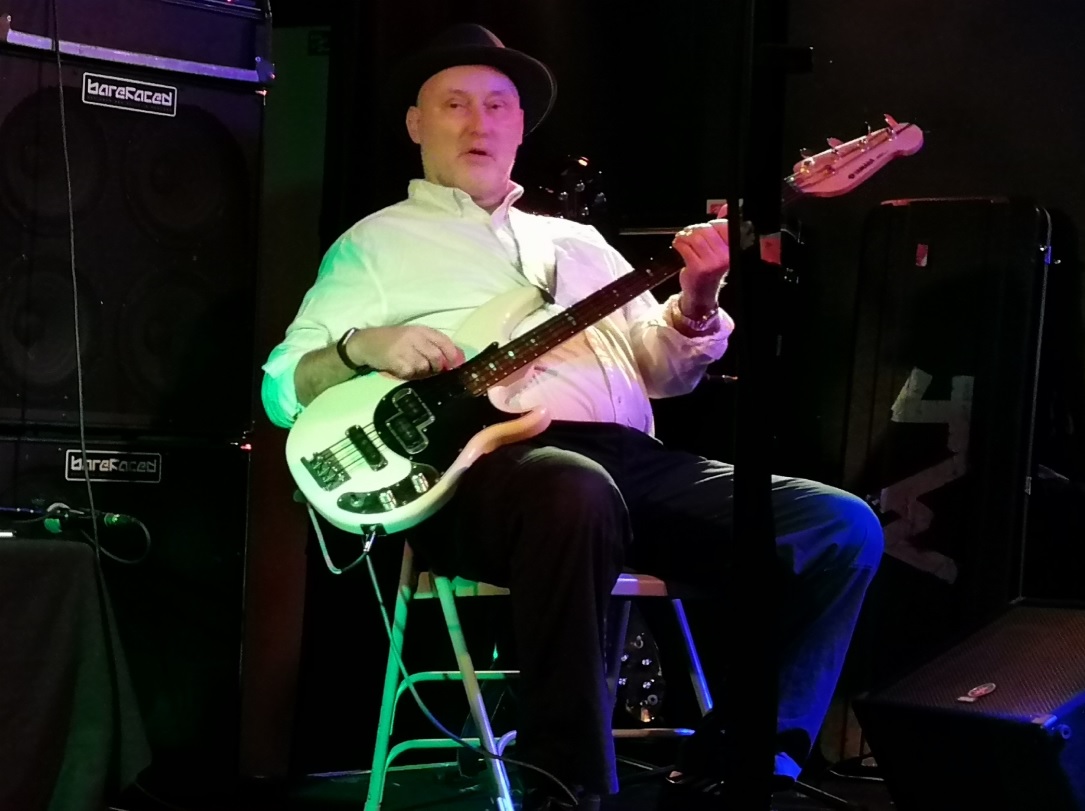 Over the past three decades or so, Jah Wobble has ploughed his own furrow as a prolific solo artist, as well as becoming a well-respected session musician, with a genuine passion for Eastern and Global music. He has worked with a diverse range of musicians, including Baaba Maal, Björk, Primal Scream, Brian Eno, Sinead O’Connor, Dolores O’Riordan, and Chaka Demus and Pliers.

Stepney born East Londoner Jah Wobble began his musical journey when he met John Lydon (aka Johnny Rotten) and John Simon Ritchie (aka Sid Vicious) at London’s Kingsway College in 1973. It was Vicious who not only nicknamed John ‘Jah Wobble’ after a drunken binge, but also loaned him his first bass guitar.

Wobble’s distinctive ‘low end’ bass became the backbone of PiL’s pioneering sound on their first two albums ‘Public Image’ aka ‘First Issue’ and its follow-up, the exploratory yet sinister soundscapes of ‘Metal Box’. 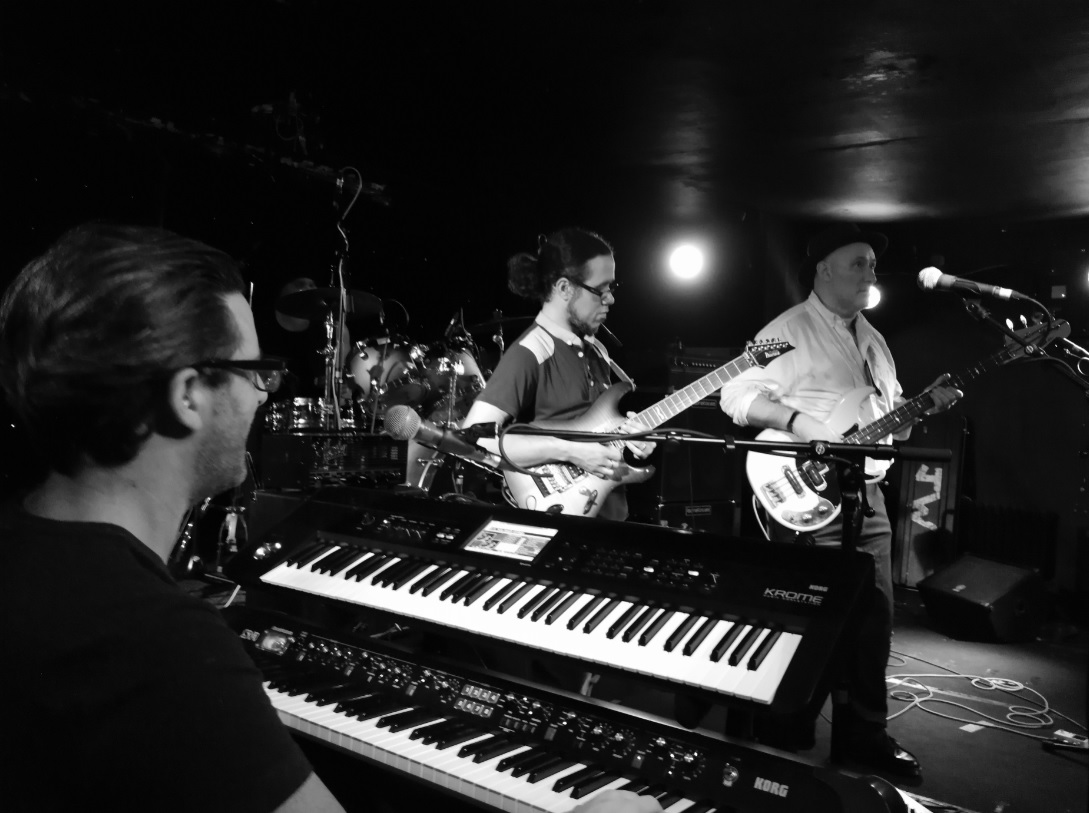 Jah Wobble and the Invaders of the Heart released their debut album ‘Without Judgement’ in 1989 and received a Mercury Music Prize nomination in 1991 for the ‘Rising Above Bedlam’ album, which contained the legendary album opener ‘Visions Of You’ with Sinéad O’Connor on vocals. After the acclaimed ‘Take Me To God’ album in 1994, which featured the now sadly departed vocal talents of Dolores O’Riordan of The Cranberries on the single ‘The Sun Does Rise’, The Invaders of The Heart split. Jah Wobble then launched his own 30 Hertz record label which has subsequently released around 30 albums.

In 2015, Cherry Red Records released ‘Redux’, a six-CD box set that spans nearly four decades of Wobble’s music. In 2017 Jah Wobble & The Invaders Of The Heart released ‘The Usual Suspects’ on 3m Music and this evenings gig would see a vast majority of material culled from ‘The Usual Suspects’ album, as they are up-to-date reworkings of arguably the standout moments from Wobble’s long established career. 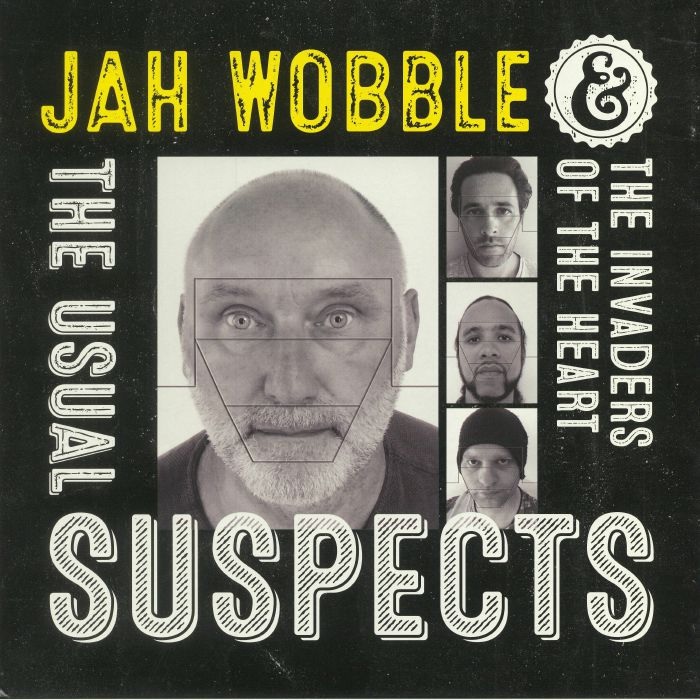 A tad after 9pm and the four guys took to the stage. It’s here that I must confess that my knowledge of Jah Wobble’s output is patchy at best. I have the PiL (Public Image Ltd) albums that he plays bass on and I am familiar with a few of his ‘hits’, but I was blissfully ignorant of a number of his songs performed tonight. For me personally some were awesome and some were less so.

The opener was a freestyle jazz dub stylee track which I found a tad over indulgent, the second track was his naughty vocal rendition of the 1969 ska classic ‘Liquidator’ made famous by the Harry J. All Stars. It was very clear that Mr Wobble is actually a very funny and likeable character as we all enjoyed his copious amounts of East London banter during the set. This was one of the highlights of the evening – the fact that he made it lighthearted and it had a chilled vibe. At one stage he reminded me of Charlie Chaplin with the way he was moving about on the stage. 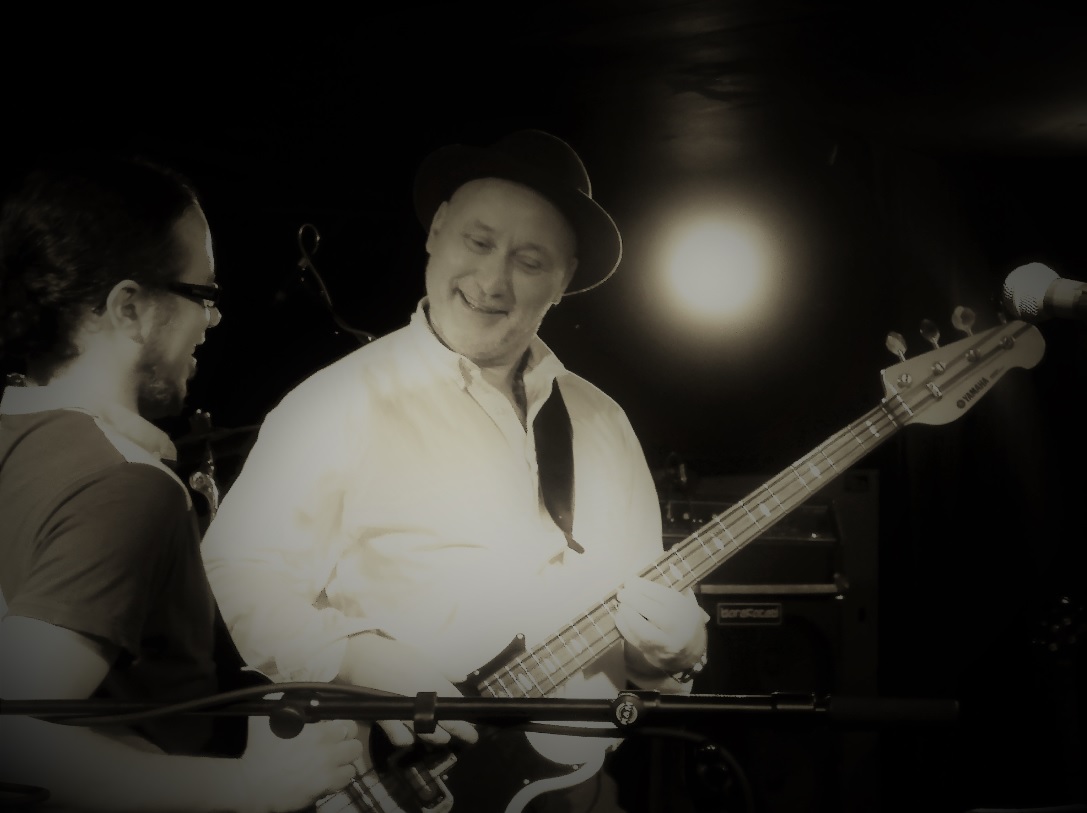 At times I felt as though the gig was a bit of a jam session as I was unfamiliar with a number of tunes, but there’s no denying it that he is a world class bass player! He also has a go at the drums and cowbells too.

My colleague got very excited when the opening bars of ‘The Chain’ came blurting out. Not heard it? I bet you have! It’s better known as the ‘Top Gear’ theme and was originally on some obscure album by Fleetwood Mac in 1977 called ‘Rumours’. The album’s only sold a mere 40 million copies worldwide!

Jah Wobble was plucking away at his bass and the trio were impressively following his lead whilst they played the keyboards, guitar and drums. Then suddenly the vibe for me was ramped up a notch or twelve when the hypnotic swirling notes of the classic ‘Visions Of You’ hit my eardrums. This was a slightly down-tempo version that included the taped female vocals of I would guess Holly Macve, as she appears on the reworked version found on the ‘The Usual Suspects’ album. This was followed by ‘Becoming More Like God’ which also features Holly Macve on the recorded version. This one reminded me a tad of David Bowie’s ‘Fame’. 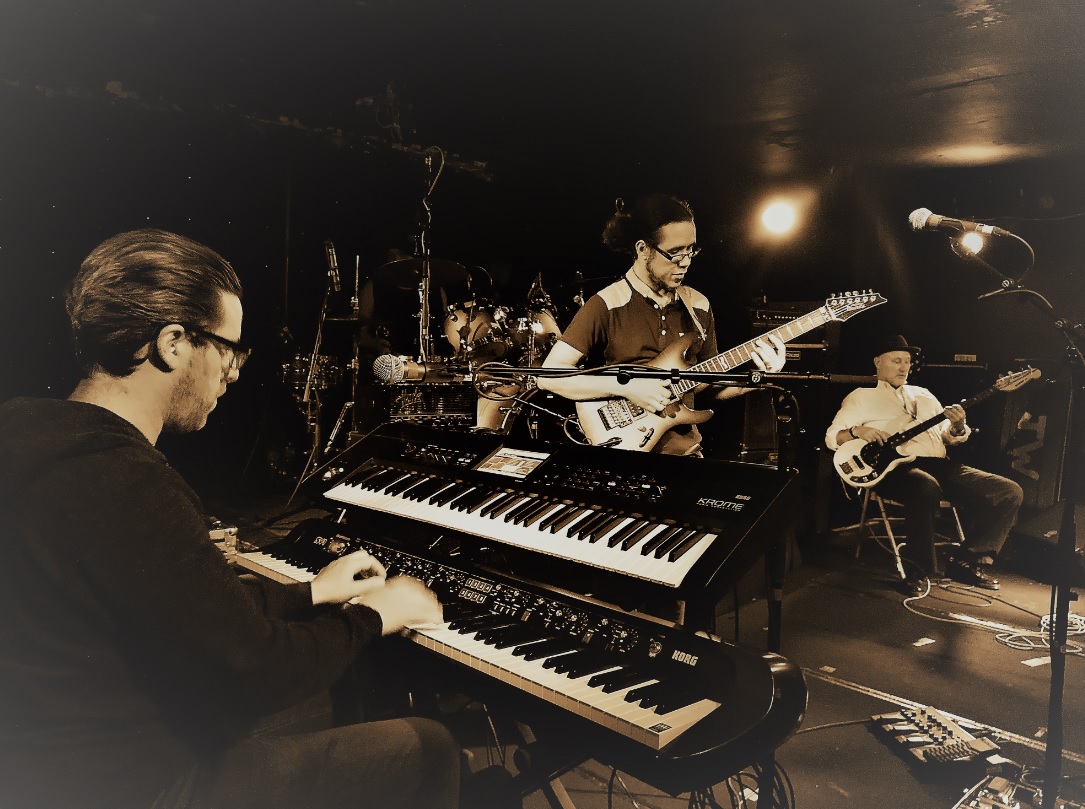 It’s now time to unleash ‘Public Image’, which Jah has radically changed from the famous PiL original. Once they had finished this, they then announced that they would play a Dub Version of the same tune – Happy Days! It sounded great.

We must not forget that Wobble is a pioneer of world music and clearly thinks outside of the box to many musicians. A case in point was the next track ‘Every Man’s An Island’, which to me had a pleasant blend of Arabesque and Cossack sounds with Wobble’s cockney geezer vocals on top.

Suddenly things got all disco with the introduction of ‘How Much Are They?’ which Wobble originally put out with Holger Czukay of Can fame in 1982. Wasn’t expecting that one!

Oh My Word! He’s playing ‘Pop Tones’ from PiL’s 1979 ‘Metal Box’ album. Well this track more than any other tonight whisked me away to tranceland! I was gone! It was totally brilliant and for me the sure fire highlight of the night. Whereas my colleague picked ‘Visions Of You’, which is quite understandable as he is a few years my junior and 1991 was a terrific year of music for him. Me being older, PiL were more relevant! 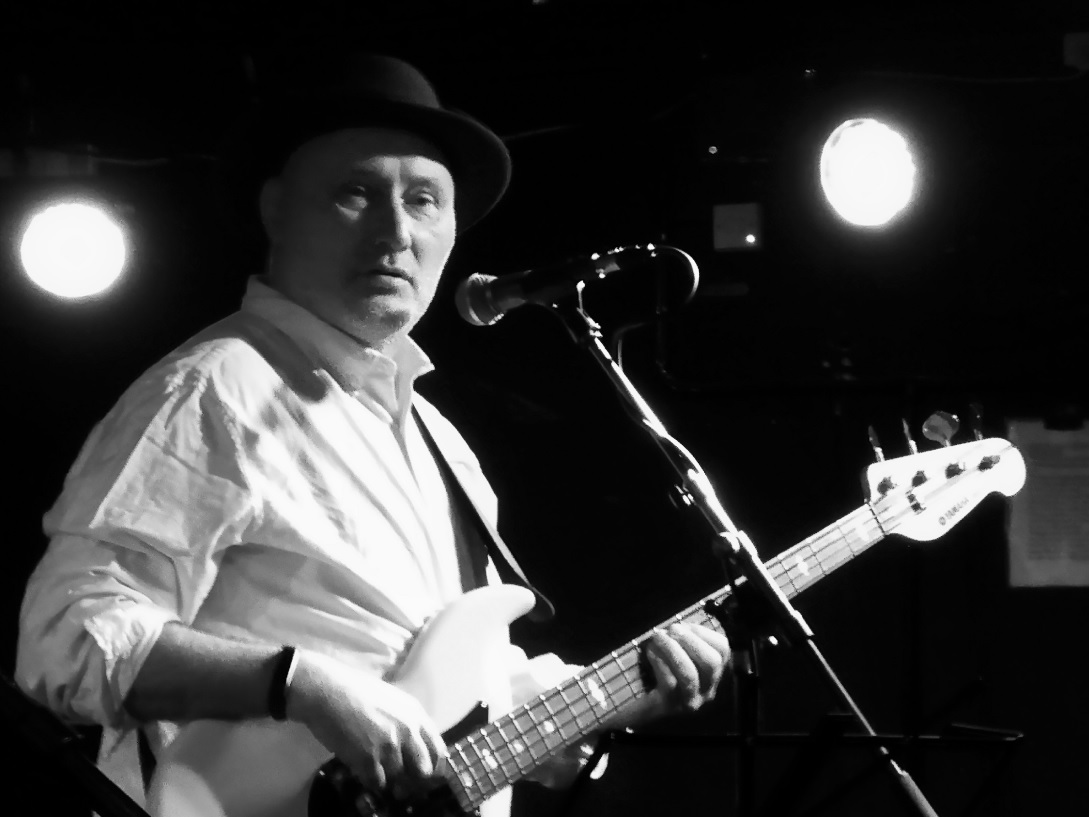 The venue was rammed and poor old Jonathan the sound guy was getting a grilling from Wobble about taking the keys down and do this Jonathan and do that Jonathan. Mr Wobble clearly has a naughty streak in winding people up!

Next up the theme from the film ‘Get Carter’ which incidentally The Human League also covered on their famous ‘Dare’ album. Tonight’s version was an extended version clocking in several times longer than that of the version released by Sheffield’s finest exports. Wobble’s version reminds me of The Doors ‘Riders On A Storm’ verses freestyle jazz.

Next up drum/dub and bass. Yes really. He played ‘Socialist’ from ‘Metal Box’ and then suddenly it had morphed into the theme from ‘Midnight Cowboy’. God I love the original.

Wobble ended ‘Molecules’ and then a quick poem which I think might have been called ‘Ringo Starr’. And that was it, two hours of a mixed bag with some hits and some misses, but overall enjoyed being with the great man – chuffed I went. 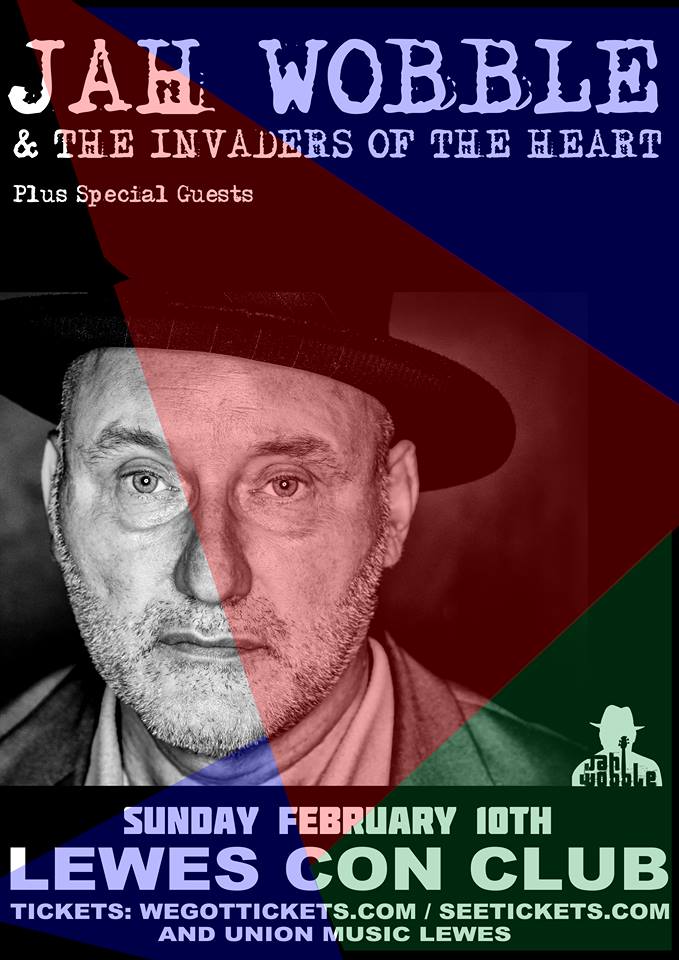