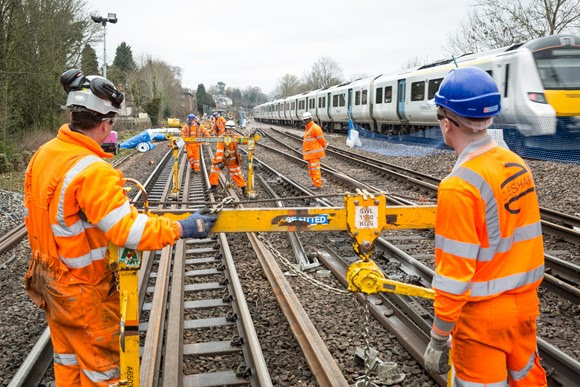 The half-term closure of the Brighton mainline from Saturday for nine days for work on a £67million upgrade is looming.

The closure was originally meant to take place last October, but was postponed after commuters still feeling the pain from the May timetable changes chaos complained.

Engineers will work on what Network Rail says is the biggest refurbishment of the line between Three Bridges and Brighton in more than 30 years, with track junctions, signalling and embankments upgraded and new technology installed.

There is also extensive work within four Victorian tunnels to stop leaks and drainage issues, which have caused significant delays for passengers in the past.

It says up to 300,000 Southern and Thameslink passengers a day will benefit – but most of those will currently be making plans to avoid travelling or make other arrangements next week.

In a special passenger survey monitoring the quality of information for this scheme, independent watchdog Transport Focus said awareness of the closure remains high, while three quarters of passengers are considering alternative travel arrangements, including 200 rail replacement buses.

John Halsall, managing director, Network Rail South East route, said: “This work is absolutely critical as this stretch is one of the most unreliable parts of the network, accounting for half the delays to trains arriving from the south into central London.

“We know it’s never a good time to close the railway, but the only alternative would have been to close the line for 84 weekends over the course of two years.

“Doing the work over this nine-day period means we can achieve so much more and deliver the punctuality and reliability benefits to passengers much sooner, plus the railway is much quieter during the school holidays.

“Working with our colleagues at Govia Thameslink Railway, we are making every effort to enable those passengers who need to travel during this period to do so comfortably.”

Partly funded by the Department for Transport as part of a wider £300m programme, the project will tackle delay hotspots and boost reliability on one of the busiest and most unreliable parts of the network.

The work will renew and upgrade track junctions and signalling, shore up embankments to reduce the risk of landslides and introduce new technology that not only detects potential problems before they occur, but can help the railway recover faster if there is a fault.

This is supported by the temporary conversion of the Three Bridges station car park into a bespoke bus hub, equipped with toilets, a customer information point, refreshments and extra staff on hand to help passengers.

Keith Jipps, GTR’s Infrastructure Director, said: “While we are putting on over 200 rail replacement buses and bringing in hundreds of additional staff, I’d urge passengers to consider alternative routes, working from home if possible or travelling outside the rush hours. It will take much longer to make your journey with travel times extended by as much as one hour.

“The train via Littlehampton is the best alternative to and from Brighton and for other journeys we’ll have buses and coaches in circulation every day on nine core routes, many of them connecting with a dedicated bus hub at Three Bridges.

“While we will be very busy travelling to and from Three Bridges and London at peak times, there will be less demand for trains and buses to the coast and Brighton outside the rush hour.”

Keith Jipps added: “Passengers at these eight stations will be particularly inconvenienced which is why we’ll be carrying out all sorts of works, from deep cleaning or giving them a lick of paint, to replacing footbridges and repairing roofs.

“We’ll also be litter picking hotspot areas, tidying up plants and hedgerows and doing lots of other minor work to brighten the stations up for passengers when they return.”

You can find more about alternative ways of getting to London at BrightonMainLine.co.uk and via www.nationalrail.co.uk.