Phoenix Gallery set to get go ahead to open bar 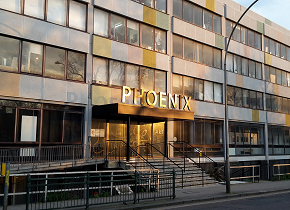 More special events are planned at the Phoenix art gallery, with a bar being the icing on the cake.

The charity which runs the artists studios, gallery and workshop space in Waterloo Place, Brighton, is setting up a café operating during the day with plans to sell alcohol.

It also wants a mobile bar set up in its gallery space during special events which it plans to hold on a weekly basis.

Sussex Police and Brighton and Hove City Council licensing department wanted strict conditions including limiting alcohol sales hours and the number of people allowed in as the gallery is in the city’s Special Stress Area.

There are limits on new licences in this area due to concerns about alcohol-related crime and anti-social behaviour.

Phoenix executive director Sarah Davies said: “Our ambition is to create an accessible building and be a contemporary arts centre.

“We are not regularly funded, so we do not have any regular funding to pay for our building.

“We don’t have property developers breathing down our neck but we need to maintain our building.”

A new business plan is to build up the income from events to help pay for building maintenance.

She told the committee the gallery was active within its community, including the newly-formed Hanover and Elm Grove Forum and Phoenix Estate’s Residents Community Association.

Ms Davies added: “We wouldn’t do anything to harm the relationship with the community.

“That will not happen. We are proud that we are very much part of the community.”

Events coordinator Gabby Gilmore told the panel when she took on the events role it soon became apparent that alcohol sales were essential.

The gallery had worked with police and the licensing department and during the panel session agreed to reduce alcohol sales hours from noon until 10pm.

Sussex Police was concerned about numbers attending the 500 capacity venue and the gallery team was worried about introducing CCTV to areas where it holds life-drawing classes and family friendly events for children.

It was agreed to restrict acohol sales to the gallery, Green Room workshop space and café only.

During the day alcohol sales would be restricted to people seated at the café, which extends along a corridor to the front of the building, who are served by waiting staff until 5pm.

Daytime events outside the café area would be restricted to a mobile bar in the gallery, which would include the Green Room during the evenings only.

In response the gallery team agreed to use temporary event notices (TENS) for special extended events and any use of SIA staff would be subject to a written risk assessment for larger gatherings.

All the adjustments to the licence application meant Sussex Police and the council’s licensing department accepted the terms.

Speaking at the end of the panel Councillor O’Quinn said: “Licensing is a big responsibility for all of us, the licensing department, police and councillors.

“Our main thing is to keep people safe and make sure things work well and we have some form of balance.”

The official decision will go out to the gallery within five working days.

It currently houses 120 artists studios as well as gallery space and workshop rooms on the ground floor.

There are two entrances as it was built in two halves as the owner of 9 Waterloo Place refused to leave her house.

Once she died in 1974 her home of 50 years was demolished and the office block became one building.