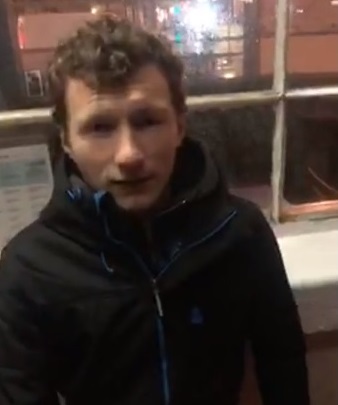 An after-school club supervisor who was “caught” by self-styled paedophile hunters has been given a caution and moved out of the city.

Edward Hartfield, 26, was lured to the Old Steine on 26 January by someone who said they wanted to buy a t-shirt from him which he had listed on eBay.

But the buyer was actually a member of Innocent Voices, which filmed the encounter and streamed it live on social media.

They had lured him there after pretending to be an underage girl in a separate encounter in which they claimed he attempted to groom the fictional child.

Hartfield, who was then living in Woodingdean and working at St Luke’s Primary School, was arrested by Sussex Police that evening and charged with engaging in sexual communication with a child the following day.

He was due to appear at Brighton Magistrates’ Court this morning, but the case was discontinued at the eleventh hour.

A police spokesman said: “Following further detailed police enquiries, working in close liaison with Brighton and Hove social services, and after careful consideration, the CPS have now agreed to discontinue the prosecution.

“Offences of this type are taken very seriously, but each case must also be assessed taking into account the specific circumstances. The decision to discontinue the prosecution by CPS and police has been based on a number of factors.

“The offence did not involve any attempt to meet the fictional ‘girl’ and there are confidential personal issues relating to the defendant which have also been taken into account in arriving at the decision.”

Hartfield, who admitted the offence, has been given a formal police caution, which means that the record of the case will be on the Police National Computer, and he will be a registered sex offender for two years, subject to police supervision under the Multi-Agency Public Protection Arrangements (MAPPA).

Hartfield has moved away from Sussex and the address at which he is now living is not being disclosed.