Neighbours and Sussex Police are opposing a licence bid by Kemp Town Carnival for six or seven bars outside pubs between Upper Rock Gardens and Eaton Place during the event on Saturday 1 June.

Three objections have been sent to Brighton and Hove City Council’s licensing team as well as seven letters of support from residents, arts organisations, a church and bar.

The application is for a licence to sell alcohol from 10am to 6pm and have performances and live music in the area.

In a letter of objection Caroline and Malcolm Walker raised concerns about excessive drinking, noise and anti-social behaviour.

They said: “This would no longer be a ‘village carnival’ with tables in the street attitude as it used to be but a big roaring uncouth drunken excuse for a weekend.

“Let is stay exclusively in the village area and please control the excessive drinking.

They said that the last carnival three years ago spread up the Rock Gardens crossroads giving a “good example of how things had started to go wrong”.

Another neighbour Hector Ktorides also raised concern about the number of toilets, particularly as portable loos outside his home overflowed. He described the carnival as a “victim of its own success”.

Mr Ktorides said: “The organisers hijack the area totally dismissing the needs and the voice of the people that live in the midst of it all, ignoring the concerns of locals and doing as they please.

“I can no longer see how the carnival is of benefit to the local community and the event has become a lot to ask for the residents to tolerate.” 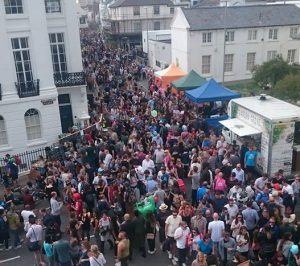 Sussex Police is also concerned about the size of the area covered by the licence and whether off-sales would be included.

Chief Inspector Di Lewis said: “The footprint of the event is far bigger when comparing it to the fully fenced-in Pride Village Party.

“Sussex Police are not convinced the the event organiser’s will be able to exercise any degree of control over it.”

Organisers have held meetings with Sussex Police but Chief Inspector Lewis said that there were still serious concerns.

The force is not satisfied with the process in place to deal with lost children and vulnerable people or an evacuation procedure to move thousands of people across the A259.

There is support for the event from arts organisations and one of the churches in the area.

He said: “In my opinion Kemp Town Carnival is one of the most community-friendly events of its kind.

“I have never witnessed crime or disorder and willingly take my young children to it without any sense of harm.”

St Mary’s Church venue manager and churchwarden Katherine Prior also wrote in support as the church was an assembly point for the parade and offered tea, coffee and a chill-out space during the 2016 event.

She said: “The Kemp Town Carnival is one of the community highlights of our year and we have been pleased at the prospect of its return after a two-year break.

“We have been impressed on previous occasions by the organisation and consultation that have gone into planning and delivering the carnival.”

A council licensing panel, consisting of three councillors, is due to decide the application at Hove Town Hall on Monday (25 March). The hearing is scheduled to start at 10am.