Two people have been arrested in Brighton as police seized what they believe to be half a kilogram of cocaine – or just over a pound in weight – with an estimated street value of £50,000. 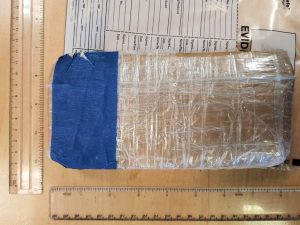 The arrests were made near Fiveways yesterday (Thursday 11 July), Sussex Police said today.

The force said: “A police operation in Brighton and Hove on Thursday (11 July), aimed at tackling knife and drugs crime in the city, has resulted in seizure of a package of what is believed to be cocaine with an estimated street value of £50,000.”

PC Nick Simmons said: “We stopped a BMW car in Edburton Avenue and one of its occupants ran off.

“A bag he was seen to throw into a garden while being pursued was recovered and he was detained.”

Sussex Police said: “Tests are now being carried out on the half-kilo package to determine its contents, suspected to be cocaine.

“Two men from south London have been arrested, one on suspicion of possessing a Class A drug with intent to supply and the other for being concerned in its supply.

“Both have been bailed until (Monday) 5 August pending further investigation.”