It was Absolutely Bowie at the Concorde 2 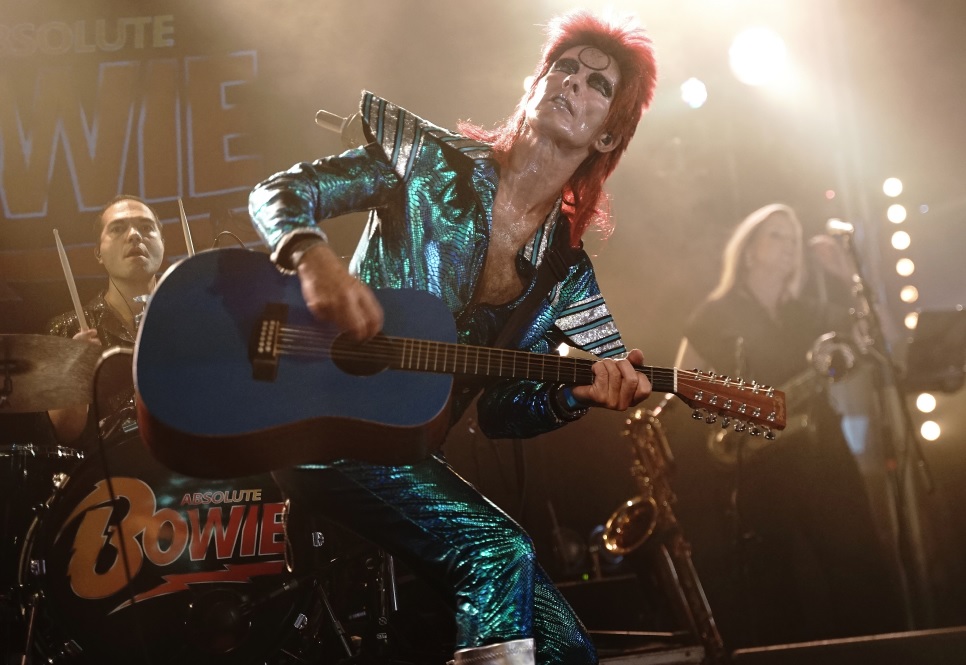 I have to honestly say that it was with great trepidation that I ventured to the Concorde 2 in Brighton this evening in order to see a tribute act perform. I’m certainly not a fan of all things tribute other than one or two exceptions, as I find them relatively sad and a poor imitation of the real thing. They can have a severe whiff of Butlin’s Bognor or ‘celebrity’ cruise ship tours about them. I’d much rather have a brand new local band really going for it with their own material than watching saddo copyists. On the face of it, things weren’t going to bode well for Absolute Bowie then!

When you take into consideration that some Godly artists are untouchable and it is a crime against humanity to even think of covering one or more of their compositions, and so to me David Bowie is one of those artists, especially as I have been him in the flesh live and bought his records and CD’s across the decades. But then when you suddenly find out that Absolute Bowie were the Winners of the ‘Best Bowie Tribute’ and ‘Best Tribute Band in the UK’ at the Agents Association of Great Britain Awards in July 2018, suddenly you start to think, “How can this be?”, “Were the judges not of sound mind?”, “Surely they can’t be right, can they?”. Therefore the only option open to me was to broaden my mind and witness one of Absolute Bowie’s concerts.

On arrival, there’s a long queue waiting to get in. Hmmmm hold on a minute, this evening might have sold out again like their previous show did at the same venue back in December last year. The queue was made up of a decent cross section of society and certainly not a clique. Maybe these people all know what they are doing?

Once inside the venue, it is confirmed that there is no support act tonight, just two varying sets from the Absolute Bowie band – the first roughly based around the Ziggy Stardust/Aladdin Sane period in David Bowie’s long and illustrious career and the second half would be his Thin White Duke/’Pop Years’ era.

I had actually spotted (and it wasn’t hard) Brighton based frontman John O’Neill in the crowd at the recent ‘Best Of Brighton’  bash at the same venue. He was wearing a long gown similar to that worn by ‘the real Bowie’ on the ‘Earthling’ album cover. He certainly looked the part if not actually exactly like Bowie. However tonight, the lights go down, the crowd erupts, the band strolls on followed by John – blimmin’ hell he looks so different, exactly like Aladdin Sane – fantastic effort! 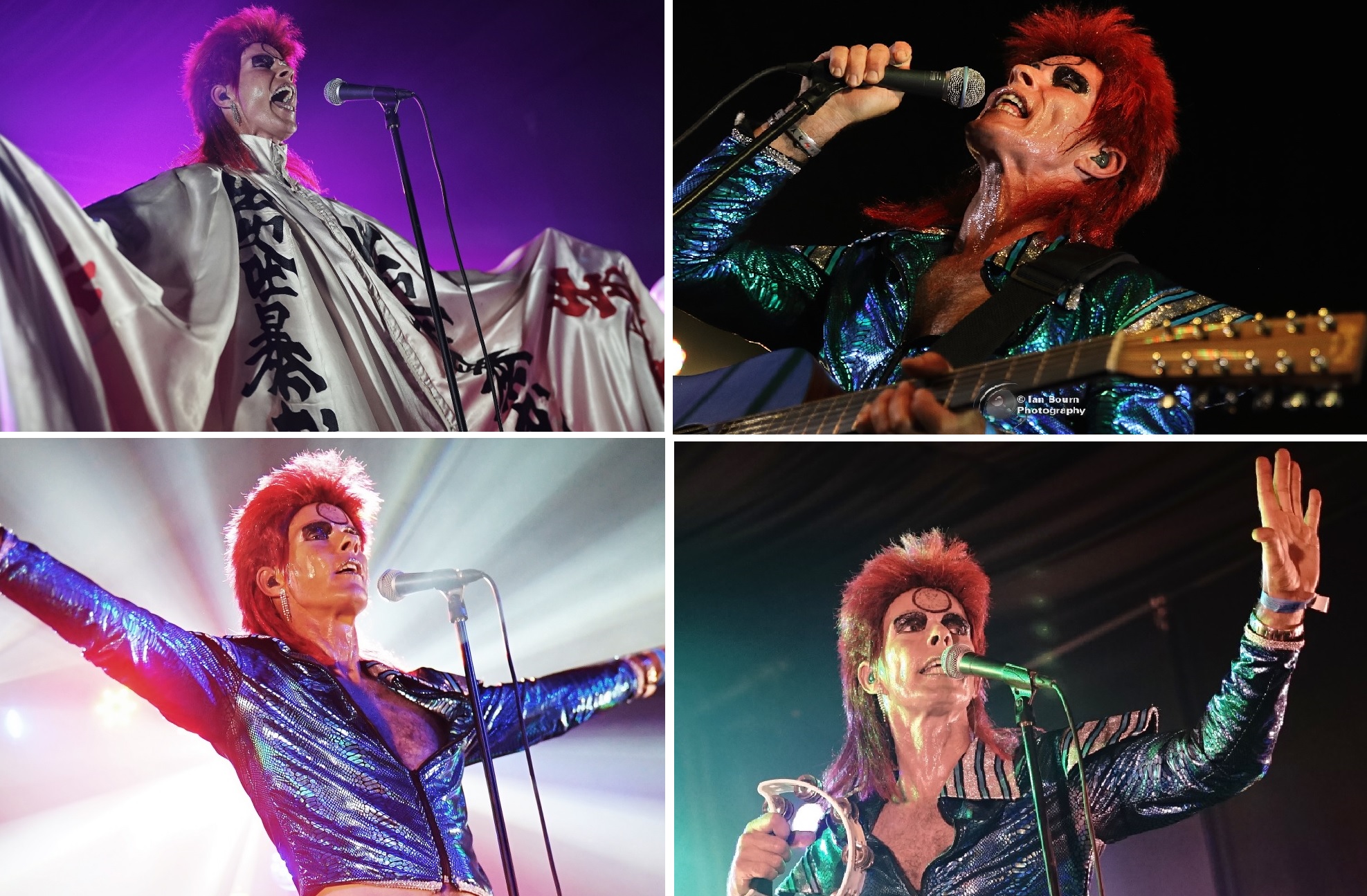 John and his handful of chums which are made up of Chris Buratti on guitar (as Mick Ronson), Fabio Cashio on bass (as Trevor Bolder), Alex Paollilo on keyboards (as Rick Wakeman), Alex Face on drums (as Woody Woodmansey) and Fiona “Fizz” Asbury (Alto/Baritone Saxophones, Flute), launch into ‘Diamond Dogs’. OMG, they DO sound like Bowie!

It’s certainly evident than none of them are ‘Absolute Beginners’, and have no doubt spent thousands of hours practising the notes and especially in John’s case, every movement, and I mean every choreographed movement. I have seen many Bowie videos down the years, and obviously so has John – No doubt time and time again. I bet he has a full length mirror in his house to practice, as he has clearly got it down to a tee.

Surely they couldn’t keep up the cloning, could they? Tunes came and went, and were certainly bang on the money. Not obvious choices in covers being ‘Watch That Man’ and ‘Moonage Daydream’ which were expertly performed. My preconceptions were being adapted/changed/ground down – there is such a thing as a fab tribute act!

At the end of ‘Moonage Daydream’, Chris and Fabio each grabbed John’s flowing gown and ripped it apart, to reveal a sparkly blue two piece outfit that was staple diet back in the heady days of glam rock. Music often goes around in circles, and of late I have been digging out my old glam rock albums and giving them a spin in order to relive my childhood and see if they have stood the test of time. Those were terrific days and then the mid-1970’s were a severe lull until punk burst in and off we went again.

Meanwhile, back at the Concorde 2 and after another nine Bowie choice cuts, making a dozen in total, that was part one wrapped. About 30 minutes later the sextet were back on stage in different costumes, with John donning the Bowie ‘Let’s Dance’ image complete with Mike Flowers Pops style blond wig.

Part two kicked off with ‘Young Americans’, which was encouraging, which was followed by ‘Modern Love’ and ‘China Girl’. Now to this point, it is totally fair to say that ALL previous 15 songs had actually sounded exactly like Bowie. This was a terrific achievement. The only slight (welcomed) deviation was a decent drum solo by Alex in the middle of ‘Panic In Detroit’. John then announces “A remix” just as ‘Ashes To Ashes’ starts up. It was an extended version and wasn’t exactly quite there on the keyboards front, if I’m totally honest. But having said that, it was still enjoyable.

Surprisingly for me, one of the most powerful tracks on the night turned out to be ‘Look Back In Anger’, they nailed it alright!
John then duetted with Chris on ‘Under Pressure’ as for one song he dropped his Mick Ronson persona and adjusted right into the shoes of Freddie Mercury. Yep, he’s got that one vocally off pat. A 12” version of ‘Let’s Dance’ followed, which obviously went down well. Then after ‘Rebel Rebel’ it was encore time, with a decent version of ‘Space Oddity’ and a newer version of “‘Heroes’” to round things off.

My mate was buzzing, he informed me that never in his life would he have dreamed to be totally blown away by a tribute act, as he too has stayed away from them. In between the sets, I was talking to a lady in front of me that had ventured down to Brighton from Putney in order to see the band with her friend. She had seen Absolute Bowie many times before as had several folks standing around us. Clearly John and the gang have a seriously loyal following of fans. After tonight’s performance I can see exactly why too. Fab night out! Well done to the band and the promoters Black Rabbit Productions. Nice one – more please! 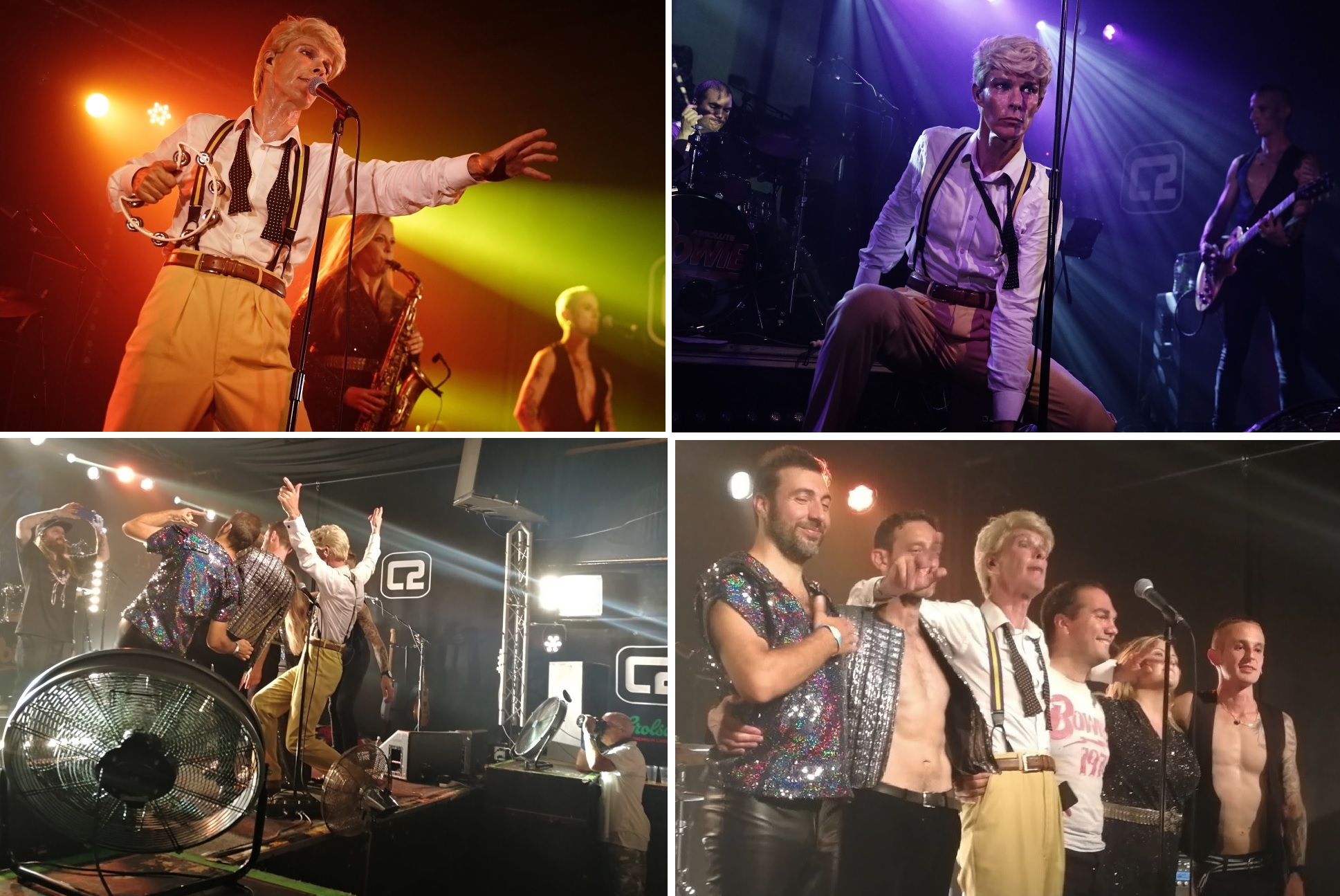