Does anywhere do Pride better than Brighton? 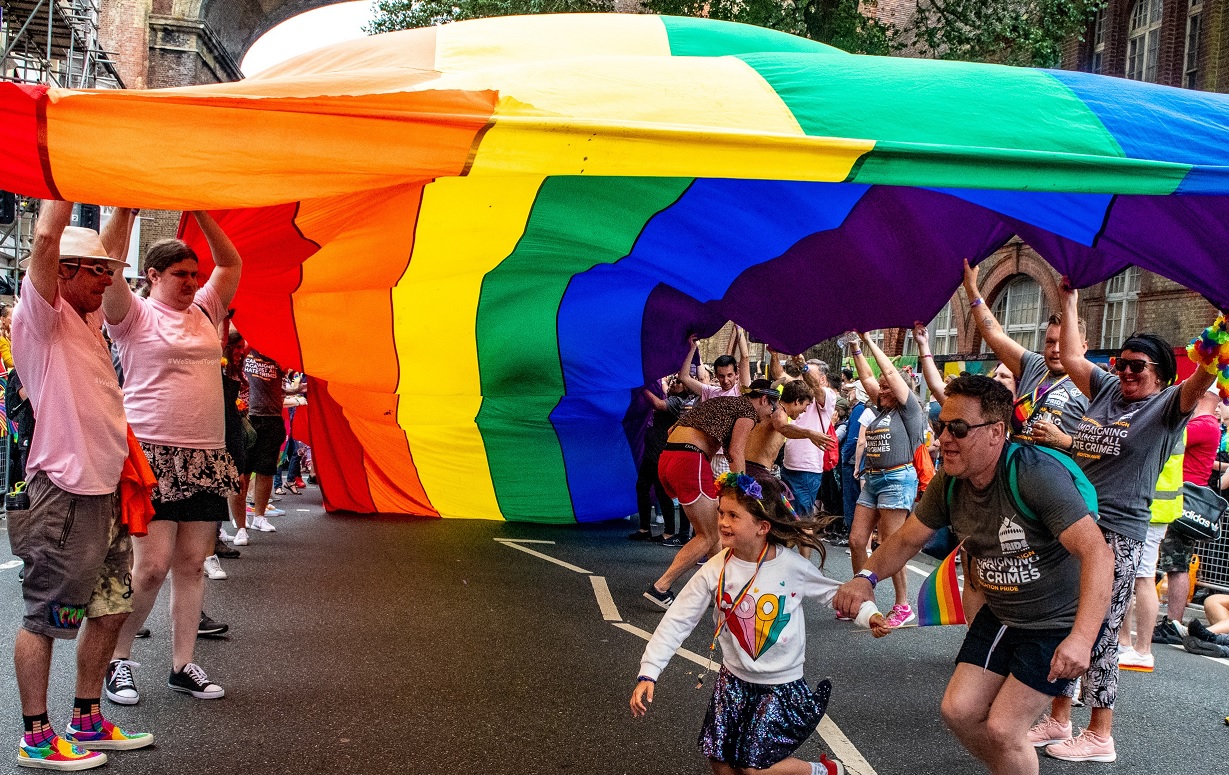 The atmosphere along the Pride Parade route said it all, as people from all backgrounds and walks of life gathered to take delight in the seemingly endless stream of floats and marchers. Beaming faces responded to the cheers of the crowd, and the message was clearly either ‘we’re out and we’re proud’ or ‘we stand together’. 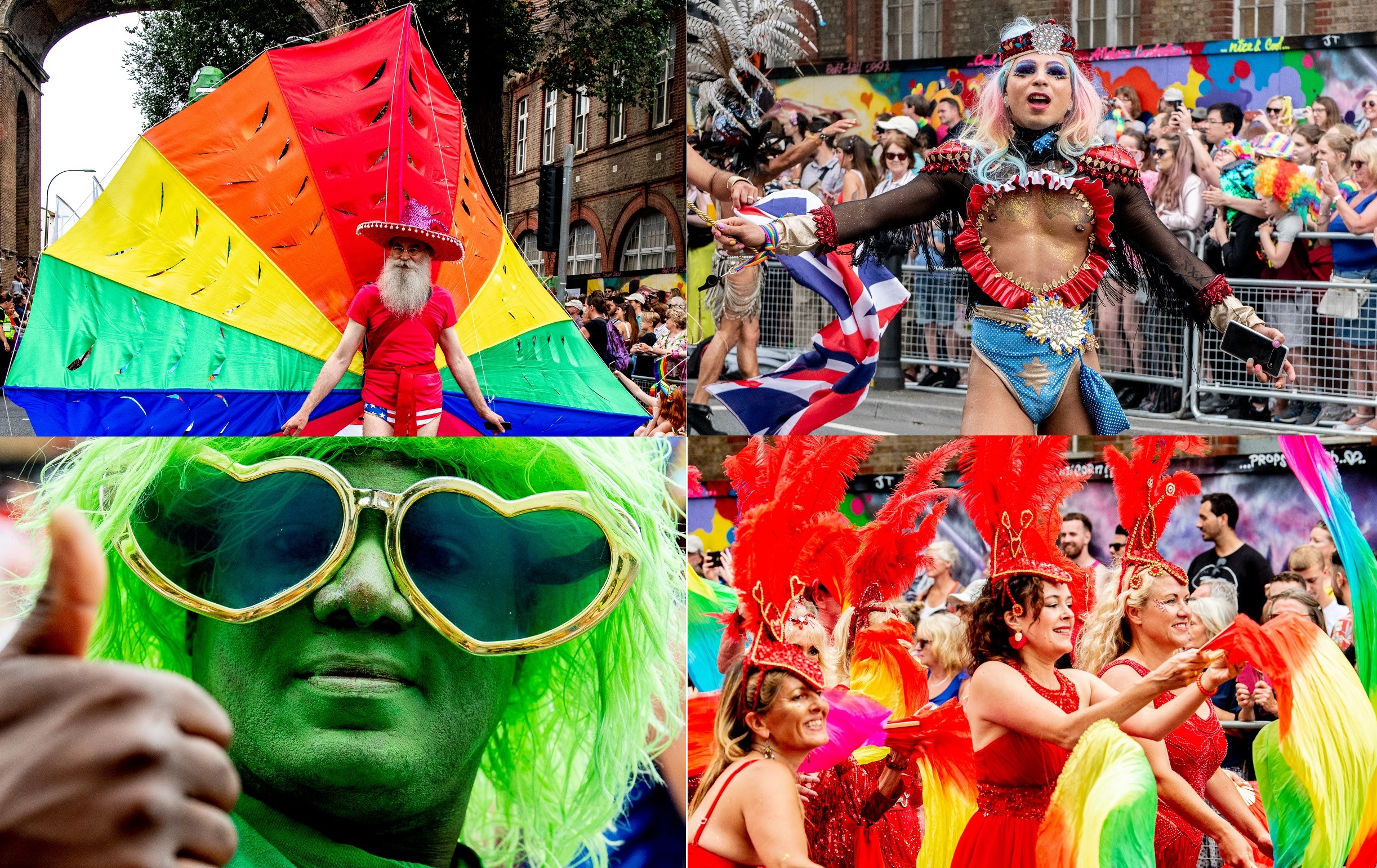 It may have taken fifty years to get to this day, but, as Peter Tatchell said later in the afternoon from the main stage, we have a lot to celebrate since Stonewall. All of the rights and liberties that flowed from that point when the gay liberation movement was born and these have brought us to an era in history where almost every country has it’s own Pride Parades.

However, the struggle isn’t over, because some of those who take part around the world still do so at considerable personal risk, despite marching beneath “the most ubiquitous and celebrated flag in the world today”, and celebrating “the most successful social movement of all time.”

“Pride”, said Tatchell, “transcends all borders – we are the world and we come with a message of love, equality and diversity. But in some countries things are going backwards, and homophobia is state policy. One day we will all be free! This freedom is long delayed, but it cannot be denied.” 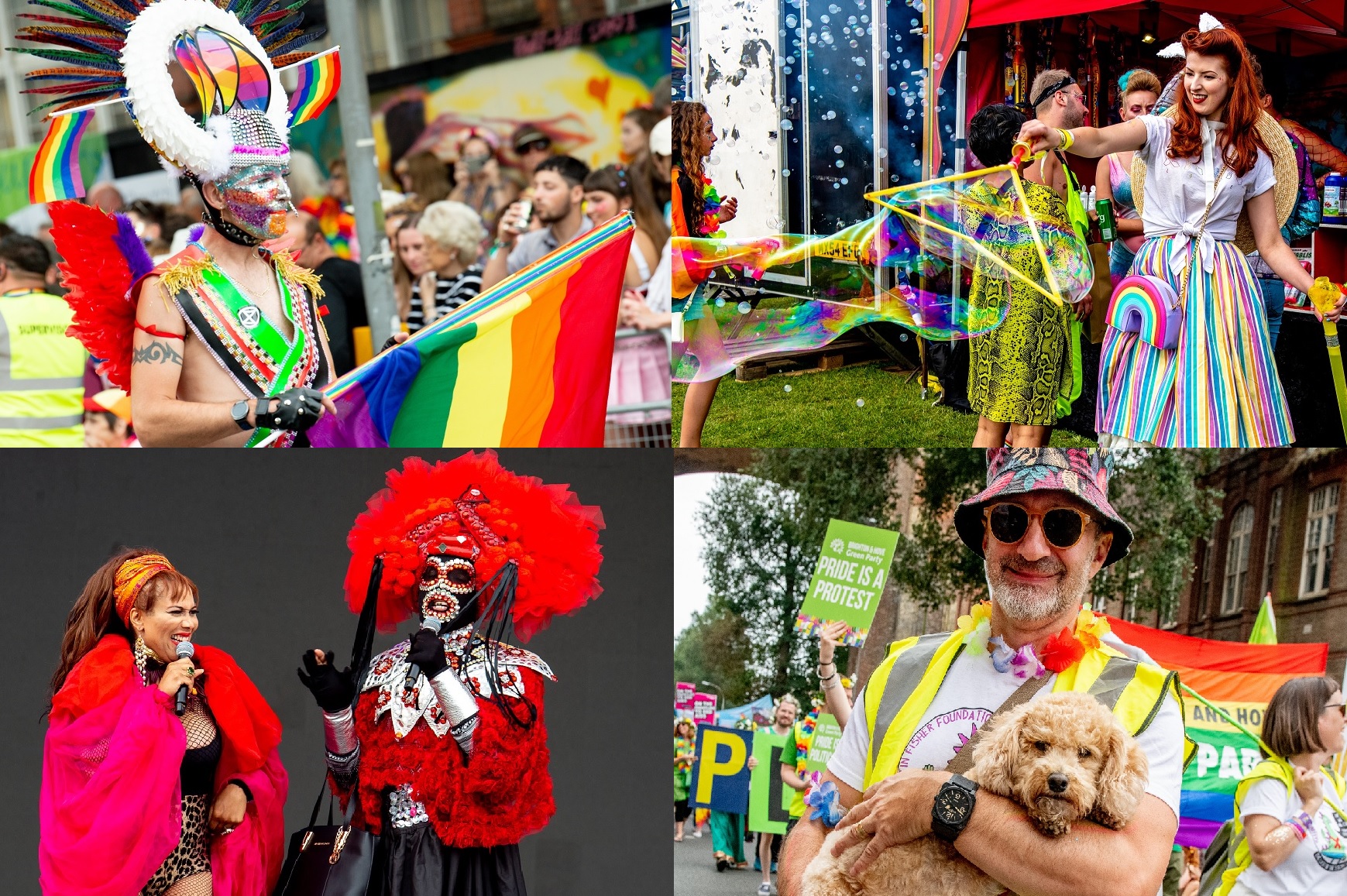 And as the parade made its way to Preston Park (for Pride In The Park) and the music started it was more than evident that the many thousands who had descended on Brighton to mark this special day were all at one with this message.

Each performance came not only with passion, but also with a voice of solidarity that reinforced the power that music has to unite people in a common cause. 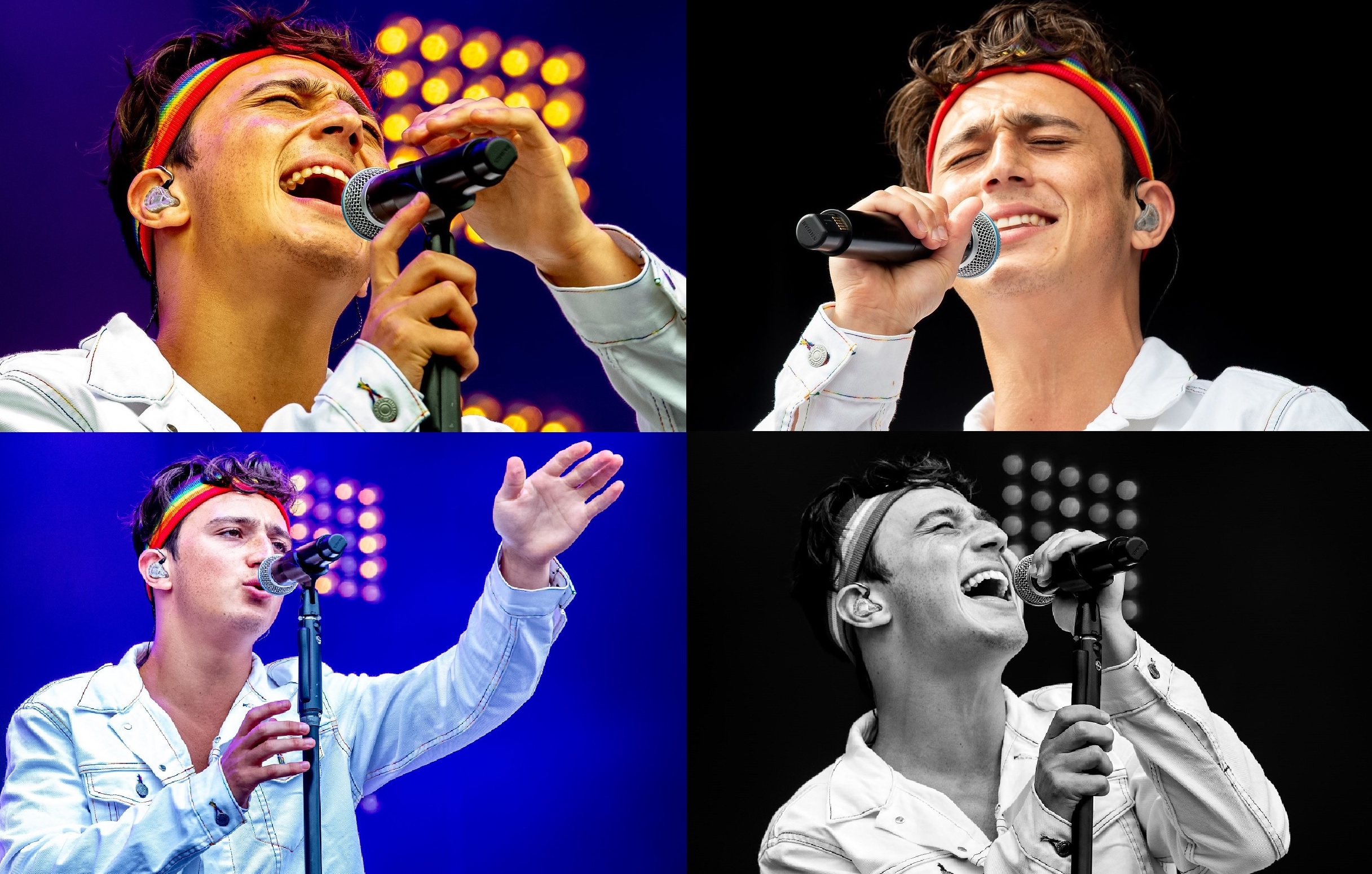 Zak Able‘s smooth and funky grooves were a delightful way to ease into this sunny summer afternoon, and perhaps his most poignant song of the set was the heartfelt ‘Deserve To Be Loved’ which he’s written at a time when he felt down and vulnerable. 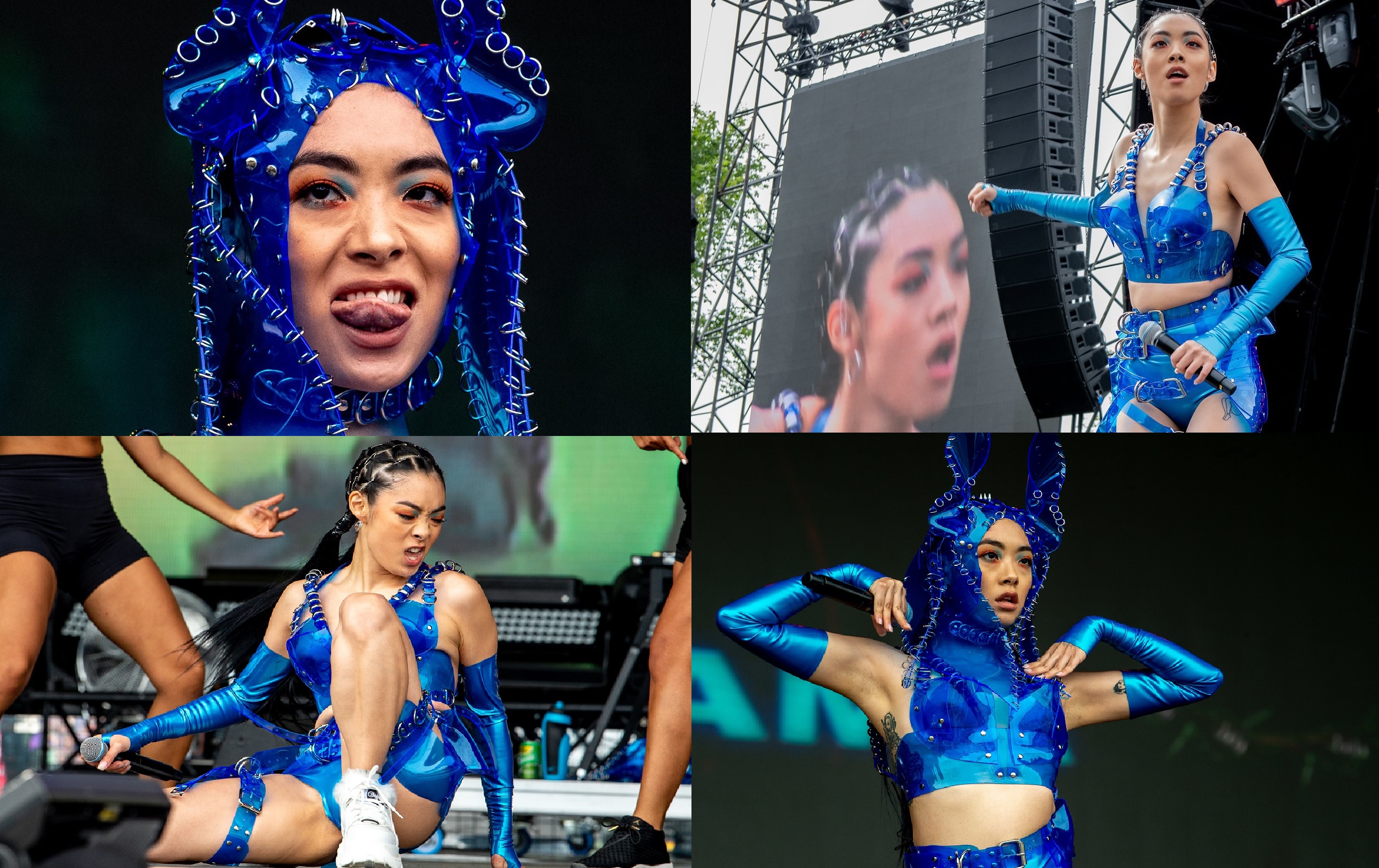 Next up Rina Sawayama, over from Japan, treated the crowds to a polished set of operatic pop, full of pomp and circumstance and carried along by a heavy-duty bass section. Rina’s message included one of respecting the environment as well as respecting one another as she strutted the stage in a dress inspired by the oceanic plastic crisis. 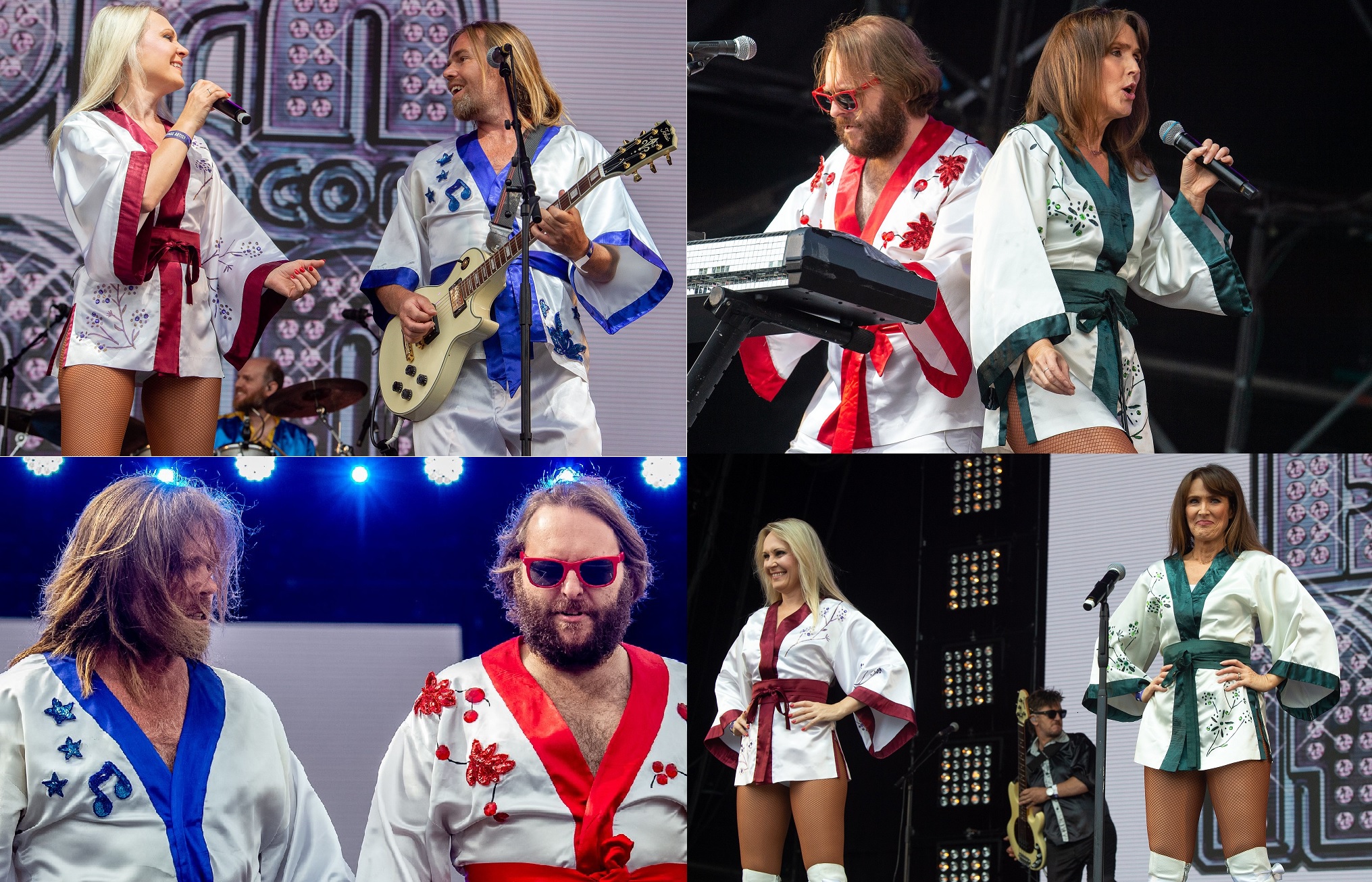 Bjorn Again need no introduction or description – they are who they are and they were an ideal mid-afternoon interlude who drew probably the second-largest crowd of the day. 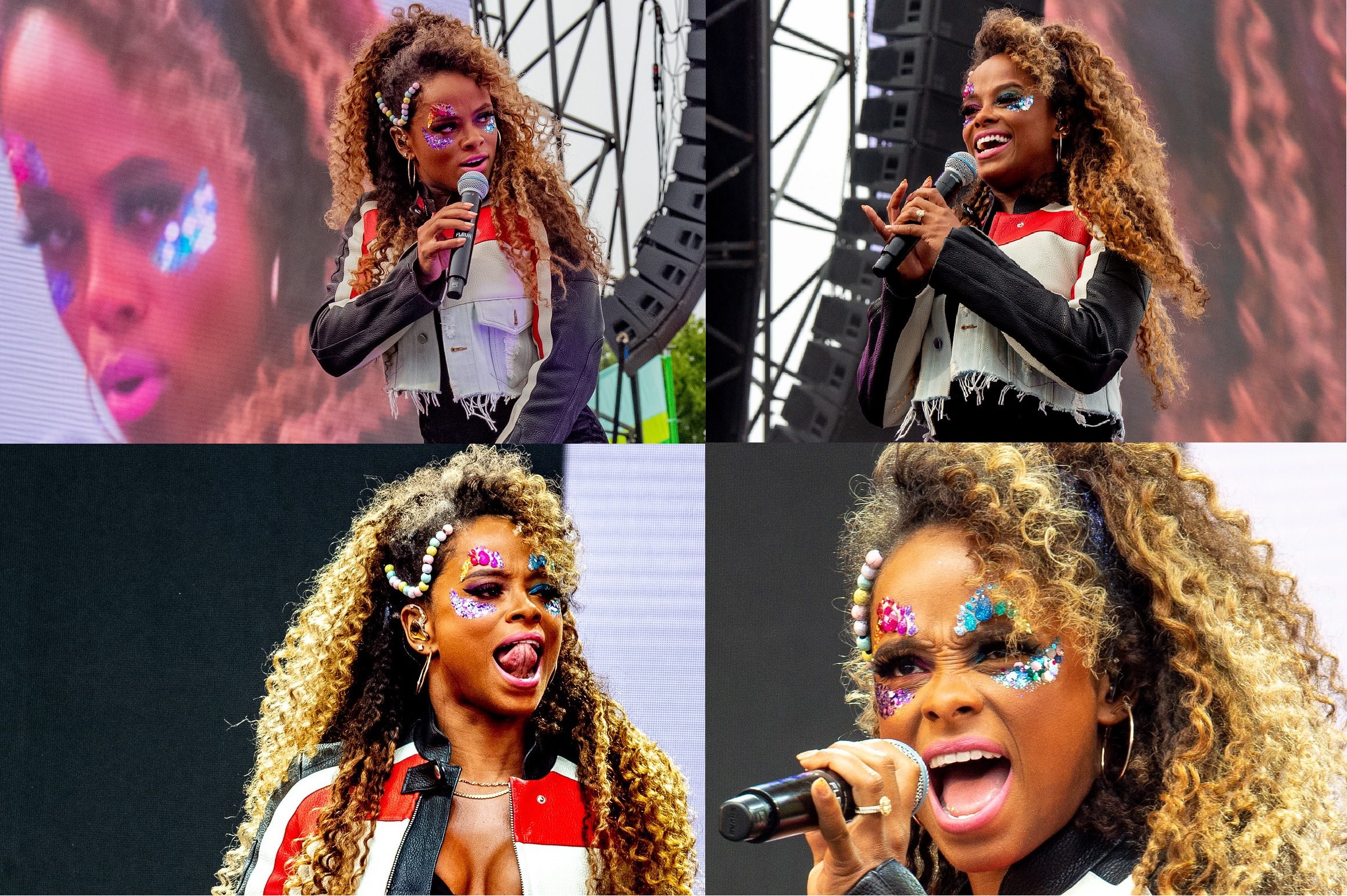 Following an impassioned speech from Peter Tatchell, former X-Factor singer Fleur East gave a great show with songs that were somewhat reminiscent of ‘Off The Wall’ era Michael Jackson, full of squelchy bass-lines and falsetto hooks. 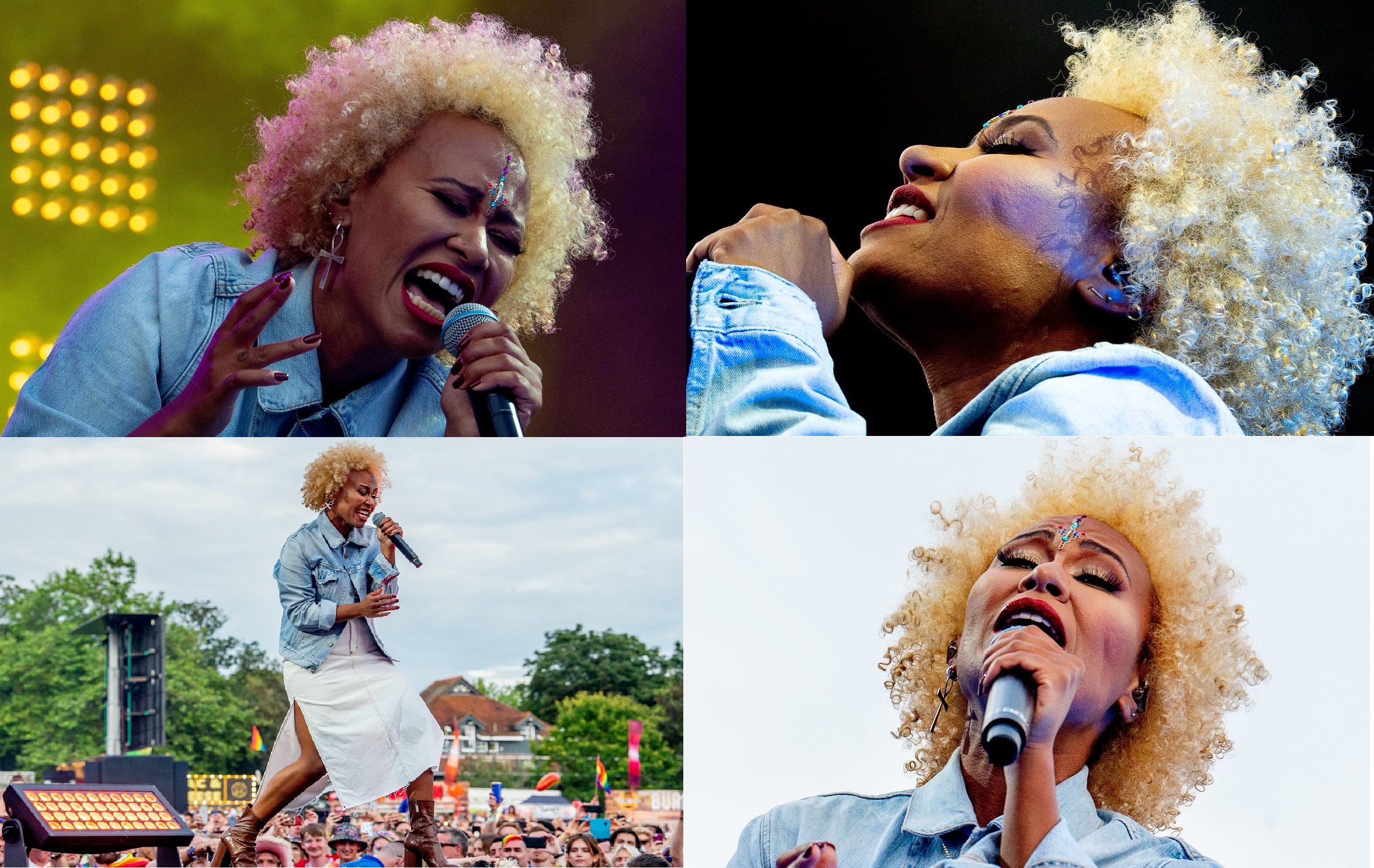 Despite speculation that it may have been Pixie Lott filling the special guest slot the surprise guest for the day turned out to be 2012’s Brit Awards Critics’ Choice award winner, Emeli Sandé.

The Sunderland-born singer spend the majority of her set out in the crowd at the end of the runway, and notable songs were ‘Highs And Lows’ – dedicated to the person you love the most – and ‘Shine’, an exuberant and uplifting piece of gospel driven soul lifted from her forthcoming new album. 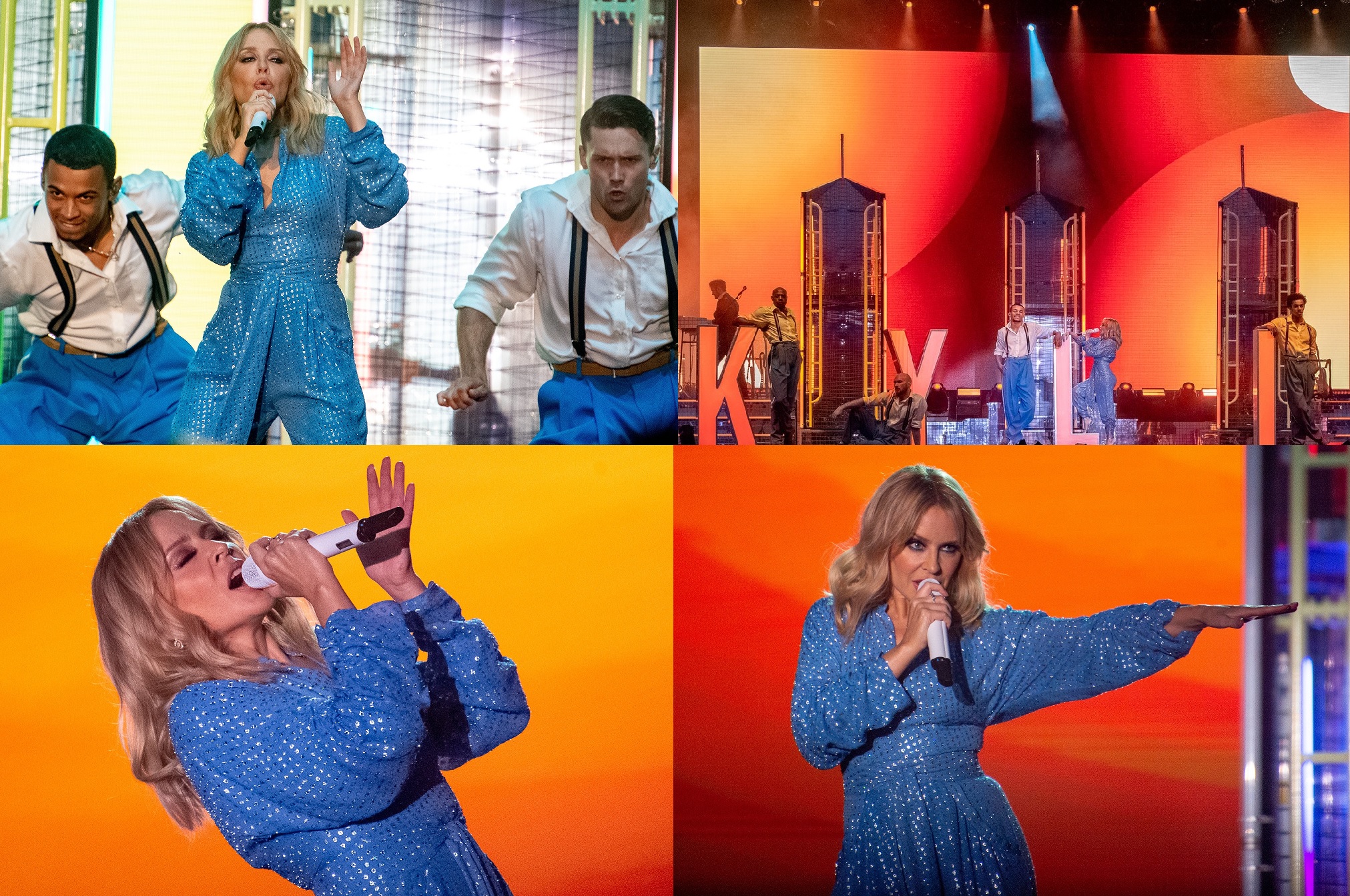 And then of course there was Kylie.

With a stage set and backing dancers taken straight from a Broadway extravaganza, the perennial pop princess flirted with the 55,000 capacity Brighton crowd and gave a 20+ song set filled with instant show-stoppers – from ‘I Should Be So Lucky’ in the first three numbers through to the Nick Cave classic, ‘Where The Wild Roses Grow’.

Finishing with an encore of ‘Dancing’ and ‘Spinning Around’, Kylie was an inspired choice to round off the first day of this Beautiful Price weekend.

Check out our colourful photo album of the Pride Parade & Pride In The Park in Brighton on Saturday 3rd August 2019 on our Music Facebook page HERE. 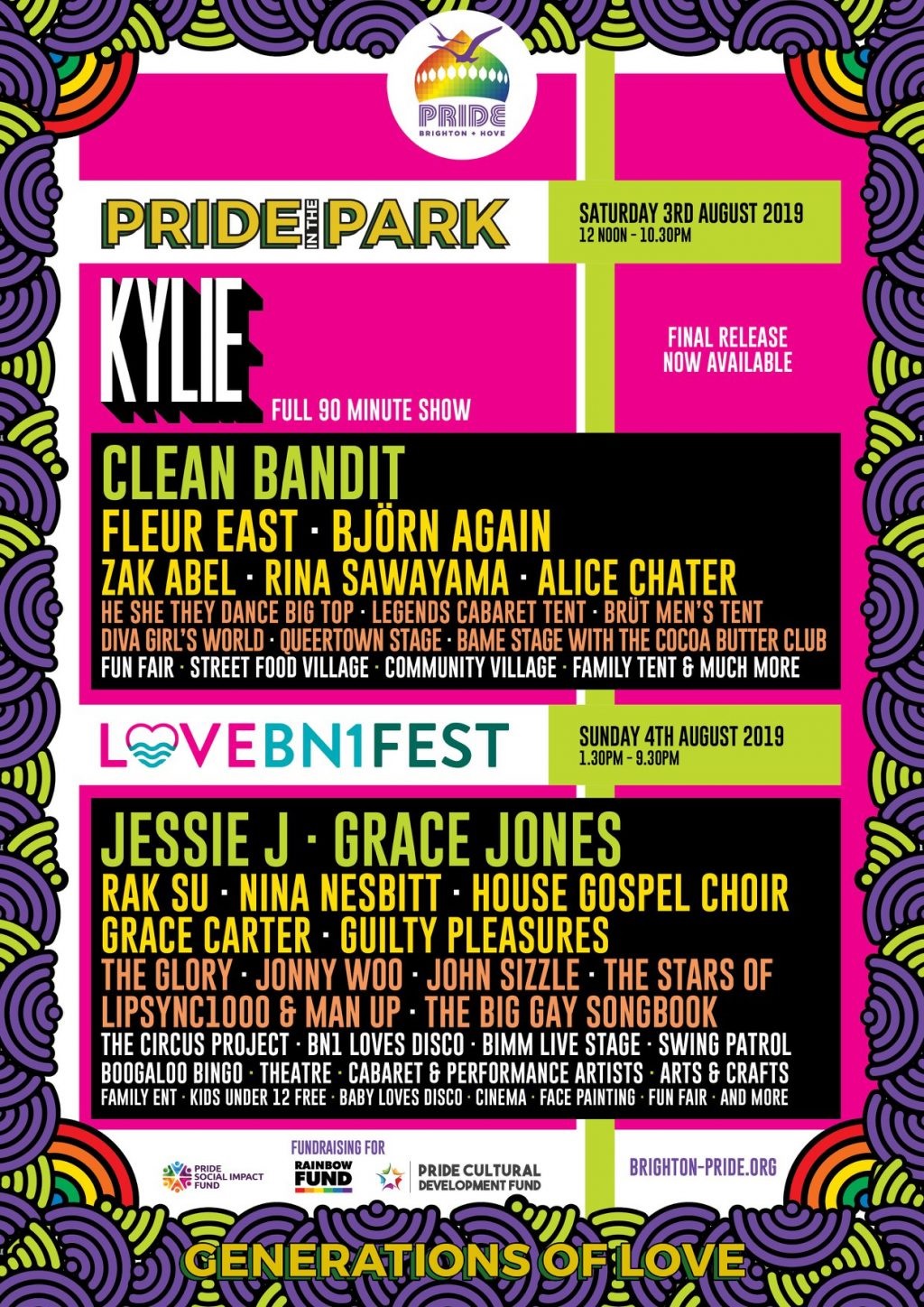