A student housing group wants to turn a guest house into a low-cost communal living space.

Seasalt Housing Co-operative has submitted a planning application to convert the Kelvin Guest House, in Madeira Place, Brighton, into co-living space, where the tenants control the property rather than a private landlord.

Its application is for a young people’s housing co-operative at the site close to the seafront.

Seasalt is the first student-led housing co-operative in the south of England. It took its inspiration from co-ops in Edinburgh, Birmingham and Sheffield.

The group has spent 18 months searching for a suitable property. A previous plan to take over a former care home fell through.

One of the group’s members, Sam Orenstein, a law student at Sussex University, said: “We are really trying to avoid looking at family houses as there is so much stress on those.

“I think the way families in Brighton already see students is hostile as there are a lot of students living in what were family houses.”

A neighbouring guest house owner has raised concerns about the potential noise from students living in the building.

However, Miss Orenstein said that as it would be a co-operative the people living there would have a longer-term commitment to the property rather than be transient.

At the moment it does not own the building but can still apply for planning permission.

The co-operative is working with Brighton and Hove Community Land Trust which would buy the freehold of the building, with Seasalt using it on a long-term lease.

Ownership by the land trust would enable it to be an affordable home in perpetuity.

Seasalt has been awarded £15,000 through the Reach Fund, a grant programme to charities and social enterprises to raise investment – and it has a £10,000 pledge from Sussex University.

It also has a grant of £40,266 from the Community Housing Fund run by Homes England – a government agency – to pay for its legal and planning fees. 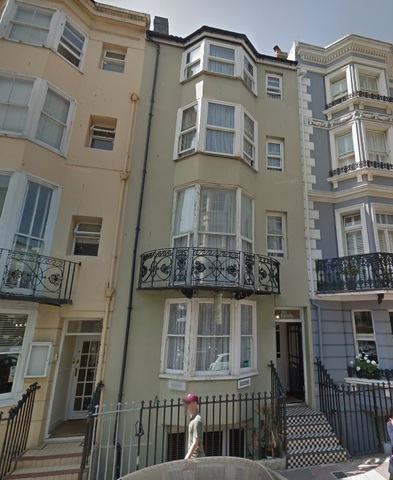 To support the change of use, Seasalt has submitted a letter from estate agent Graves Son and Pilcher saying that the company had marketed the guest house for six months and had 14 viewings without an offer.

The firm’s residential partner Andy Lees said: “I currently have four other guest houses on the books which in the current property market are all struggling to sell.

“I am aware of the concerns of many of the owners of the effect Airbnb, without legislation, is having on the business and the addition of recently built chain hotels within Brighton and Hove providing more bed spaces.”

Councillor Osborne said: “The current situation for students is not great and many end up at the mercy of the private rented sector, living in unaffordable, overcrowded and often poor-quality housing.

“An under-explored alternative is housing which is owned by the students themselves and I believe a student-led housing co-operative in Brighton such as Seasalt could be hugely successful.

“Not only would it improve the standard of housing for the inhabitants but also it could be key to a shift in student-resident relations in the city.”

There are currently 24 letters of support and four objections on Brighton and Hove City Council’s website.

A commenter whose details were redacted said: “Most young people, students, and early (and even mid) career workers are unable to afford decent housing.

“We need to find sustainable ways to address this worsening problem.

“I believe Seasalt Housing Co-operative is highlighting one promising way forward. They should be encouraged and nurtured in their endeavours.”

A guest house owner on the street was concerned about the potential loss of a business in an already struggling industry.

The owner said: “Every year thousands and thousands of people who are visiting the city are staying in these guest houses located in the street.

“We are already suffering to run the business. On top of this we do not want to lose customers, or get complaints from customers, because of the possible unsocial behaviours both during the day and night or people gathering outside of this property making our guests uncomfortable and feeling not safe.

“This street is certainly not to place for young people’s housing.”

The application can be viewed by visiting planningapps.brighton-hove.gov.uk and searching for BH2019/01940.