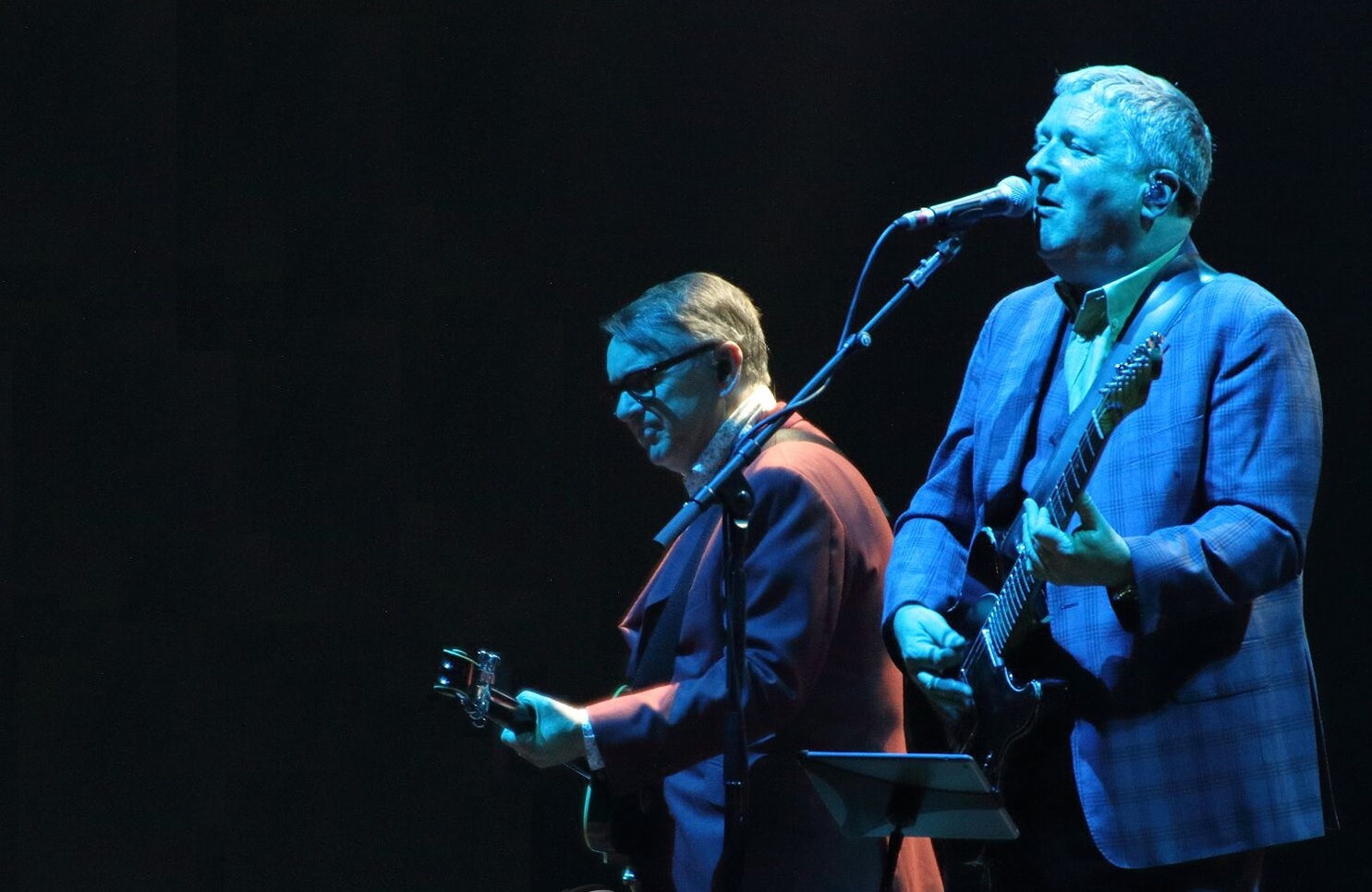 In 1973, Chris Difford, one of the two founding members of Squeeze stole 50p from his mother’s purse and placed an advertisement in a sweet shop window for a guitarist. That advert was answered by only one applicant, a teenage Glenn Tilbrook and thus, a legendary songwriting partnership was born that has lasted over forty five years and is still as strong as ever. Squeeze were formed a year later in 1974. Jools Holland was part of that original line up but quit the band 30 years ago for his own successful career.

Both men arrived at a near-capacity Brighton Centre this evening with their five strong band as part of their Squeeze – ‘The Difford and Tilbrook Songbook Tour’ , which offers fans a carefully curated showcase of songs from their illustrious music career. 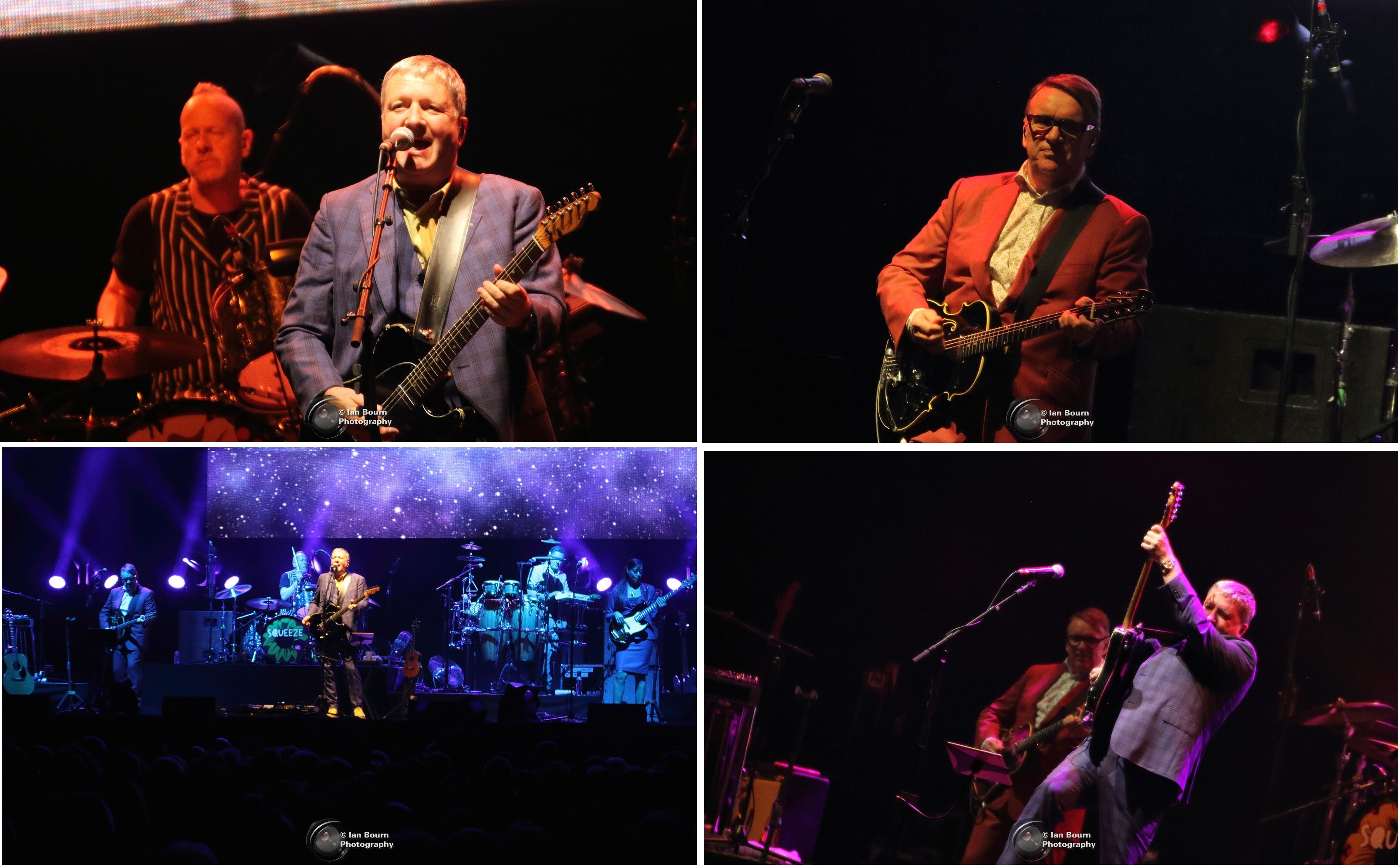 This was concert number eight of twenty-seven on the tour – and this tour is one with a difference, as not only is it a celebration of 45 years of music by Squeeze, but it’s aim is to raise awareness and much needed funds for the Trussell Trust network of food banks.

At all venues (including the Brighton Centre) there has been and will be multiple food drop points and collection boxes, where audiences have and can donate money or non-perishable food. The food donated at the venues will be collected and distributed to the nearest Trussell Trust food bank. Suffice to say that many items of food were generously donated and a collection in the foyer afterwards was well supported.

Just prior to the tour, Squeeze announced that there will be a special 7-track EP titled ‘The Magnificent Seven’ for sale at concerts with all proceeds going to the Trussell Trust. The performances were also being recorded each night and available to purchase after the show on a 2 CD set as a fabulous souvenir for fans. 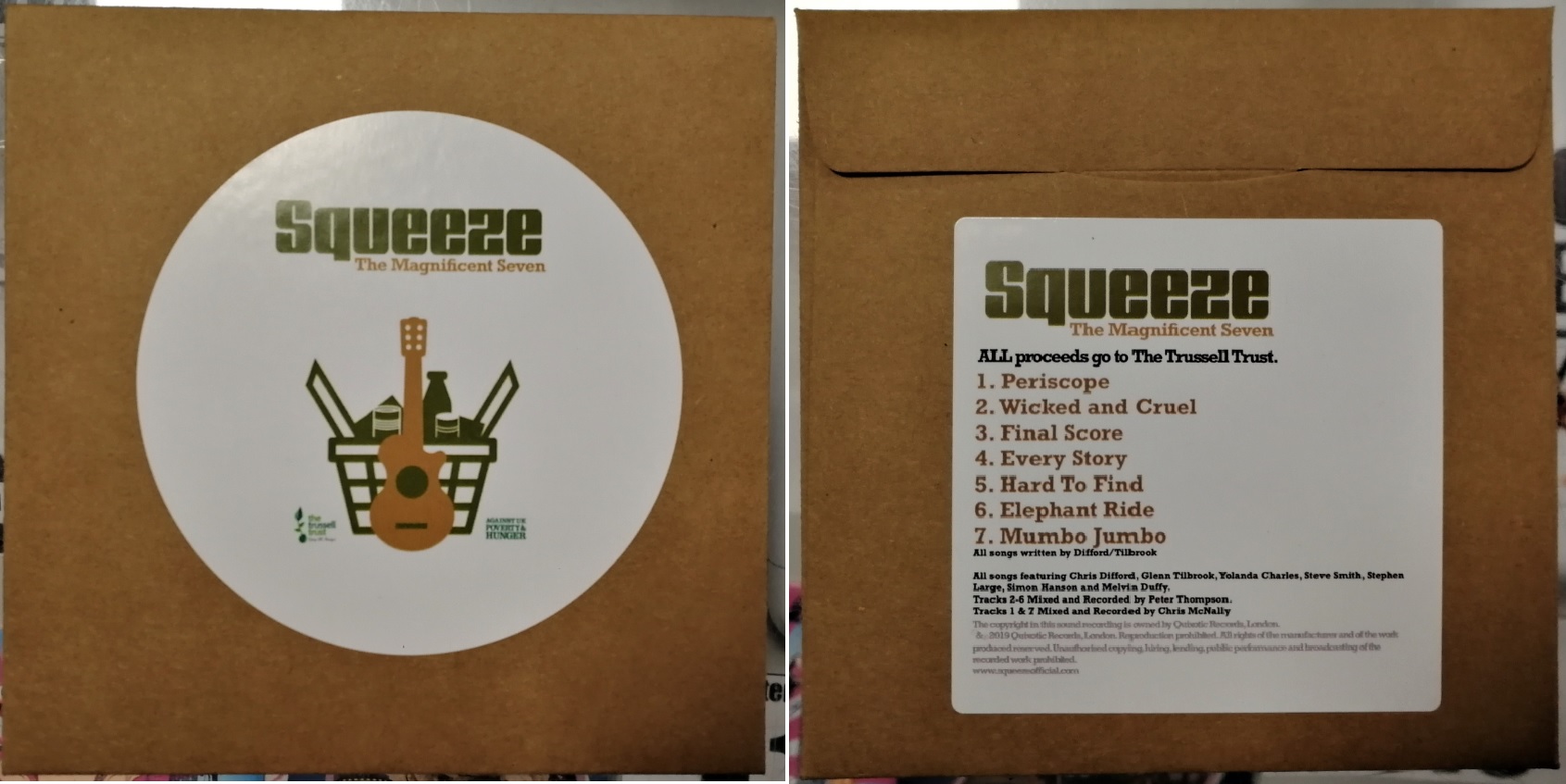 ‘The Magnificent Seven’ EP with all proceeds going to charity

It’s no wonder that the former New Wave band are riding high on the wave of a renaissance at present, having scored two critically acclaimed albums in the past four years, and headlined numerous UK festivals. In 2008 they won an Ivor Novello Award for ‘Outstanding Contribution to British Music’ , thus they are arguably an important and vital part of the quintessential British music scene. Tonight they showed exactly why with a stylish, polished performance and an outstanding show that did not miss a beat.

The backdrop to the set itself was a large screen showing a series of specially-made short films to go with each song which were all perfectly in keeping with the music without being distracting. The films featured nostalgic, evocative and arty scenes which had been well thought-out.

The set opened with sped-up footage of the band arriving at the venue earlier in the day, at which point they walked on stage and launched into opening number ‘Footprints’.

For the next hour and three quarters, the South London legends powered their way through no less less than 25 career spanning choice cuts from as far back as 1978 with ‘Take Me, I’m Yours’, right up to 2017 with ‘Please Be Upstanding’ (found on the latest ‘The Knowledge’ album).

As the set went on, you realise it’s easy to forget just how many successful singles Squeeze have had. ‘Pulling Mussels (From the Shell)’, ‘Up The Junction’, ‘Slap And Tickle’, ‘Labelled With Love’, ‘Cool For Cats’, ‘Tempted’ ‘Another Nail In My Heart’ and ‘Take Me, I’m Yours’ were all delivered with much aplomb, Glenn Tilbrook’s vocals still sounding as powerful as ever.

The fact that they were able to perform one of their most well-known songs ‘Up The Junction’ five songs into the set showed there was plenty of quality material to entertain us for the rest of the evening.

‘The Day I Get Home’ was a track I’d not heard before but I liked. It was set to road trip footage with all the tour locations being flashed up on the screen, a cheer rang out when it came to Brighton.

My personal favourites of the night were a stunning version of ‘Labelled With Love’ to which much of the audience joined in, ‘Cool For Cats’ (with Difford on vocals) which had almost the whole arena on their feet dancing, an energetic ‘Take Me I’m Yours’ as part of a two song encore was another stand-out as was ‘Tempted’, which although was never a chart success, is one of their most popular songs.

The closing number ‘Black Coffee In Bed’ featured an individual virtuoso performance from each member of the band which closed off off the show nicely. If young musicians want to know how to stay at the top of their game for so many years, I seriously recommend they catch one of the other dates on this tour. 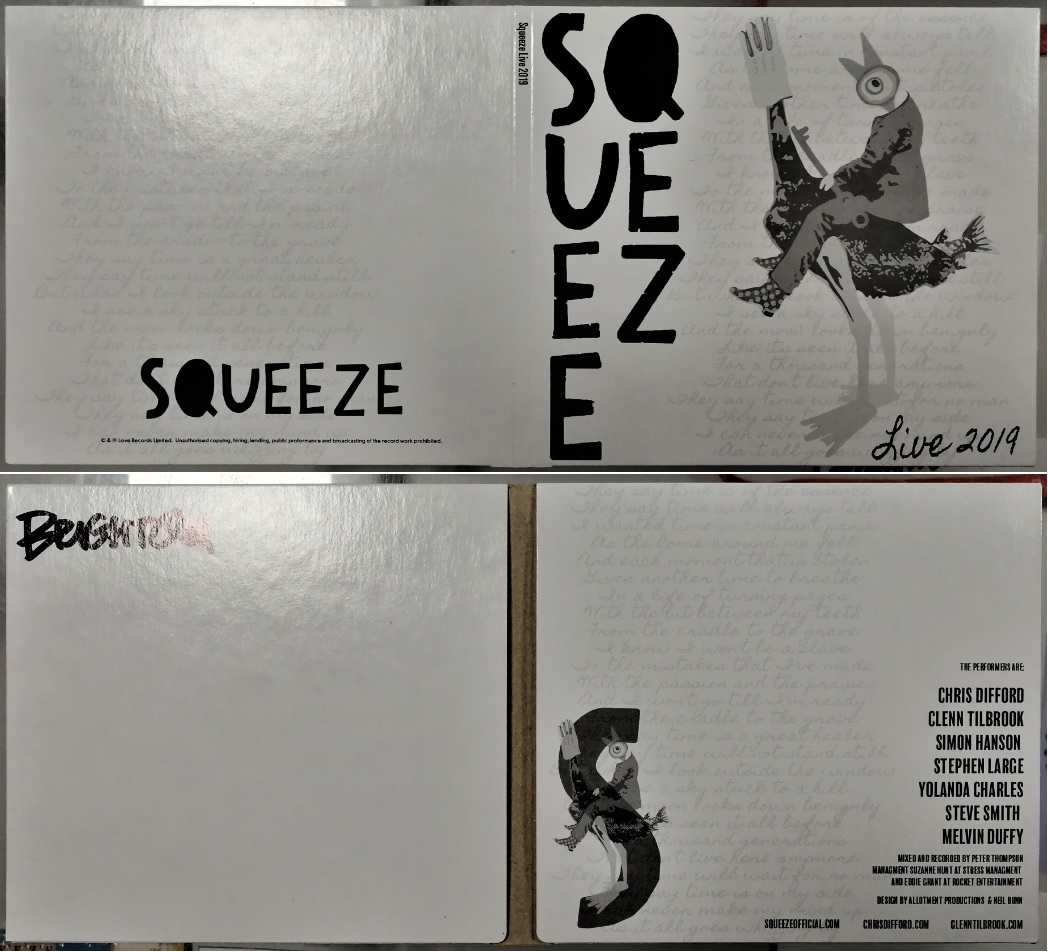 The live album of the concert 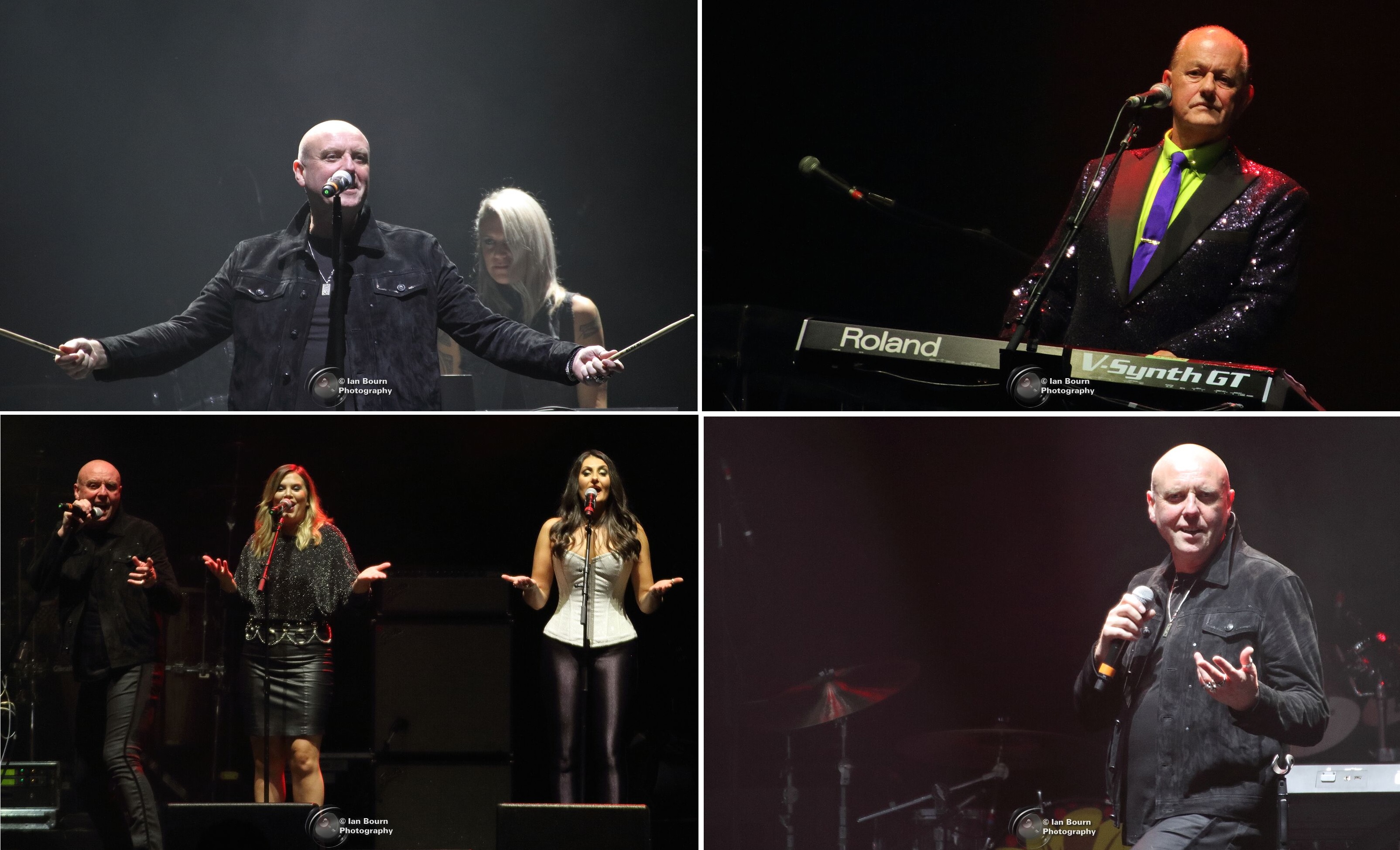 Special guest band for the whole tour are none other than 1980’s synthpop legends and Sheffield’s finest Heaven 17, who this evening comprised of founder members Glenn Gregory (vocals) and Martyn Ware (Roland synth etc), along with Berenice Scott (keyboards), and Brighton based Kelly Barnes and Rachel Meadows (both on vocals).

The quintet performed seven of their classic tunes as well as ‘You’ve Lost That Lovin’ Feelin’’ which Martyn Ware had covered back in 1979 with The Human League on their debut ‘Reproduction’ album.

The charismatic Heaven 17 frontman Glenn Gregory (whose 83 year old mother was apparently in attendance tonight) always knows how to get the crowd going and this evening he was no different from when I have previously had the pleasure of witnessing them live. From the very beginning he was encouraging the crowd to stand up and dance – and many duly obliged. It was all very different from the first time I saw them ‘live’, which was a very early ‘PA gig’ at the Pink Coconut nightclub which used to be located near the bottom of West Street in Brighton and it’s fair to say that all three original members (with the third being fellow former Human Leaguer Ian Craig Marsh) were certainly worse for wear during that distant three-song promo performance.

Tonight the eager crowd lapped up the hits as they were delivered in imitable H17 style, where the set was kicked off with a heavier updated version of ‘Crushed By The Wheels Of Industry’, and both Glenn and Martyn’s favourite H17 track ‘Let Me Go’ got an outing. Plus we enjoyed no less than a hat-trick of ‘Pavement’ (Side A) funky tunes, ‘Play To Win’ (with it’s ‘Funky Town’ beat), ‘Penthouse And Pavement’ (which saw hordes of fans dancing at the very front) and the delicious ‘(We Don’t Need This) Fascist Groove Thang’.

I strongly suspect that the majority of the crowd would have selected the final number, an extended funky version of ‘Temptation’ with powerful vocals by Kelly and Rachel, as the choice number of the set as everyone downstairs were up on their feet. To say that they went down well would be an understatement!

For further information on Squeeze, visit their official website – www.squeezeofficial.com

For further information on Heaven 17, visit their official website – www.heaven17.com 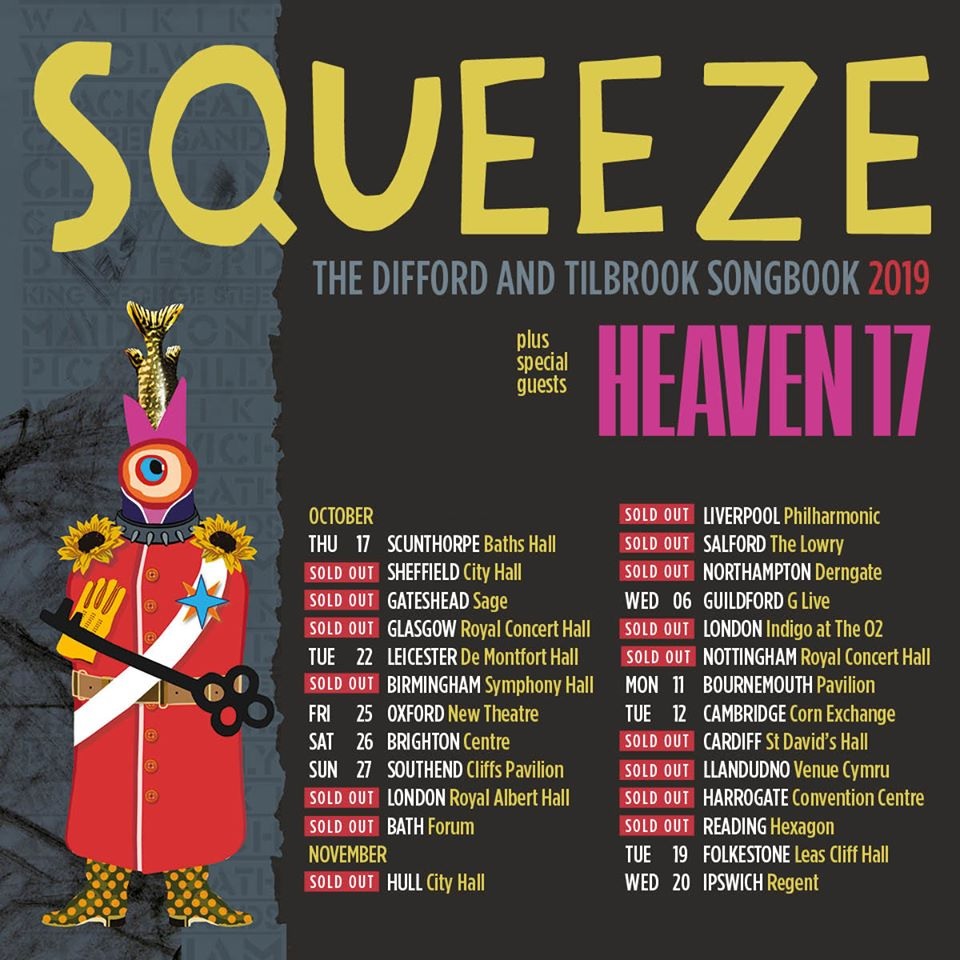 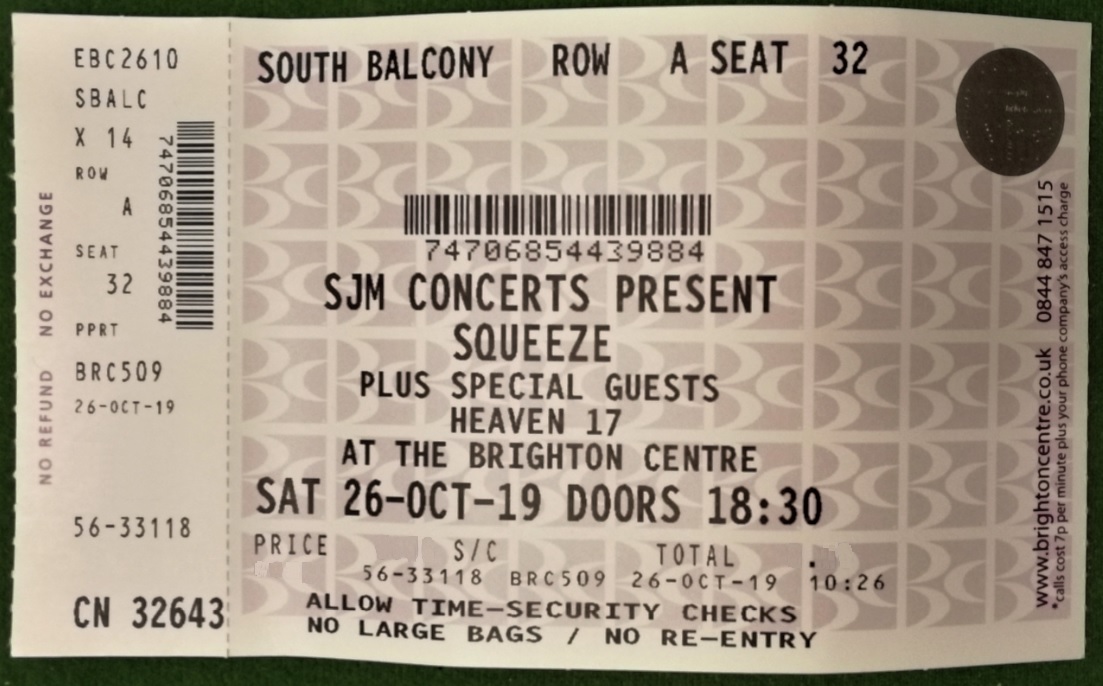 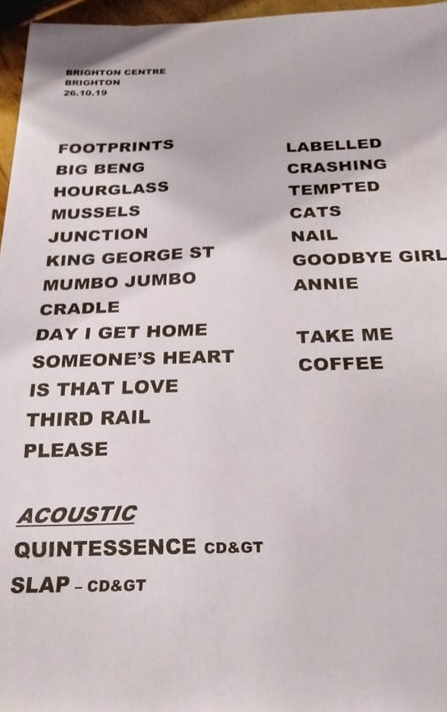