Students at a sixth form college in Hove grilled five candidates who are standing in the constituency in the general election next week.

The sixth formers asked about tuition fees, Brexit and government borrowing at the event hosted by Newman College in The Upper Drive, Hove, yesterday (Tuesday 3 December).

Miss Sabel said that she had had enough of party politics because the system seemed like a mess.

She wants to be a voice of reason, focusing on happiness economics to improve people’s wellbeing.

Miss Sabel said that she wanted reform of the House of Lords and for MPs to be elected by proportional representation.

She also called for university tuition fees to be abolished, adding: “It should be a case that going to university should be on merit.

“A lot of people feel forced to go. There are a lot of other options.”

She would like to see a system more like Germany to give people academic or vocational pathways.

Asked about Britain’s exit from the European Union (EU), she described herself as pro-European and said: “Brexit is a chance to say, let’s start again. Let’s reshape Britain. Let’s make a constitution we can all be part of. Let’s have more civic participation and all get involved.”

Candidates were asked if borrowing was a viable economic model. Miss Sabel said that both the Conservative and Labour borrowing models were not viable.

She said: “If you are just throwing money at a problem, issue or institution, that’s not good enough.

Conservative candidate Robert Nemeth said that education and its funding were on his mind as a father of three.

The environment was also a great concern as a father and beekeeper with millions of bees around the area.

He told students that his focus as a councillor was on homelessness, tourism, the economy and the seafront. 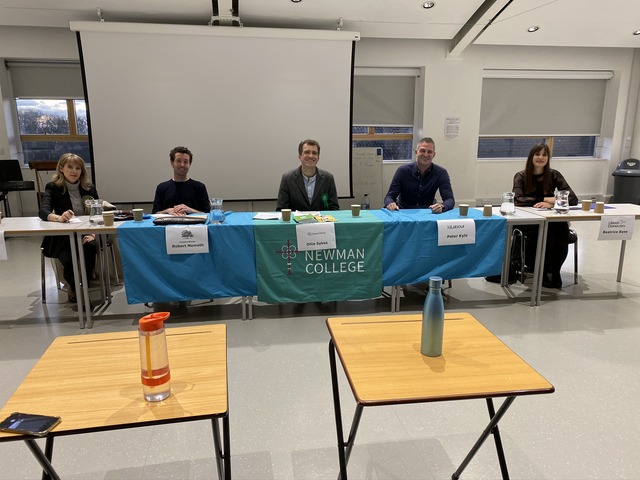 On tuition fees he said that, in a perfect world, there would be enough money for everyone to go to university. Fees were introduced in his second year at university and he did not have to pay.

He said: “If I’d had to pay them, I might not have gone to university in the first place. Maybe that’s a problem today when it comes to the choices of who goes and who doesn’t.”

Mr Nemeth was the only candidate to “talk up Brexit”. He said: “I think it’s a fantastic opportunity for all of us.

“More democracy, better laws, lower costs – we can vote where our taxes go and a much fairer immigration policy.

“Uncertainty is bad but I think the change is slow. I’m very positive.”

Mr Nemeth said that there was no more important subject than the economy when asked about public borrowing.

He said: “If the economy is not right then everything else suffers.

“As a Conservative and someone in business, I am naturally cautious. Borrowing got us into a financial mess in the first place.

“I’m calling on governments not to borrow as you will have to pay it back.”

Ollie Sykes told students that he was the Green candidate, not the lead singer of Bring Me The Horizon.

In 2015, he said, 75 per cent of votes were wasted. He said that the electoral system was broken because “first past the post” was not great for deciding who runs the country.

On student fees, he said that the Greens would end tuition fees, adding: “Further education is hugely underfunded as are secondary schools.”

In the past Mr Sykes taught in West Africa and said that his wife’s school in West Sussex was in a similar state to the ones in which he used to work.

The former councillor was concerned about the effect of Brexit on the NHS. He said: “We know the Conservatives made promises about investment.

“We also know our GDP (gross domestic product) is going to drop. They are planning for a ‘no deal’ Brexit in 2020. There is no end in sight for Brexit.”

He said: “The economic crisis of 2007-08 was caused by deregulation of the financial sector over a long period of time under both Labour and the Conservatives.

“No Brexit would be a huge boost to the economy. Funding of the Green New Deal has the support of the New Economics Foundation.”

Peter Kyle, who won Hove for Labour in 2015 and increased his majority two years ago, said that young people were the most well informed and he hoped that the audience would look at his voting record, adding: “I have always put our community first.”

He questioned why the people who need money the most got the least.

He said that university students were subsidised by £10,000 a year while further education received £4,300, apprentices about £1,800 and young people out of education or training about £800.

He said: “Why on earth are we not focused on the individual. Often the people who need it the most are getting the least.

“When tuition fees were introduced, it unlocked a huge amount of investment in universities.

“The present level is unconscionable and people have debts they cannot afford. I am standing on a manifesto to scrap that.”

On Brexit, Mr Kyle said that he was concerned about the effect on the two universities – Sussex and Brighton – as well as on tourism.

He said: “Fundamentally, the biggest thing that will be changing are your opportunities as young people going forward.

“The heavens are not going to crash in. The economy will probably not completely collapse within a year. The catastrophe is unlikely to happen as Britain is resilient.

“What worries me the most is in the last 30 to 40 years we have been exceptionally good at maximising our potential for the size we are. Brexit will limit that and your personal opportunities too.”

Mr Kyle said that the Conservatives were not a “borrowing-free zone”, adding that the Tories had increased government borrowing by 52 per cent since 2010 when the coalition with the Liberal Democrats took office.

“The challenge we have got is we need to be borrowing to invest while interest rates are low.”

Liberal Democrat Beatrice Bass told the audience that she was standing for the party most against Brexit.

She said that she was frustrated at complacency about protecting the environment.

Giving a voice to the creative industries in Parliament was also a passion. she said.

Miss Bass told the audience that her degree cost her £25,000. She cited the Scottish system where there were no tuition fees but limited spaces.

She said: “People who go are from privileged backgrounds. We want a system open to everyone no matter what background.

“We want to reintroduce the maintenance grants, especially for the poorest of students, and to review the finance.”

On Brexit, Miss Bass said that Sussex University research on the effect on the regional economy was “grim”.

Sussex and Hampshire would lose 20,000 jobs under the current Brexit deal and more than 30,000 jobs in the event of a hard Brexit.

She said: “The sectors hit are finance, communications and IT.

“These are high-skilled jobs and will have a knock on effect.”

The Liberal Democrats had the best costed manifesto, Miss Bass said, adding: “We will borrow responsibly – £100 billion – as interest rates are historically low and we should take the benefits from that.

“We should invest in jobs, the economy and regions.

“If we remain in the EU and stop Brexit we will save £50 billion.”

Polling stations across Brighton and Hove open from 7am on Thursday 12 December and close at 10pm.