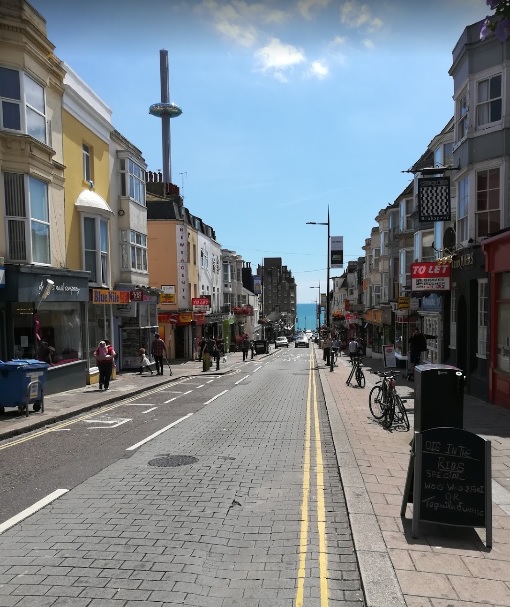 Preston Street in Brighton, home to several pubs and restaurants

All pubs and restaurants in Brighton and Hove are to close for at least a month from tomorrow under the latest sweeping measure announced by the Government to combat coronavirus.

The restrictions were expected to be implemented in London, which has more cases than anywhere else in the UK – but today, prime minister Boris Johnson announced they would apply across the UK.

At this afternoon’s daily press conference, Mr Johnson said the situation will be reviewed each month.

Meanwhile, the chancellor Rishi Sunak said the government will pay 80% of wages for employees who are not working, up to £2,500 a month.

Mr Johnson said: “These actions that we’re all taking together are helping to take the strain off our NHS bit by bit, day by day, your actions and your sacrifice are putting this country in a better position where we will be able to save literally thousands of lives.”

He continued: “We are telling – telling – cafes, pubs, bars and restaurants to close tonight as soon as they reasonably can and not to open tomorrow.

“Though to be clear, they can continue to provide take out services.

“We are also telling nightclubs, theatres, cinemas, gyms and leisure centres to close on the same timescale.

“I want to stress we will review the situation each month to see if we can relax some measures.”

He added: “some people may be tempted to go out tonight, and I say to them please don’t.

“You may feel invincible, but there is no guarantee you will get mild symptoms and you can still be a carrier of the disease and pass it on to others.”

Mr Sunak said the economic intervention he announced today is unprecendented in the history of the British state.

He said: “Employers will be able to contact HMRC for a grant covering most of the wages of people who are not working but who are furloughed or kept on payroll rather than being laid off.

“Goverment grants will cover 80% of the salary of retained workers up to a total of £2,500 a month and of course employers can top up salaries if they want to.”

It will be open initially for three months, and could be extended if necessary.