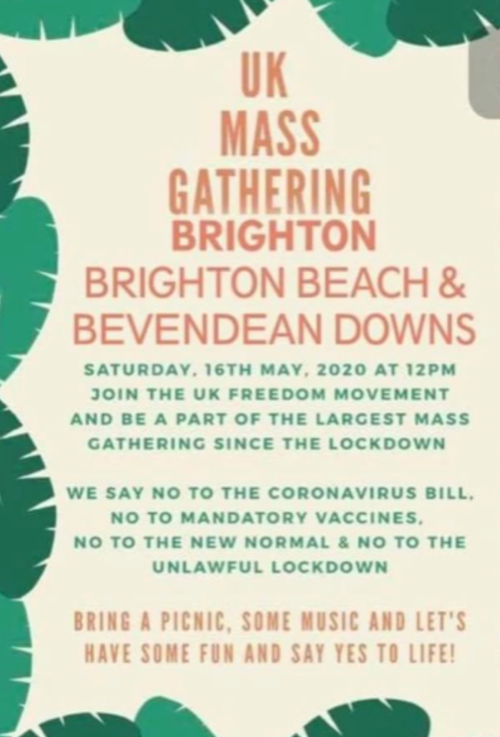 An organisation is reported to be planning mass gatherings in Brighton to protest about the coronavirus lockdown.

Flyers on social media in the name of the UK Freedom Movement have been advertising similar mass gatherings around the country.

And the Daily Mail has said this evening that a number of police forces are taking the prospect seriously and weighing up how to deal with it.

One flyer said that mass gatherings were planned for Brighton Beach and Bevendean Downs on Saturday 16 May at noon.

It said: “Join the UK Freedom Movement and be part of the largest mass gathering since the lockdown.

“We say not to the coronavirus bill, no to mandatory vaccines, no to the new normal and no to the unlawful lockdown.

“Bring a picnic, some music and let’s have some fun and say yes to life.”

The Mail said: “Members of the UK Freedom Movement are among a group of ‘anti-vaxxers’ who are opposed to child vaccinations.

“Parents in the UK are the most opposed to vaccines among major European countries – with the rate of more than three times higher than in Italy, France and Spain, according to a study released last month.”

A number of parents in Brighton and Hove have campaigned against vaccines such as the MMR (measles, mumps and rubella) triple jab and the city has some of the lowest childhood vaccination rates in the UK.