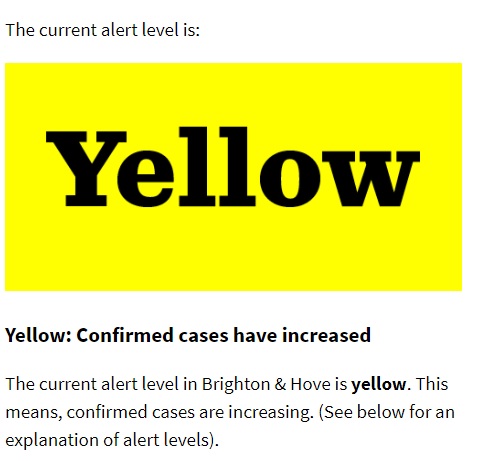 The city council this afternoon announced it was launching a four-colour alert system, with green the lowest level and red the highest.

The data is based on figures published on 14 September. More up to date figures are due to be published at 2pm.

The council says the increase has been greatest in people aged 16-24, and many have caught the virus when visiting friends’ houses and at parties.

The city’s director of public health, Alistair Hill, said: “I’m asking everyone to play their part and follow the guidance.

“To slow the virus we all need to step up physical distancing, wear face coverings where advised, limit contact between households and follow the ‘rule of six’.

“Businesses also have a vital role to play by ensuring they are helping their customers to stay safe.”

The current alert level can be found on this page of the council’s website.

It says the figures for the period up to 10 September are equivalent to a weekly rate of new cases of 20.3 per 100,000 residents.

Although cases are increasing, this is still lower than the rate for England, which was 32.4 per 100,000, during the same period.

The site also addresses difficulties in getting test results, saying: “The national Government has said that they are working hard to improve the situation.

“Until then, our advice is to keep trying to get tested if you have symptoms or have been asked to take a test.

“Keep trying on the NHS website or via 119. You do not need a test if you don’t have symptoms or have not been asked to take one.”

A yellow alert means confirmed cases are low, yellow that they are increasing, amber that they have reached a level of concern and red that the city could be subject to a local lockdown.