Pause, consult and get it right

Much has been said by both sides about the merits and deficiencies of the current “temporary” cycle lanes.

What is inarguable is that they were put up in a short space of time with minimal – if any – consultation. Certainly there was none with disability groups.

The A270 Old Shoreham Road cycle lane is probably the most controversial. Removing 50 per cent of the carriageway for a cycle lane each way is hugely unpopular with many local residents.

They are understandably worried about the additional congestion and thus pollution it causes and the ever increasing rat-runs through the residential areas of Hangleton, the Knoll Estate and Hallyburton Road.

Supporters have heralded a 61 per cent increase in usage by cyclists – a figure that will be called into question with an independent report shortly.

But even if we take this as true, that is 18 cyclists an hour each way and less than 2 per cent of the entire usage of the road in perfect cycling weather.

Prior to the pop up cycle lane, the A270 was a very good route that worked well for getting west to east and vice versa.

Cycling will be the answer for some but, for many others, journeys by car, taxi, motorbike, bus, lorry or van are necessary journeys that cannot be made by bike.

The plan of course with the next tranche of government money – tranche 2 – is to connect the Old Shoreham Road cycle lane in Hove to one in West Sussex.

But the West Sussex end – from the Holmbush roundabout to the Portslade border – is no longer being built.

So Brighton and Hove’s tranche 2 plan seems at best a folly and at worst a complete a waste of taxpayers’ money.

Indeed if the long-term plan is to have a car-free city centre why would you want to strangulate the two major arterial routes around the city – the A259 and A270.

The entire point of Brighton’s LCWIP (Local Cycle and Walking Infrastructure Plan) is to look at routes that encourage cycling and reduce car usage. 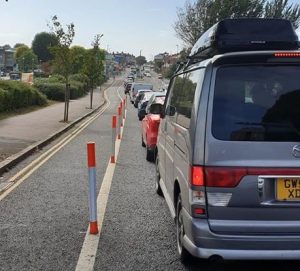 The Old Shoreham Road cycle lane is the right idea in totally the wrong place, now no longer connecting to anything and will never encourage cycling long term.

There are far more direct, flatter and more enjoyable routes to and from the centre of Brighton for cyclists which most of us already use.

I was encouraged to see the local Labour Party take a far more pragmatic approach to all the “temporary” covid measures.

This consultation must be more than just online. We need a proper paper consultation which can’t be shared as far afield as Sweden.

And it needs to be with the local residents of all the wards affected – as both sides of the discussion believe they hold the popular opinion that no one could be against their view.

We must not short-cut democracy and we must ensure that this knee-jerk and lazy planning is genuinely justified and not misplaced opportunism.

Rob Arbery is a moderator of the Remove A270 Cycle Lanes Group.