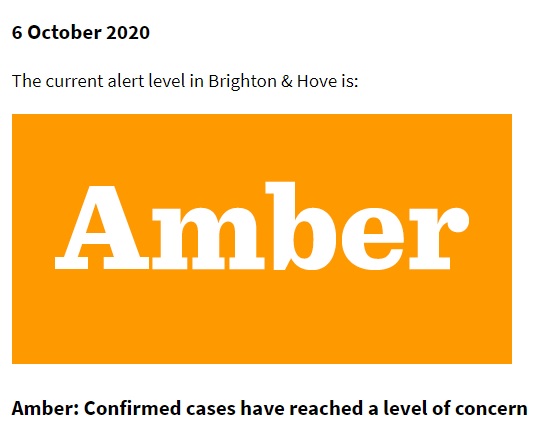 The city’s MPs have hit out again at “failures” in coronavirus testing as Brighton and Hove’s covid alert is raised to amber after cases tripled in a week.

Both Brighton Pavilion MP Caroline Lucas, Brighton Kemptown MP and Hove MP Peter Kyle said a lack of testing at the start of September meant the city’s rising cases had not been identified.

And they said they had raised the issue of the lack of testing as students returned in September and the government had not responded.

New figures released by the council showed the amount of testing fell by about 30% from the first week to the third week of September before rising again in the final ten days by about 60%. However, even this late rise doesn’t account for all of the latest 200% rise in positive cases.

Ms Lucas said: “The catalogue of test and trace failures has left Brighton and Hove with inadequate data to have any real sense of the COVID spread in our community, which could have serious consequences on our ability to contain and limit its spread.

“I recognise that resources are finite, but this situation was entirely predictable.

“In fact, I raised it in Parliament with the Health Secretary in September, asking how potential emerging hotspots could be identified if they weren’t priority areas for testing.

“I didn’t get a satisfactory reply and now here we are.

“The Government could and should have done more to ensure that we have a functioning test and trace system that could provide an accurate reflection of COVID spread in our communities.

“It’s been complacent, even negligent, in assuming that because the rise in cases here has not been as steep as other parts of the country, there wasn’t a problem in Brighton and Hove.

“We also need more transparency on the criteria for local lockdowns. If we are asking people to restrict their lives further, they need to know why those decisions are being made. It’s a basic issue of public trust, which has been sorely lacking in recent months.

“We’re now left in a position where residents in the city are at risk of restrictions if case numbers continue to climb. I’ve been calling for the local public health teams to lead our test and trace processes.

“Yet the Government seem determined to leave an over-centralised system in place, lining the pockets of private companies, rather than expand the existing public health frameworks.

“NHS test and trace should be an NHS service, in public hands. We need consistency, transparency and trust to keep us safe and at the moment, ministers are not delivering that.”

Mr Kyle said: “The government removed our drive-through covid testing centre precisely at the point we needed it most.

“I asked ministers how they were going to test arriving uni students, and they broke parliamentary rules by failing to answer. The result: infection doubles, we move to amber alert.

“Testing in Brighton and Hove fell throughout September, plummeting towards the end. We now know that infection rates we rising at this exact same time.

“Once again government knew the risk and likelihood of this because people like me were telling them.

“Infection rates have doubled in our city but still remain half the average for England. Government incompetence has landed our city in this mess and it falls to us as citizens to get us out of it.

“Good policy making in Whitehall would have avoided this.

“I’m sorry the burden falls on you and me, but right now responsible behaviour is our best way out.”

Mr Russell-Moyle said: “The Prime Minister wants to blame everyone but himself for the rising cases. He was warned about the potential for a second wave and simply hasn’t adequately prepared for it.

“I was pleased to see an added testing centre in East Brighton but that wasn’t accompanied by increased testing capacity. The Government must do better.”