A man with links to Brighton and Hove is being hunted by police over damage to cars and a house in Shoreham. 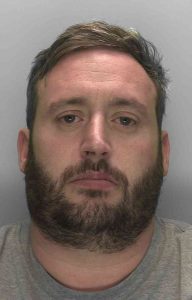 Sussex Police said today (Monday 2 November): “Police in West Sussex want to interview Glenn Waters, 34, over threats and damage caused to a house and cars in a Shoreham street.

“On the afternoon of Friday 16 October in Shirley Close, Shoreham, a man was reported to have verbally threatened occupants of an address, then used a hammer to damage a front window – and window glass and panels on two vans parked outside.

“Waters is described as white, 6ft 2in, of heavy build, with short brown hair, a beard and brown eyes.

“He is known to frequent Brighton and the Shoreham, Southwick and Pulborough areas of West Sussex.”

Waters, of Prince Charles Close, Southwick, is due to go on trial at Brighton Magistrates’ Court next – on Thursday 12 November – charged with attacking another man in St Catherine’s Terrace, Hove, causing him actual bodily harm (ABH).

Magistrates remanded him on unconditional bail on Thursday 13 August.

Detective Constable Hugh Charles, of the West Sussex Safeguarding Investigations Unit, said: “If you have seen Glenn Waters since Friday 16 October or know where he is, do not approach him but contact us on 101, or 999 if he is present, quoting serial 573 of 16/10.