The coronavirus rate in Brighton and Hove is among the very lowest in the country, according to figures published by Public Health England today (Wednesday 25 November). 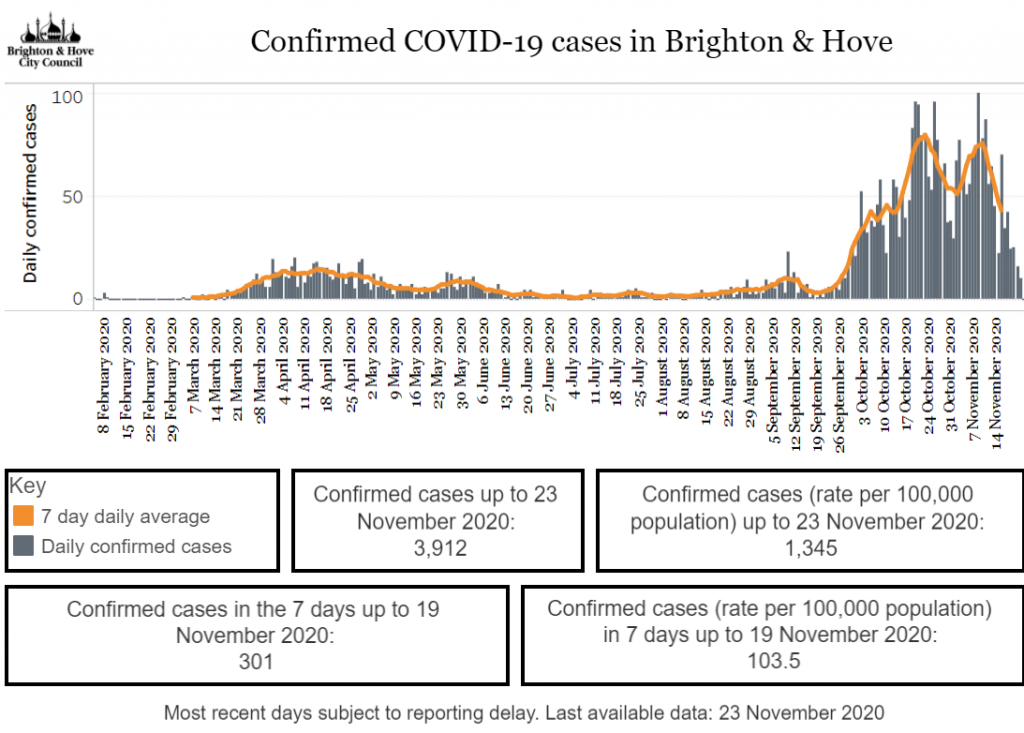 Only 25 out of 315 councils had a lower rate of confirmed cases for every 100,000 people, including neighbouring Adur, which includes Southwick and Shoreham.

And since the weekend the rate of new cases appears to have dropped further, although Public Health England cautioned that the figures for the past four days may be incomplete.

Today, the number of people reported to have tested positive for the coronavirus in Brighton and Hove in the past 24 hours was 29, with 209 cases in the previous seven days.

About 1,000 tests a day are taking place in Brighton and Hove. In addition, many NHS medical staff are also now taking informal tests at least once a week to check themselves and see whether a formal test is advisable.

The total in Brighton and Hove since the start of the pandemic now stands at 3,941.

And in the past 24 hours the number of deaths reported in Brighton and Hove within 28 days of a positive coronavirus test was two.

In the most recent seven-day period the total was three, down from seven the week before. The total in Brighton and Hove since the start of the pandemic is 126, although 178 death certificates mention covid-19.

The most recent weekly record of all deaths in Brighton and Hove that occurred up to Friday 13 November but which were registered up to Saturday 21 November lists 52 deaths. None of them were from covid-19.

Nationally, today, the UK recorded 696 deaths of people with a positive coronavirus test result in the previous 28 days, the highest figure since early May, taking the national toll to 56,533.

But almost every area in the country recorded a drop in the number of new covid cases in the week to Saturday 21 November, with just a few dozen exceptions.

The highest figures were recorded in Swale and Thanet, both, in Kent, with Swale recording 803 new cases, or a rate of 535.

The lowest figures were recorded in South Hams, which includes the Devon town of Totnes, with 49 new cases, or a rate of 56.3.