A milestone has been reached by the sculptor working on a statue of the Brighton woman who became the first suffragette to die for the cause of women’s right to vote. 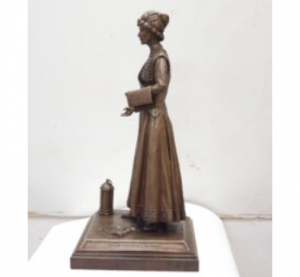 Denise Dutton has completed and delivered a bronze maquette of Mary Clarke, presenting it to Brighton and Hove mayor Alan Robins.

Councillor Robins received the maquette, or scale model, on behalf of the Mary Clarke Statue Appeal – and the people of Brighton and Hove – at a “socially distanced ceremony” at Brighton Town Hall.

The ceremony marked the start of a fundraising drive by the Mary Clarke Statue Appeal to raise £5,000 by the end of this month towards the £60,000 cost of the statue.

The maquette depicts Mary Clarke on her release from prison a few days before she died on Christmas Day 1910 at the age of 48.

The appeal said: “She wears a suffragette sash and on her left arm carries a last few copies of Votes for Women, the suffragette newspaper she regularly sold in Brighton.

“The front page of the November 1910 issue depicts the events of ‘Black Friday’ when, a few days before, she was arrested and imprisoned. She and hundreds of other women were assaulted by police.

“Mary wears the Hunger Strikers’ medal and walks with gentle dignity over the implements used in forcible feeding, which are imbedded in the surface of the plinth.

“Her clothing, accurate for the period, subtly references her background as an artist, her love of flowers and her time in prison.

“She gestures towards a lamp at her feet which she has placed there for others to pick up.

“This refers to the words of Isabella McKeown, spoken after Mary’s death: ‘Her they must not mourn in silence. They must take the torch from her and light the darkness.’

“Mary’s hand is positioned low so that children can hold it. 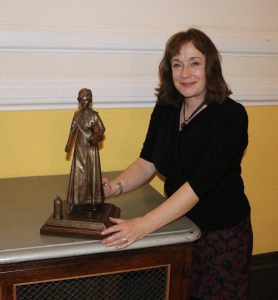 Denise Dutton with the maquette

“A low plinth carries the above quotation from Isabella McKeown and others from Emmeline Pethick-Lawrence and Mary’s sister Emmeline Pankhurst – as well as Mary’s own courageous words: ‘I am glad to pay the price for freedom.’

“Emmeline Pethick-Lawrence’s statement about Mary as the ‘first woman martyr who has gone to death for this cause’ provides another iconic quotation on the sides of the low plinth, while Emmeline Pankhurst’s moving words – ‘She is the first to die. How many must follow?’ – are etched into its surface, curving around the line of the feeding tube embedded in the bronze.” 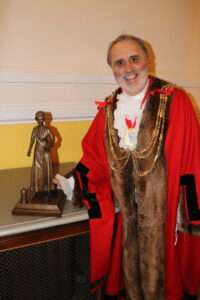