Just over one in three children from the poorest parts of Brighton left school with a good pass in GCSE maths and English, a campaigner told councillors today (Thursday 28 January).

Sussex University research fellow Carlie Goldsmith said that just 37 per cent of those pupils achieved the equivalent of A to C grades – or grades 9 to 4 – in English and maths.

This compared with the 69 per cent average for Brighton and Hove as a whole – a 32-point achievement gap.

And young people from Whitehawk, Manor Farm and the Bristol Estate were twice as likely to be excluded from school than pupils from elsewhere in Brighton and Hove.

Dr Goldsmith, who grew up in Whitehawk, urged Brighton and Hove City Council to draw up a plan to tackle the disadvantages faced by those children.

She also told a virtual meeting of the full council that independent campaign group Class Divide wanted children from East Brighton to have the chance to attend schools elsewhere in the city.

She led a deputation from Class Divide to the council and said that the only option for children in East Brighton was a school where just seven out of 65 pupils from deprived backgrounds passed their English and maths GCSEs with good grades.

“Is that a choice you would accept for your own children and grandchildren?” she asked.

“We say that the levels of education inequality in this city are a disgrace and should be a priority for all of you, no matter where you sit on the political spectrum.”

Green councillor Hannah Clare, who chairs the council’s Children, Young People and Skills Committee, said: “I want the council to work with you on our plans to address the problem you have highlighted.”

The council publishes an annual education and standards report but hasn’t focused on communities before although Councillor Clare is understood to be keen to address this in future reports.

Dr Goldsmith, who stood for the Greens in the East Brighton by-election in October 2012, said that young people from Whitehawk, Manor Farm and the Bristol Estate had been ranked in the 1 per cent least advantaged for education, skills and training in England for at least the past 15 years.

She cited the “index of multiple deprivation” which breaks England down into almost 33,000 “lower-layer super output areas” (LSOAs).

The least disadvantaged area of Brighton and Hove was ranked 32,690th out of the 32,844 LSOAs. 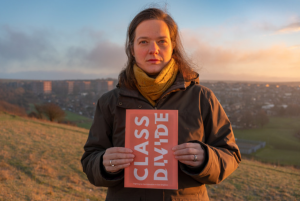 Dr Goldsmith told councillors that when people heard that she had grown up in Brighton, they said, “how lucky.”

But for those who lived in the deprived areas of Brighton and Hove, she said, it was not the fair and inclusive place that people saw from the outside.

She said: “It always amazes me that the hardships people face there are largely unknown by those who live elsewhere.

“People who think of themselves as politically progressive are often completely ignorant of the scale of the inequalities that exist right here on their doorsteps.

“And nowhere is this divide so damaging than in education. I was lucky. I got an education by accident.

“But luck shouldn’t determine your life chances – and the rest of my family had experiences that were much more common among our neighbours and the wider community.

“Currently, as things stand the chances of my nephews getting basic grades are slim at best.”

Class Divide had five requests to narrow the attainment gap