A terrace of four hidden homes in Hollingdean has been granted planning permission.

Brighton developer Boxleaf submitted plans to demolish an existing five-bedroom chalet-style bungalow and double garage tucked away on the hill between homes in Hollingbury Road and Hollingdean Terrace, near Fiveways.

In their place, Boxleaf, which is based in Gloucester Passage, Brighton, plans to build four terraced homes with four bedrooms each.

The company, run by 36-year-old Reinhardt Slabbert, submitted plans for split-level homes to take into account the sloping site.

A number of neighbours sent objections to Brighton and Hove City Council along with former Labour councillor Tracey Hill, who represented Hollingdean and Stanmer ward until recently.

She said: “The space might well take some further development but seems inadequate for four houses with four bedrooms each.

At a virtual meeting of the Planning Committee this afternoon (Wednesday 7 April) Labour councillor Theresa Fowler, who also represents Hollingdean and Stanmer, said: “Four homes is too much.”

She was concerned about the loss of some of the trees on the site and the dangers of cars coming and going in and out of a narrow passageway.

But Boxleaf shareholder Nicholas Strickland, 48, told councillors that the scheme was comparable with others like it around Brighton.

And given the need for the scheme to be financially viable, it was essential for the new homes to have four bedrooms.

He added: “We have sought to retain and preserve existing trees.” 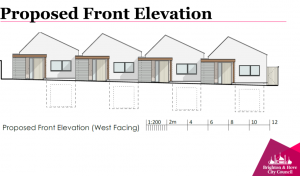 The plans included two parking places for cars and at least eight for bikes in a “communal cycle parking store”.

Independent councillor Tony Janio said: “I just don’t see it working. It’s going to be a resident’s nightmare. This is going to cause chaos.”

Other councillors expressed reservations including Labour councillor Nick Childs who said: “We need to build more homes. While it might not be perfect, it’s something that on balance I can support.”

He had seen comparable schemes – and they tended to work, he said. And the Boxleaf scheme was “very cleverly laid out” to make the best of the site.

The committee voted seven to two in favour of the plans which are expected to generate a community infrastructure levy of about £36,000 for the council.