Pensioner suffers broken hand after youths kick him off bike 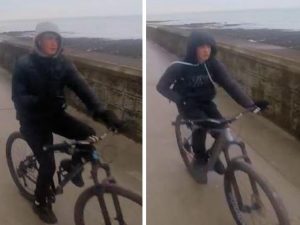 A 72-year-old man suffered a broken hand after two youths kicked him off his bike on the Undercliff at Saltdean.

Sussex Police published a picture of two suspects – also cyclists – and issued a public appeal for help identifying them.

The force said this afternoon (Tuesday 13 April) that it had managed to identify the two youths – and that inquiries were continuing.

Sussex Police said: “Two youths sought in connection with an assault on a 72-year-old cyclist have been identified.

“It follows the incident which is reported to have occurred along the undercliff at Saltdean on Thursday 25 February.

“The victim was kicked off his bike, causing him to suffer a broken hand.

“The two youths previously pictured in our appeal have since been identified and police inquiries are ongoing.

“Thanks to anyone who came forward with information.”

Earlier police said that one of the youths was riding a dark-coloured mountain bike and wearing a grey top with the hood up, a black coat, gloves, trousers and trainers.

The other youth was riding a silver mountain bike and wearing a grey top with white drawstrings, also with the hood up, black gloves and dark-coloured trousers and trainers.

The force said: “Police would like to speak to the two people pictured or anyone else who may have information.