Teachers to strike at Brighton school over academy decision

Teachers and support staff plan to go on strike at a Brighton school next week after the government pushed ahead with plans to turn it into an academy.

The industrial action follows the decision to appoint the Pioneer Academy as the school’s sponsor.

The walk-out has been called by three unions – the National Education Union (NEU), the GMB and Unison.

They said: “Local MPs, councillors and parents/carers from the Hands Off Moulsecoomb Primary campaign have condemned the imposition of the Pioneer Academy and the refusal to respect the wishes of the local community.

“They are committed to continuing the campaign during the ‘due diligence’ period that now follows, and to pressurising the Pioneer Academy to withdraw to allow Moulsecoomb Primary to continue improving as part of the Brighton and Hove family of schools.

“The Department for Education (DfE) is presenting it as a ‘done deal’ but campaigners are determined that local democracy will prevail.

“Staff have taken the decision to strike with a heavy heart because they know this will place pressure on families and because it disrupts the education of children.

“But unions have committed to working with community groups to support families with the provision of free meals and activities to minimise the impact where there are childcare needs.

“The Pioneer Academy has the power to prevent strike action as it would be called off immediately in the event of the sponsorship being withdrawn.

“In 2019, the previous sponsor, the New Horizons Trust, withdrew after sustained pressure from parents and the community. Unions are calling on the Pioneer Academy to step away.

“Lee Mason-Ellis, the chief executive officer of the Pioneer Academy, distributed a letter to parents soon after the sponsorship was announced, attempting to rebut points made by unions and campaigners.

“This was given short shrift by parents. It has made campaigners more determined to protect the school’s current position within the local authority. 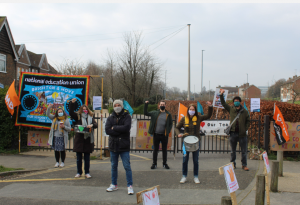 “Mason-Ellis refuted that the trust would be ‘making money’ out of Moulsecoomb Primary but neglected to mention details of his own salary and those of other senior staff.

“Unions have discovered that he pays himself £145,000 to £150,000 annually to run 11 schools, significantly more than the director of children’s services in Brighton and Hove, which runs over five times as many schools.

“As community and academy schools receive the same amount of funding, bloated senior staff pay reduces resources devoted to children in the classroom.

“Given that the Pioneer Trust has never taken a school from ‘inadequate’ to ‘good’, parents see his promises of additional investment and progress as rather hollow.

“(They) are not prepared to place at risk the real improvements the school has made with Brighton and Hove, confirmed by Ofsted monitoring visits, since the school was judged ‘inadequate’. 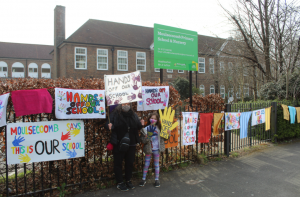 “Unions also point to the ‘sleaze’ of one of the Ofsted inspectors who was part of the team that declared the school as ‘inadequate’ working for the Pioneer Academy.

“Despite repeated requests, the DfE, regional schools commissioner and the Pioneer Academy have not provided a satisfactory explanation for this clear conflict of interests.

“On the strike days, the school will be decked out with home-made banners and ‘protest pillowcases’ as local parents, other Brighton and Hove schools and community organisations show their support for a staff strike.

“The vibrant colours and messages will make it very clear that the community supports their call for the school to stay within the Brighton and Hove family.

“Union officers are making sure that rules on covid-safety are applied and that the numbers on picket lines are limited and distanced.

“Supporters from the community will be welcome to visit the picket lines that will be in place from 8am to 10am on both days but asked to stay within household/support bubbles, maintain social distance and wear a mask.” 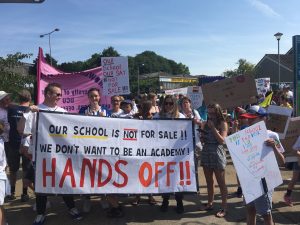 Moulsecoomb Primary School was inspected by the official watchdog Ofsted in April 2019 and rated “inadequate” in a report which was published in May 2019.

The government then imposed an academy order, in June 2019, to force the school to join a multi-academy trust.

Since then, campaigners have fought to have the academy order revoked. They held a March for Moulsecoomb in July 2019. And they have argued that the school has improved significantly since its inspection and should no longer be eligible for government intervention.

In addition, Brighton and Hove City Council organised a ballot of parents and carers in which 96 per cent voted against the school becoming an academy.