Glenn Murray who Albion signed from Rochdale for just £300,000 in 2008 and who scored over 100 goals for the Seagulls has retired from the professional game after a stint at Nottingham Forest. 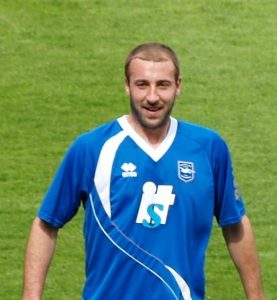 By manilaseagull, via Wikimedia Commons

The striker, born in Maryport, scored on his Seagulls debut against Crewe Alexandra at Withdean in February 2008.

He went on to score a further 102 goals for the Albion.

Murray now has a home in salubrious Withdean, a few hundred yards from the stadium where he made his name.

In all, Murray netted 202 professional goals from League 2 and every division to the Premier League, from Carlisle, Stockport, Rochdale, Crystal Palace, Reading, Bournemouth and three stints at the Albion – the last of which ran from 2016 to 2021 and included a four-month initial loan.

He also had a stint on loan at Watford, the only club he didn’t score for, before joining Forest in January 2021 and scoring twice for them.

He made 560 league appearances in all.

His final Albion goal was in February last year in a 3-3 draw at West Ham.