A police officer was knocked unconscious by a glass bottle thrown by someone in the crowd on Hove Lawns last night (Saturday 5 June).

Four people were arrested as police tried to disperse a crowd made up mostly of young people opposite the bottom of Grand Avenue.

And detectives issued an appeal for witnesses after the officer was taken to the Royal Sussex County Hospital, in Brighton, for treatment.

“During this, a glass bottle was thrown towards them. The female officer was taken to hospital for treatment and is now thankfully recovering at home.

“Footage from the officer’s body camera captures the moment before the glass bottle hits her.”

Detective Sergeant Chris Lane, of Brighton and Hove Criminal Investigations Department, said: “A member of the crowd threw a glass bottle at officers, which hit one directly in the face and knocked her unconscious.

“As she fell to the floor, her head also hit the police car and she was unconscious and injured in what was clearly a very dangerous situation.

“Thankfully her injuries are not believed to be serious and she is now resting at home after being discharged from hospital.

“The officer’s body camera footage shows that the bottle was thrown from a considerable distance away and it could have seriously injured any one of a number of police officers or the person they were arresting.

“To indiscriminately throw a bottle into a group of police officers is deplorable and could have caused serious injury.

“The individual that threw the bottle has not been apprehended and we are appealing for the help of the public.”

One member of the public was also taken to hospital following the incident and four arrests were made. 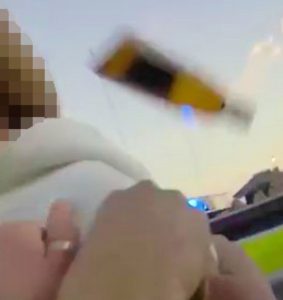 Detective Sergeant Lane added: “We are aware of a number of videos circulating on social media, including one which appears to show an officer detaining a young woman who had reportedly just damaged a police car.

“This sort of behaviour is completely unacceptable and will not be tolerated.

“Our officers attempted to engage with the group in response to concerns of disruption and disorder but a small number of individuals became obstructive and refused to co-operate.

“At this point, we had to respond to prevent the situation from getting out of hand and ultimately to keep everyone safe.

“There were a large number of people present who were filming on mobile phones and we would ask that they provide this footage to police to assist with the investigation.

“Even if the footage does not show the individual in the act of throwing the bottle, it may still assist the investigation.

“The investigation into this matter will be unwavering and we will scrutinise every second of footage from the many officers and public present to identify the individual concerned and to identify any further offences committed.

“If you are that person, we would urge you to step up now, contact police and take responsibility for your actions.

A 16-year-old girl from Brighton was arrested on suspicion of criminal damage.

A 53-year-old man from Hove was arrested on suspicion of affray.

A 26-year-old man from Hove was arrested on suspicion of assault of an emergency worker.

A 15-year-old boy from Brighton was arrested on suspicion of obstructing police, affray and failing to comply with a “section 35 order” excluding a person from an area.

All four suspects remain in custody at this time.