A set of huts selling food and drink on Hove seafront can stay for the time being. 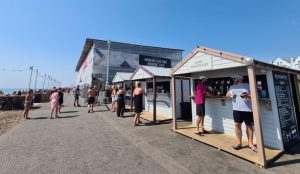 Councillors granted temporary planning permission for six months for the pop-up venue on the promenade next to Rockwater – previously the View, Venue, Babylon Lounge and the West End Café.

The kiosks, in the style of large beach huts, were put up during the coronavirus pandemic and while construction work was carried out on the main building.

Independent councillor Tony Janio asked why there was no previous planning application for the huts at a meeting of Brighton and Hove City Council’s Planning Committee today (Wednesday 9 June).

He was concerned that companies which had put up temporary structures because of covid-19 would have to submit a wave of planning applications.

Green councillor Sue Shanks was concerned about the increased footfall and the lack of a lift in the new building.

She said: “I thought the assumption was when they finished the development, they would remove these.

“They still haven’t quite finished. Is there a way of linking this permission to enforcing what we already agreed, that they should have a lift?”

Rockater has said that structural issues have made the original plans for a lift to the roof terrace of the main building unviable. Investigations are under way to find another way to provide a lift.

Council planning manager Nicola Hurley said that the council was speaking with Rockwater about completing the scheme but the applications are separate matters.

Conservative councillor Carol Theobald said that the huts had been useful and welcomed them for a further six months.

She said: “During the lockdown it’s been brilliant to go and have a coffee there. The only thing is sometimes there are crowds waiting for their refreshment and it can restrict the pedestrian way a bit. Perhaps that should be controlled a bit more.”

Labour councillor Nick Childs said: “The changes made to this building and these beach huts have really added value to the area.

“I think they’ve brought prosperity and they’ve really improved it in terms of amenity and bringing people to that part of the seafront in Hove.”

Independent councillor Bridget Fishleigh asked for a condition to ensure that a queuing system was set up for customers which the committee backed.

Rockwater’s agent, Luke Carter, director of Lewis and Co Planning, said: “We are delighted to have secured further temporary consent for these beach hut kiosks that have proved a hugely popular addition to Hove esplanade.

“The whole team at Rockwater is looking forward to their first summer with the Shacks by the Shore, restaurant, bar, roof terrace and beach deck all fully operational.”

In January, the Planning Committee went against official advice and granted planning permission for a glazed roof extension on the building.

The kiosks also have a permanent alcohol licence.