A derelict site in the centre of Brighton could be transformed into a four-storey office block.

The site – on the corner of Church Street and Portland Street – has been empty for 25 years.

The developer, SM Brighton, applied to Brighton and Hove City Council for planning permission to build the offices which, it said, could provide up to 350 jobs.

Councillors are due to decide whether to grant permission next week at a meeting of the council’s Planning Committee.

A report to the committee backed the proposal although some neighbours, a community group and Green councillor Lizzie Deane, who represents St Peter’s and North Laine ward, have all objected.

The North Laine Community Association said that the plans were overbearing, unsuitable and inappropriate.

They include a building with 3,560 square metres of office floorspace. The ground floor would include a reception area, with showers and changing rooms for staff, an exhibition space and open-plan offices.

The scheme would provide two off-site disabled parking spaces, in Spring Gardens, and 46 cycle parking spaces as well as a landscaped area beside the building.

And if the scheme is approved, the developer would be expected to widen and repave the footpath along Church Street and Portland Street.

Objectors raised concerns about overshadowing, the impact on the North Laine Conservation Area, and design.

One objector, whose details were redacted by the council, said: “It will tower over the nearby residences, blocking light that some people who can barely get out of their homes need.

“There will be a loss of privacy for local residents, who will not only be overshadowed, but also anyone within the proposed structure will be able to see into their homes.”

A petition with 21 signatures said that the plans were “out of scale” with the surrounding buildings and a “missed opportunity” for housing.

Permission has previously been given for offices on the site as well as for a “mixed use” proposal that included flats, shops and offices. 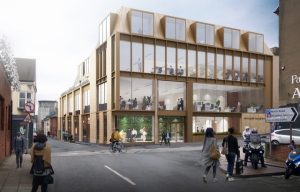 The North Laine Community Association also objected to the plans. It said that the proposed building was “overbearing on the adjacent grade II listed Drill Hall” and was concerned about the effect on people living in Portland Street and Windsor Street.

The community association’s planning co-ordinators Sandy Crowhurst and Barry Leigh said: “Although we welcome a car-free development on the site following more than 25 years of neglect and decay, what is being proposed is unsuitable and inappropriate.

“The opportunity for a mixed use site or for housing is an opportunity sorely missed and the area will be poorly served by this loss.”

A letter from an unnamed supporter said: “Brighton needs more high-quality office space and this location, close to transport links and other similar scale buildings around Church Street and Jubilee Street, is the ideal location.

“The site has been derelict for many years, attracting drug use and fly-tipping, so its development will be highly beneficial to this area of the city centre.”

SM Brighton’s planning agent Lewis and Co Planning said that, after advice from council planning officials, the proposed building was reduced from five storeys to four.

And steps were taken to reduce the “perceived mass of the proposals” for a site that is close to a few listed buildings.

The council’s Planning Committee is due to decide whether to grant the application at a meeting at Hove Town Hall next Wednesday (7 July). The meeting is scheduled to start at 2pm and be webcast on the council’s website.