Doctor Brighton’s to reopen as Star and Garter next spring

The new landlords of Doctor Brighton’s say that they now hope to reopen it as the Star and Garter next spring after a “nightmare” process of doing it up.

A company called Radfox took on the lease from the Kings Road pub in 2018, when the previous 50-year lease came to an end, with its rent reportedly tripling.

Since then, a perfect storm of unexpected structural problems, planning difficulties and of course covid has meant progress on reopening it has been painfully slow.

But a licensing application has just been submitted, and one of the team behind it, former Bottom’s Rest landlord Simon Duddington, says it’s hoped it should be open within the year.

He said: “We’ve been finding more and more problems. Throw covid into the mix and it’s basically been a nightmare.

“We had a manager lined up and they had to go because it was taking so long.

“It’s been horrendous and I don’t think we would have got involved with it if we’d known.

“But everyone is trying to stay positive and when it’s finished it will be worth it at least we will be getting a building which is good for the next 20, 30, 40 years.”

A new company, Star and Garter Brighton Ltd, has been set up to run the pub, and its directors include the founders of Bison Beer, Nick Vardy and Jack Cregan.

But as with the other Brighton pubs the trio owns, The Pond and Easy Tiger, the pub will not be a Bison Beer branded pub, although it will stock its beers.

The long term plan is to run a bed and breakfast in the rooms upstairs, which Mr Duddington says will be like “an old school B&B but with a modern format”.

But the original concept for the pub has been shelved while the pub market is up in the air, and the team is waiting until next year to finalise its plans.

Meanwhile, the focus is still on restoring the pub, which is owned by Brighton and Hove City Council, to its former glory, with the Star and Garter overseeing all the works and the city council checking and funding them.

New old fashioned signage will be put up on the outside of the pub, inspired by historic images of the pub.

Aluminium letters spelling out the pub’s name on the King’s Road frontage, and painted letters with the name, and the quote “Brighton that fashionable watering place” on the Little East Street frontage. 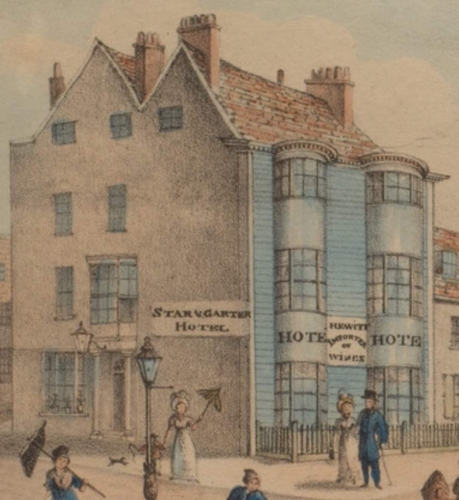 The licensing application asks permission to serve alcohol from 9am each day, closing at 1am on Monday to Friday and at 2am on a Saturday and Sunday morning.