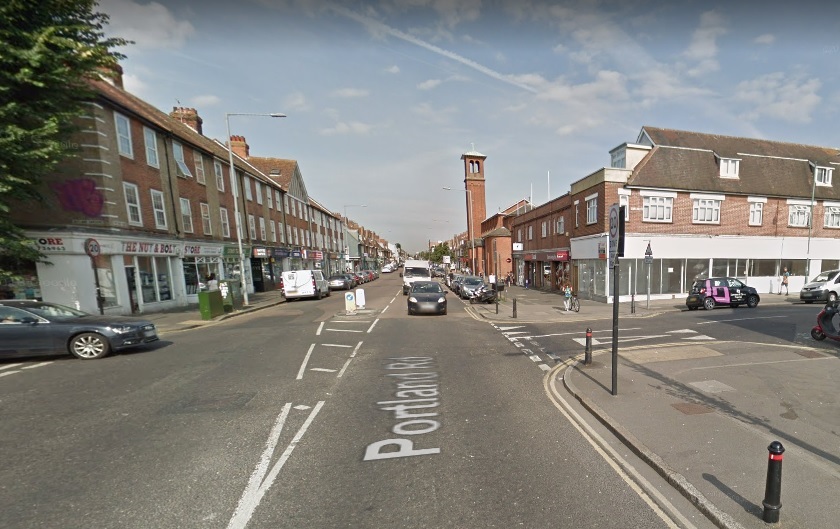 People living around Portland Road are generally not in favour of relocating the Old Shoreham Road cycle lane to their doorstep.

The Labour group says it is planning to vote to scrap the temporary lane on the Old Shoreham Road at today’s special environment, transport and sustainability committee, and ask officers to look into relocating it, with its two suggestions being Portland Road or New Church Road.

Portland Road was one of the options considered by Mott McDonald last year when it looked at how to improve the city’s cycling facilities as part of its covid response.

However, it was not chosen because it would require removing parking on both sides of the road, which would have affected loading for shops.

New Church Road was also not chosen because of the need for bigger changes to the layout to avoid conflict with bus stops, with a need for floating bus stops raised.

Brighton and Hove News asked members of the Portland Road residents Facebook group what they thought – and of the dozens who replied, most thought the lane should go elsewhere.

Sarah Tullet said: “New Church Road would be a better option than Portland Road, because there are less shops and businesses that would be affected by the loss of parking.

“A loss spaces along that road would have a greater impact on those that live here.”

Alpa Patel said: “Definitely neither. Unless they introduce one way traffic down each road.

Beverley Weaver said: “With the lack of parking for businesses and loading bays, it’s going to cause horror.

“There’s already issues with cars and vans parking on corners, blocking views as it is. It would be a shame for the loss of trade for businesses.”

Richard Cowle said: “Neither of those roads are suitable. B&H was built with relatively narrow roads.

“Cycle paths are just not possible in most locations, without huge, structural change.”

However, there were some people in favour of a cycle lane in Portland Road.

Tony Low said: “I think it’ll be great along Portland Road. I cycle along there everyday and the double parking people walking out and the car doors opening is so dangerous I have around five near accidents every time I ride along.”

Nick Sayers said: “It’d be slightly beneficial on Portland Road, but that’s already an OK road to cycle along.

“Where it’s *needed* is Old Shoreham Road, which was a dangerous, dirty, unpleasant place for anyone not inside a car before. Such a wasted opportunity.”

And one New Church Road residents were not keen on it coming to their road either.

Anna O’Brien said: “I drive the length of New Church Road most days and rarely have a journey without someone (or multiple people) pulling out in front of me from one of the roads that join it.

“I’m relatively protected in my metal box – and know to anticipate it – but I’d worry about the impact on cyclists.”

New Church Road is about 300m north of Kingsway, on which there is already a cycle lane and plans to improve it in the near future are expected to be approved this afternoon.

Portland Road is between 300m and 700m south of Old Shoreham Road – but the trainline running between them means accessing one from the other can involve a detour of more than a mile.