Lenham and his young team-mates show their potential

Of all the young soldiers who have marched with Sussex this season, no one has captured the imagination quite like Archie Lenham.

Lenham, however, is the one who has really caught the eye. When he made his Vitality Blast debut against Gloucestershire this year, aged just 16, he became the competition’s first cricketer born since the launch of the T20 game in England in 2003.

In his second match – a televised affair against Hampshire – he won the match award with figures of three for 14 in three overs.

He has now taken 10 wickets in the Blast at an average of 16.20. Will Beer, the other Sussex leg-spinner who is regarded as one of the most consistent slow bowlers in the white ball game, has taken nine wickets at 27.44, with an identical economy rate.

Sussex coach and former England leg-spinner Ian Salisbury said: “In five years’ time Haines will be 27, Carson will be 25, George Garton will be 29 and Archie will be 22 – and we could have quite a team.

“In terms of genes and lineage, I have no doubts about Archie. His granddad (Les Lenham, a Sussex batsman of the 1950s and 1960s who became one of the country’s most respected coaches) coached me, I played with his dad, Neil, and his mother was a highly competitive hockey player.

“The talent is there and so is the temperament. We make sure we look after the person at Sussex and there is no doubt in my mind that Archie is ready. He might look like a little boy who’s still at school, which he is, but he’s a fierce competitor who’s aware of all the pitfalls.”

Lenham bowls faster than the more flighty Beer but because he’s short he manages to get impressive loop on the ball.

Salisbury said that the pace was important, adding: “If you look at Shane Warne and Muttiah Muralitharan, they both bowled with good pace, so did Anil Kumble and now Rashid Khan, who has helped Archie learn all the tricks.”

A technically sound batsman, Lenham could also develop into an all-rounder when he gathers more strength.

Lenham himself said: “It’s been pretty amazing – a great start to my career. Ian’s been exceptionally helpful to me with all aspects of leg-spin. He’s been really helpful talking about what pace to bowl, line and length and everything.

“So has (former Sussex captain and England batsman) Alan Wells, at Bede’s School. And then, of course my dad and granddad have helped since the day I was born. 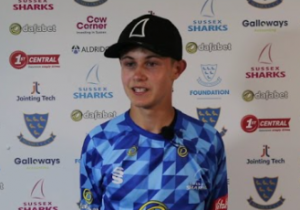 “Then, in the Blast team, Will, (captain) Luke Wright and Chris Jordan have given me great encouragement. They don’t mind if I get hit for sixes as long as I bowl aggressively and take wickets.

“I’ve been playing for Sussex teams since I was under nine, so I feel at home. I’ve played with a lot of my team-mates at various age group levels so it feels nice and cool to be playing in the first team with them.”

Sussex have had to field severely depleted teams in recent times as England, the IPL and now the Hundred have taken away some of their leading players.

But they have turned this to their advantage, fielding a number of talented youngsters who have grown up together and could soon form the nucleus of a formidable team.

They will be better when they get some of their senior men back – a team must manage the present as well as build for the future, look for a balance of experience and youth. But right now it’s the youth who are exciting Sussex supporters.