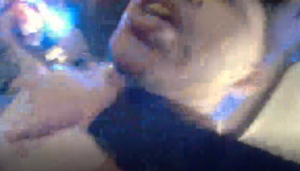 A 19-year-old student who “behaved like a thug” was given a lesson in leniency by a judge at Hove Crown Court.

Jacob Clovis weighed in when police were trying to arrest a woman at a lockdown party at York House, in Refectory Road, on the Sussex University campus at Falmer.

Clovis was arrested and charged with assaulting two emergency workers – PC Daniel Paine and PC Will Briers – charges that he denied.

The pair had been trying to detain student Priya Kaushal after being called to the campus party during the coronavirus lockdown.

Francis Lloyd, prosecuting, told the court: “The young woman was arrested on suspicion of having drugs. The young man was aggressive.

“His behaviour could best be described as boorish. He was a young man of good character. He was a student at the time.”

Mr Lloyd said that, after Clovis intervened, Miss Kaushal escaped before being caught and then released.

The court was shown a video of what happened (below), prompting Judge Stephen Mooney to say: “He behaved like a thug.”

Mark Gatley, defending, said that the young student had made “a substantial mistake … He has lost his good character”.

Clovis, a first-year student who was living in the East Slope student rooms, in Refectory Lane, appeared at Hove Crown Court and pleaded guilty to a public order offence.

He denied assaulting the two police officers earlier this year – and the prosecution offered no evidence – but he admitted using threatening or abusive words or behaviour.

The court accepted the not guilty pleas and Judge Stephen Mooney sentenced Clovis for the less serious charge which followed the fracas on Thursday 25 March.

Judge Mooney said that Clovis had had a good upbringing but added: “He behaved like a thug. If that has some impact on his future, that is his own fault.

“I watched with mounting disbelief the way she reacted when she was being asked quite reasonably about a party during covid.

“He was drunk. This was not the product of some sort of righteous indignation about policing. He was drunk and thought he’d wade in.

“He was drunk. He behaved appallingly. He made a mistake. He went to a party that shouldn’t have taken place in the first place because of covid. Had he been compliant, the escalation would never have taken place.”

Judge Mooney said: “You should be thoroughly ashamed of yourself.

“You are fortunate to have a loving caring family. One day you may have a family yourself. The anguish you will have caused them is incalculable.”

Judge Mooney added: “Don’t be such a stupid idiot again. The next time there’s trouble, walk away.

“You really do owe your parents a huge debt of gratitude.”