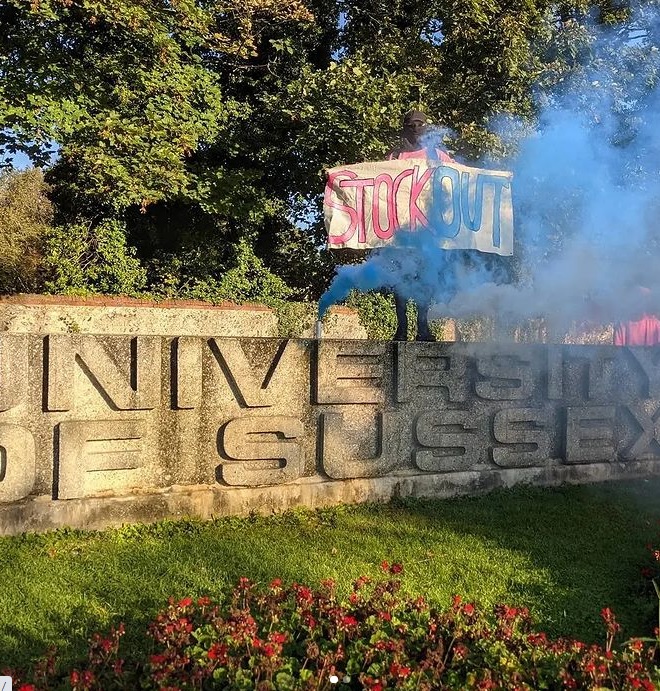 UPDATE: A targeted campaign against a philosophy professor accused of transphobia is being investigated by Sussex Police.

Posters demanding the University of Sussex fire Kathleen Stock appeared on campus yesterday, and smoke bombs were set off as a masked protester held a banner saying Stock Out at the entrance to campus.

The university has also condemned the campaign and says it took swift action to combat it.

The protesters say Professor Stock seeks to exclude and endanger trans people by, for example, supporting female-only spaces and sport and questioning the safety of puberty blocking drugs prescribed to minors.

The campaign has been publicly supported by one of Stock’s colleagues, art history lecturer Francesco Ventrella.

In her latest book, Material Girls, Stock argued the discussion around trans theory and the definition of what a woman is had become surrounded by toxicity.

This is not the first time she has faced calls for her sacking.

This latest campaign today posted a “mission statement” on its Instagram page which said: “Stock is one of this wretched island’s most prominent transphobes, espousing a bastardized variation of ‘radical feminism’ that excludes and endangers trans people.

“She has spent years campaigning for the exclusion of trans people from ‘women’s only spaces’ and against trans and non-binary people’s right to self-identify as any gender.”

It concludes: “Our demand is simple: fire Kathleen Stock. Until then, you’ll see us around.”

A police spokesman said: “On Wednesday, 6 October we received a report of harassment of an employee at the University of Sussex and we are investigating.

“We take all reports of harassment seriously and will seek to investigate and to support victims.”

Details of support and information available for victims of harassment are available at https://www.sussex.police.uk/advice/advice-and-information/sh/stalking-harassment/

A University of Sussex spokesperson said: “We were extremely concerned to see the harassment towards our staff member and took immediate action in response to this, which we continue to do.

“We are deeply committed to being a safe and inclusive university, which values and advances equality and diversity, seeks to resolve conflicts, advances good relations and upholds lawful free speech.

“As a university community, we must be able to have complex discussions without bullying or harassment. We will always take swift action when this occurs.

“Our role as a university is to facilitate such conversations to advance shared understanding and common agreement. We insist that these are carried out respectfully and are always protective of our staff and students.”

In May, the University of Essex apologised to two female professors after an independent inquiry found the university had breached its free speech duties when student complaints led to their invitations or talks being cancelled.