Who is the Brighton robbery suspect captured on camera?

Police are trying to trace a Brighton robbery suspect who was captured on camera. 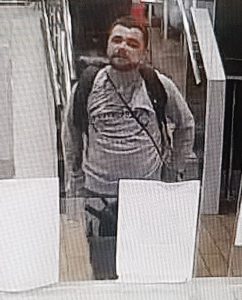 This afternoon (Friday 22 October) Sussex Police published a security camera shot of a man they want to interview.

The force said: “Police investigating a robbery in Brighton are looking to identify this man.

“The victim, an 18-year-old man, reported being approached in The Lanes on Tuesday 3 August at around 1.15am by a man asking if he could use his mobile phone.

“When the victim refused, he was assaulted and the suspect took his mobile phone, wallet and rucksack.

“Officers believe the man pictured could help with their inquiries.

“Anyone who recognises him, or who has any other information which could assist the investigation, is asked to report online or by calling 101, quoting serial 72 of 03/08.

“A man previously arrested in connection with the incident has been released with no further action being taken.”