Councillors give their verdict on seafront cycle lane

Councillors have agreed to keep a seafront cycle lane and consult on future changes.

The cycle lane was installed in place of a lane of other traffic on the A259 on the south side of King’s Road, Brighton, and Kingsway, Hove, in August last year.

It was one of Brighton and Hove City Council’s active travel measures funded by the government during the coronavirus pandemic.

A report to the council’s Environment, Transport and Sustainability Committee yesterday (Tuesday 16 November) said that the number of cyclists using the seafront cycle lanes had risen 51 per cent.

The report also said that there were indications that the new cycle lane had improved safety.

Conservative councillors voted against and called for long-term options to replace the temporary infrastructure along with the other two political parties.

Councillor Robert Nemeth said that the current lane was “worse” than what was there before and wanted changes before it was made permanent.

He said: “It’s not very logical, it’s ugly, it’s potentially discriminatory and some of that is at least recognised because, hopefully, we’re going to vote to redesign it. I don’t want to vote to make permanent the current one.”

He suggested a look at using the prom as it did not have junctions.

Green councillor Jamie Lloyd said that he understood Councillor Nemeth’s point about the promenade but he was against the idea of a shared space with pedestrians.

Councillor Lloyd said: “It doesn’t work when you have people and bikes in the same place. Bikes need to reclaim road space.

“If we want to reduce private car use, increase active travel, it’s been shown this is the way forward.” 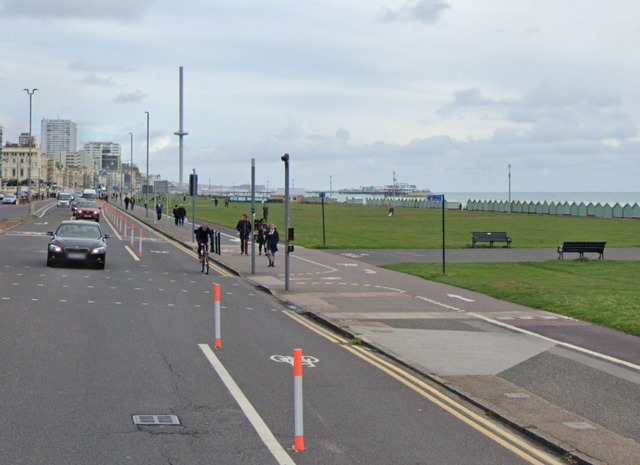 Labour councillor Nancy Platts asked if the council could move disabled bays along Hove seafront, which have the cycle lane between them and the pavement.

In June, disability rights campaigner Pippa Hodge told the committee that disabled groups were horrified to see the bays offset from the pavement.

Councillor Platts said: “We know blue badge members highlighted what they felt was a dangerous part of the scheme.

“Safe access for the blue badge holders needs to be a priority as it is for all other users. One solution is to push the bays back alongside the pavement.”

She was told that council officials were monitoring road safety and looking at various options – and five more disabled parking bays were planned along the seafront.