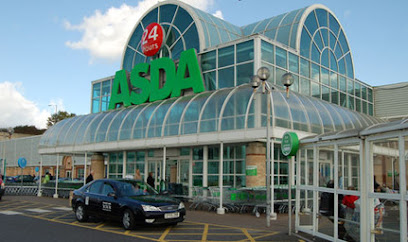 A second set of plans for what appears to be a KFC drive-through in another Asda car park have been submitted.

Brighton and Hove News reported last month that Euro Garages had submitted plans for one in the car park at Asda in Brighton Marina – known by some locally as Down Asda.

Now, new plans have been lodged for a near-identical drive-through in the south west corner of the car park of Asda in Crowhurst Road, Hollingbury – or Up Asda.

As before, the application includes details of the restaurant – including award-winning vegan options and no palm oil or trans fats.

The application says the restaurant would be open 24 hours, seven days a week, and would employ 20 full time and 20 part time staff members.

It would be 245sqm, with space for 54 sit down diners, one standard guest toilet and one disabled toilet.

And as with the marina plans, there would be a delivery hatch for Deliveroo and Just Eat drivers to collect orders from.

Both applications have included an assessment of nearby local shopping centres and concluded there are no available sites there which would be suitable for a drive-through restaurant.

Meanwhile, the marina application has now attracted several comments from members of the public objecting to the plans.

All objectors details are redacted on the council’s planning portal.

One said: “We already have enough litter and late night noise issues with the existing McDonalds drive thru – so totally object with another drive thru attracting even more anti social behaviour.

“Let them build it where those types live and let them live among the litter. Drive Thru’s are not used by the marina residents but we have to clear up their litter.

“Even better still can we also close down the existing McDonalds Drive thru. If not get some litter inspectors to hand out stronger penalties – and be around at late hours when these miscreants come out.”

Another said: “The marina has problems with night time boy racers that are attracted to speed around both noisily and dangerously and this type of out let will further invite this unwanted anti social behaviour.

“The Asda car park is already poorly managed with litter and trolleys scattered all over, a drive through restaurant in the mix will only lower the tone even further.”

Another said: “The marina already has one Drive Thru, fast food venue. It is incredibly busy, with a constant stream of cars.

“Drive Thru restaurants are environmentally destructive, in the amount of traffic generated by customers.

“There is also a litter problem from the current McDonalds – another drive thru would add to this problem.

“Additionally, traffic can also already be very heavy in the area – this venue would add to that, the current infrastructure already struggles.”

The Hollingbury application says: “The application site is situated in a mixed-use area comprising predominantly retail, industrial and commercial uses.

“These properties are too far away, and are screened by the retail units at Brighton Retail Park, to be disturbed by any activities related to the operation of the proposed restaurant.

“It is proposed that CCTV will be installed to discourage anti-social behaviour in the vicinity of the restaurant.

“Furthermore, the restaurant operational procedures will require regular litter picking patrols to be undertaken 3 times a day to maintain the quality of the local environment.

“Litter bins will be provided outside the restaurant and will carry anti-littering symbols to encourage customers to dispose of litter responsibly.

“A contact point for email and mail contact will be established to allow the local community to contact the restaurant to express concerns about discarded litter or related issues.”