The council’s schools policy is set to be thrown into the spotlight tomorrow (Thursday 16 December) when a series of petitions are due to presented.

Thousands of those involved with individual schools are opposing the council’s plans to reduce the number of “entry” places.

It is worth reflecting on the bigger picture – and the wider impact – of the council’s misguided plans.

Faced with families leaving Brighton and Hove at a record rate, the council is looking to reduce the number of primary school places that it offers to ensure that supply matches demand – and demand is falling by 4.75 per cent a year.

Bevendean Primary, Coldean Primary, Rudyard Kipling Primary and Woodingdean Primary have been earmarked for a reduction in their annual intake from 60 to 45 pupils.

Carden Primary, in Hollingbury, and Queen’s Park Primary would see a reduction from 60 to 30 pupils and Saltdean Primary from 90 to 60 pupils.

While this may mathematically do the trick for the council in reducing places to an acceptable level, this approach is poorly thought through, incorrectly targeted geographically and demographically and will be counterproductive to the health of the city in the long term.

It also goes against all environmental policies, given that children will be driven across the city to attend non-local schools.

Following many years of council policies encouraging students to live in the city, including decisions to grant planning permission to split family homes into flats or shared houses – known as HMOs – the chickens have come home to roost.

With each family home that is lost, another family departs and there is less demand for school places.

The obsession with students has cost parts of the inner city dearly and this has been reflected in the citywide statistics.

The areas that have retained the bulk of their family homes and families have tended to be those located in the outer suburban parts of the city, such as Hollingbury, Patcham and Woodingdean.

It is here that there remains a strong demand for school places at the local schools. Each of these schools are well managed financially – another argument for keeping these schools as they are.

It therefore makes no sense that the council should target these areas for the reduction in school places that the city needs.

It is also a counterproductive policy in the long term and will almost certainly cause another wave of family departures from the city. 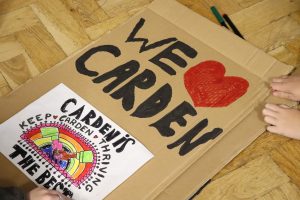 As parents at the affected schools have said, if these changes go ahead, many children will have to travel to other areas of the city to go to school in future.

Those who do gain a local place may well have to join mixed age group classes in some instances, which is not ideal for parents, teachers or children.

All of this will provide another push factor for families in the area who may well decide that Brighton and Hove is just not the place for them to raise a family. All because this is based on inaccurate data on where families are moving to.

For many years the council’s policies have prioritised the needs of students, not families. Students of course do not pay council tax and so with every family that leaves, the city’s tax base is shrinking, placing an ever-increasing burden on those who remain.

The lack of attention to many areas, including family-size housing, the state of the city, anti-social behaviour and Brighton and Hove’s continually rising council tax bills all contribute to driving young families away.

Brighton and Hove is meant to be a city for all but the council’s policies do not reflect that – or the needs of families.

Cities thrive with a diverse economic base – and families are a key part of that. There needs to be a change of emphasis if Brighton and Hove is going to have a secure future.

Areas like Patcham and Hollingbury, Bevendean and Woodingdean must be protected as places in the city where families can live and children can go to their local school.

The council’s current schools policy is counterproductive, undermines this aim and needs to be rethought and revised.

Councillor Anne Meadows is a Conservative on Brighton and Hove City Council. She represents Patcham ward and is a member of the council’s Children, Young People and Skills Committee.