Police have issued a fresh warning to electric scooter riders and owners that their e-scooters could be seized if they ride them in public.

Sussex Police said: “E-scooter riders and owners are being reminded that their vehicles could be seized if they are seen riding in a public place in Sussex.

“Sussex Police are issuing this warning to those who may have received an electric scooter as a Christmas gift to ensure owners are aware of the law about using them.

“It follows the convictions of two electric scooter riders in recent weeks – and those considering using them are being advised to make sure they stay within the law.

“E-scooters are classed as a powered vehicle, which means they are subject to the same laws as motor vehicles, but at the present time it is not possible to register, insure or tax the vehicles for use on the road.

“Earlier this month, 31-year-old Carl Bond was convicted after he was seen acting suspiciously while riding an e-scooter by police in Seaside Road, Eastbourne, on Monday 6 September.

“He was arrested on suspicion of possession of cannabis, using a motor vehicle without insurance, driving otherwise than in accordance with a licence and driving while disqualified.

“On Wednesday 15 December he appeared before Brighton Magistrates’ Court where he was sentenced for all four charges.

“The court told Bond, of Saxby Close, Eastbourne, his e-scooter has been seized and ordered him to do 200 hours of unpaid work and 30 rehabilitation activity requirement sessions.

“He must also pay an £85 fine and was disqualified from driving for a further six months.

“Meanwhile, Sussex Police also reported how George Vakis, 19, of Thakeham Close, Bexhill, was sentenced to one year of detention in a young offender institution after he admitted wounding an officer while riding an e-scooter.”

Chief Inspector Michael Hodder said: “These cases are a reminder that owners of e-scooters can face being arrested by our officers if they are seen riding in public places.

“E-scooters are becoming more widely available to purchase and, although it is illegal to ride a privately purchased e-scooter in public, they are not illegal to purchase.

“Many people may have bought one as a gift for Christmas. 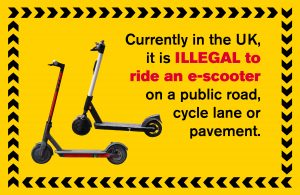 “Riders are subject to the same laws a motorist would need to drive lawfully on the road, including the requirement to have a valid licence, insurance, registration plates and vehicle licensing – and to have the correct registration.

“E-scooters are illegal because there are currently no legal ways to register, insure or tax them.”

Sussex Police added: “Officers have the power to seize vehicles under section 165 of the Road Traffic Act.

“Across the country there are ‘Future Transport’ trials taking place, with the aim of gaining further insight into the environmental, health and safety benefits of these types of vehicles.

“Currently there are no areas in Sussex taking part in these trials and e-scooters remain illegal to use on public roads.”

Chief Inspector Hodder added: “Please make sure you keep and use your e-scooter on private land only, with the owner’s permission, to ensure this does not happen to you.”