Volunteers wanted to help save our seagulls and pigeons

Volunteers are wanted to help rescue seagulls, pigeons and other birds in and around Brighton and Hove.

The South Coast and Sussex Bird and Gull Rescue Network said that it needed more voluntary rescuers to join their group which covers the coastal area from Seaford to Worthing.

If a gull or pigeon is found in need of medical help in someone’s garden or on their roof, volunteers take it to Bird Aid in Hailsham.

Bird Aid was threatened with closure last year which led to a huge fundraising effort.

Justin King, who heads South Coast and Sussex Bird and Rescue, said: “It’s the chicks that are particularly vulnerable.

“Even if you don’t want to go up a ladder, if you can access a driver, that’s the next best thing.

“If a chick is found wandering the streets, we have to take the chick away to Bird Aid.

“We can’t really guess where the chick has come from. If you put the chick back on the wrong rooftop, it gets attacked.

“The aim is to get a bird out of harm’s way. Either keep a bird at home or drive it to safety.”

When asked what volunteers would have to do, Mr King said: “In particular, we need more people available during the day, but we really would like to attract those with knowledge of ladders, and comfortable with heights.

“Those who work part time, in early retirement, such as builders, those previously in the construction industry and/or those who are dedicated to learning.

“Whatever they can manage in their spare time or during daytime hours is appreciated.”

The network also needs drivers to drive birds to Bird Aid in Hailsham, off the A22. 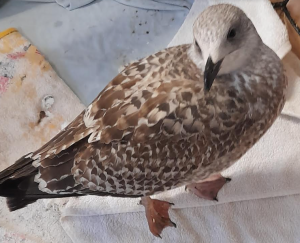 He said: “People can help as much or as little as they want. Volunteers set the pace and tone of what they feel is comfortable for them.

“There are some cases where not every rescue has a happy outcome and sometimes it can stay with you. That said, the feeling of getting a casualty out of harm’s way and to the right place is always rewarding.

“Working as part of a team is critical. It’s always a learning process – and after four to five years I still get things wrong and we can’t save every casualty.

“But people are always on hand to offer guidance and the right advice. So far, we’ve done well.

“We cannot do what we do without funding from the public. However, we have a major concern which affects everyone. From Friday 1 April, the shocking cost of living is going to change everything for all of us.

“Energy and fuel prices are going to sky-rocket even more which will cause everyone to reprioritise. This alone could very much change the landscape for everyone.

“Voluntary projects could take an alarming back seat. Many of our casualties may go unrescued and so many other people will be forced to work much harder or fall into poverty. 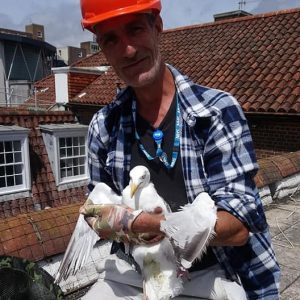 “I’m really worried for everyone. What we as dedicated volunteers do – many of whom work full time – could be seriously affected.

“As the situation stands, this summer, the public will need to play a much bigger part and not rely on volunteers to come out at a moment’s notice. Sometimes it will happen but other times it won’t.

“Remote assistance will have to play a much bigger part which was something we started this year. Finders of casualties should be prepared for this.”

People will be taught how to put a gull or pigeon in a box and feed it. And in response to the cost of living crisis, the network is providing pet food for people who can’t afford it.

Mr King said: “People don’t give to gulls. They give to cats and dogs.”

To donate to South Coast and Sussex Bird and Gull Rescue or volunteer as a rescuer or driver, visit the group’s Facebook page.