Review: Bad Luck Cabaret at the Spiegeltent 8th May 2022 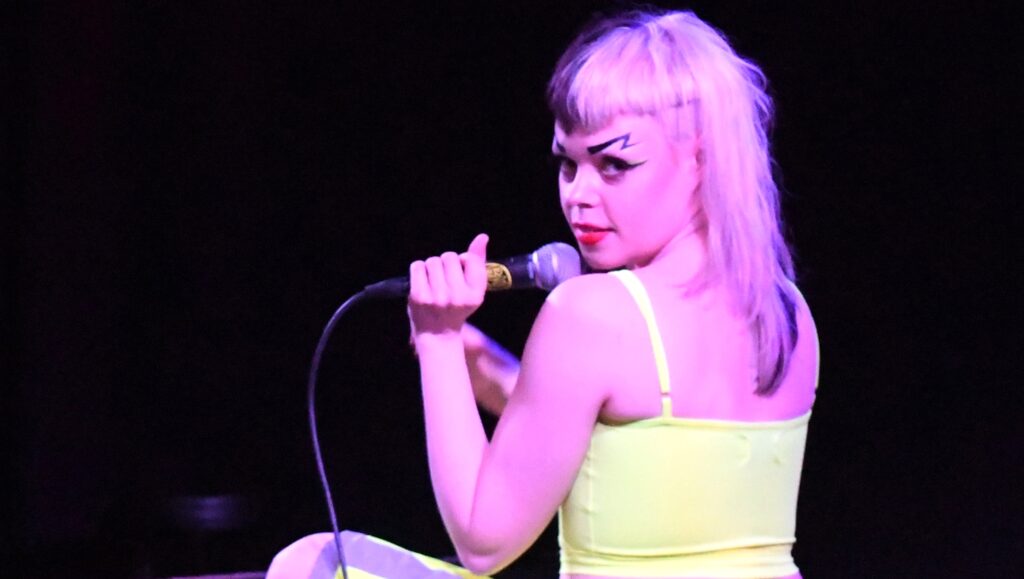 Laurie Black returned to her rightful home in the Spiegeltent this Sunday. She takes to the boards in this historic wooden theatre as if she has always lived there. She absolutely owns the stage and the grand piano as if it were her playground where she is Queen and rules with a swish of her luminous skirt – but in an absolutely democratic and inclusive kind of dictatorship! As well as playing the grand piano she blasts out her own dark synth pop which sounded great through the Spiegeltent sound system with some dirty, bassy, squelchy noises accompanying her dry and clever lyrics. I particularly liked Astrozero (as opposed to Astronaut – get it?) which predicts the demise of the billionaire space travelling class.

Laurie seems to have a very talented set of friends who she brings along on her cabaret journey. Natalie Gathi accompanied one of Laurie’s numbers with some interesting shiny spinning balls and a kind of sparkling, glowing whip thing. Mesmerising and very atmospheric to a soundtrack about Aliens.

Charlotte Fox is a comedian who seems to want to simultaneously be a Zumba instructor. How she moves so much and still keeps talking I don’t know. She is a ball of fizzing energy and fun with some of the most outrageous and hilarious stories. Naughty and nutty and high adrenaline comedy. Catch her solo show, two dates, later this month:

Jamie Mykaela has a ukulele and a voice which just doesn’t match the size of her instrument. She performed some remarkable vocal feats which almost blew the top of the Spiegletent. She is extremely funny and cheeky and charmed the audience within a microsecond of coming on stage. I was so happy to see her join Laurie again after seeing her last year but then thinking we had lost her to the Australian cabaret scene. If you want to catch her solo show you will have to go to the Camden Fringe.

Last up was the ridiculously funny clown Luke Rollason. My companion at the show complained how much his sides ached after Luke finally let us catch our breaths leaving the audience wiping tears of laughter away. Some surreal stuff went on that is for sure and Luke’s timing and clowning mastery nearly brought the house down. People were losing it left, right and centre.

I don’t know why I keep thinking the Spiegeltent is going to fall down due to raucous laughter and singing. Hopefully it will last out the Festival! Plenty more great shows to go including a second installment of Bad Luck Cabaret on 4th June.