Get out your ‘Sunnbrella’ and put on that vintage dress 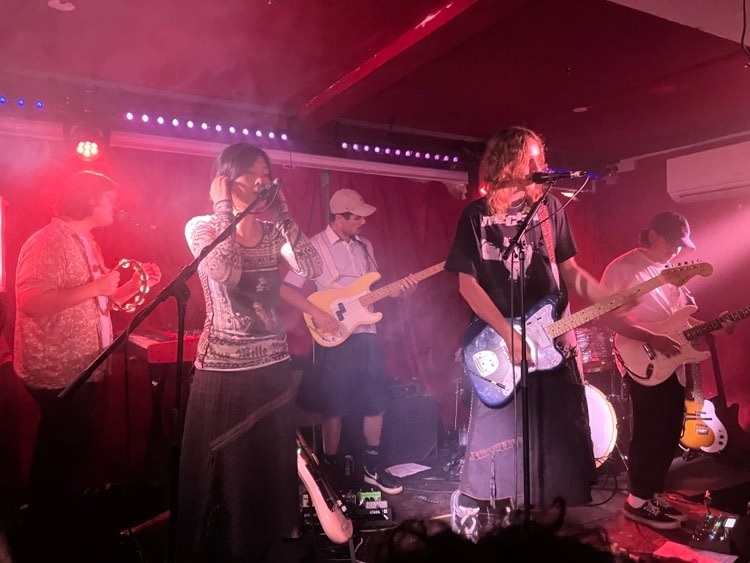 Tonight is my first visit to Paper Dress Vintage (352A Mare Street, Hackney), and it is a visit that I quickly realise has been long overdue. It’s a fabulous little venue. The ground floor is a vintage clothes shop. At the end is a bar which I presume also doubles as the shop counter. There’s a small outside drinking area, and the venue itself is upstairs. This is also small. In fact, everything about the place is small but perfectly formed. 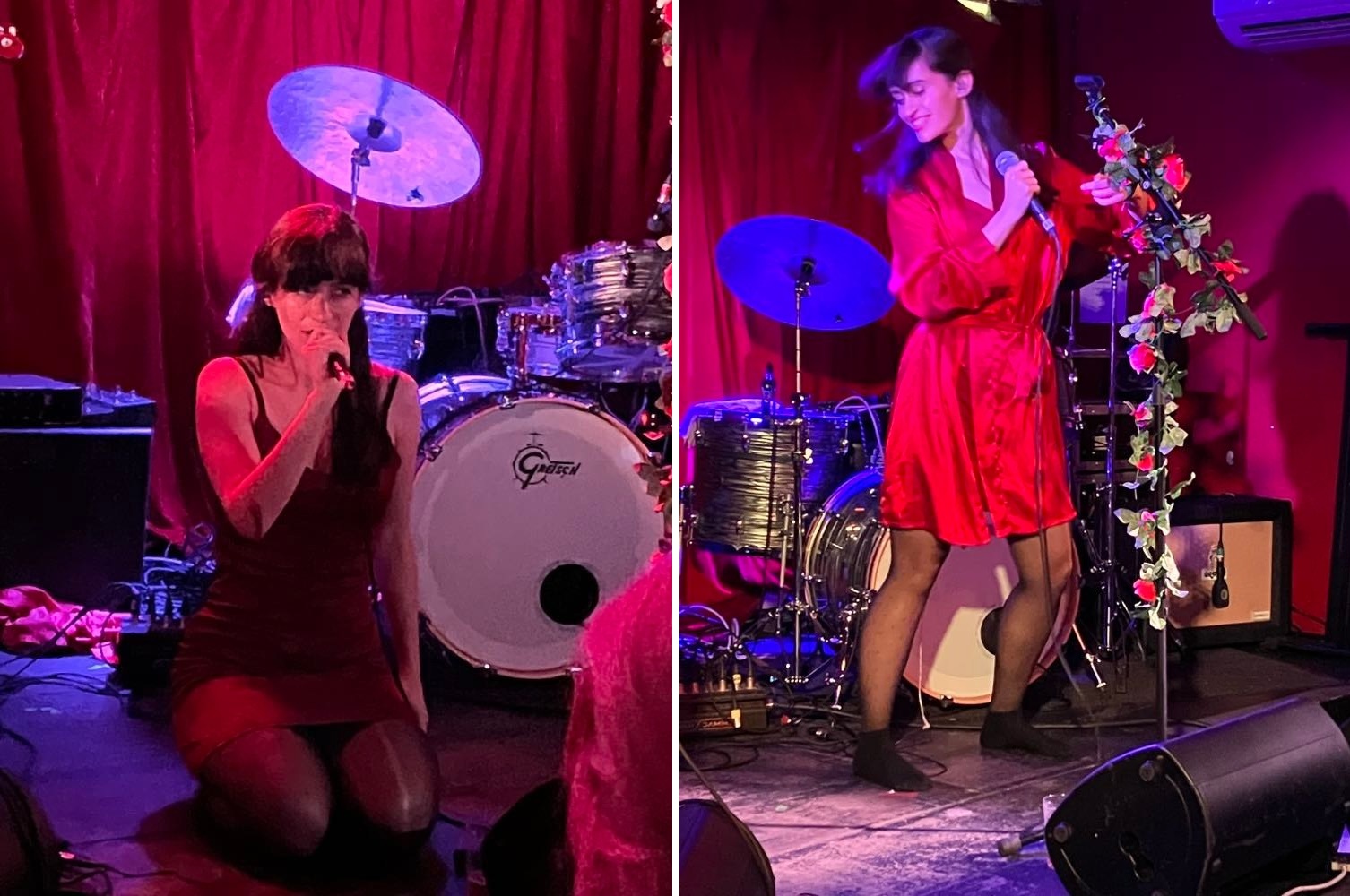 There is a fittingly eclectic bill tonight for our delectation, and stepping up first are Minimal Schlager. Schlager is a type of European pop music which is generally catchy and vacuous. As the name of the band suggests, this is not a type of music that Minimal Schlager have any truck with. The band comprise siblings Alicia Macanas on vocals and occasional keyboards, and Fran Parisi on guitar and keyboards. They played in Berlin, their home city, last night. It was their first gig with a drummer. Unfortunately they could not bring him over. He was unable to get a permit to work for one night because of Brexit.

They channel early 1980s electro pop although without being derivative. There are hefty chunks of Joy Division, New Order and Tubeway Army influences. There are lots of Blue Monday beats throughout. That’s okay though, because effectively they are introducing a whole new generation to this music. They have a new album, ‘Love, Sex & Dreams’ which will be released on 9th September, and quite a lot of tonight’s set is from it. 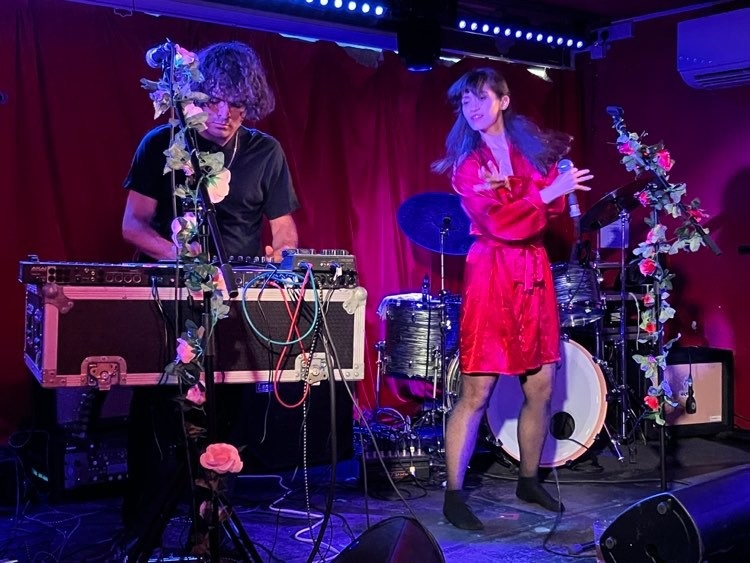 Fran is clearly a past master at making guitars not sound like guitars. His guitar is heavily treated throughout. He reminds me of Kevin Shields from My Bloody Valentine, but thankfully much quieter!!! The band attempt to both wear their influences on their sleeve and end the set with a cover of Joy Division’s ‘Disorder’. However, we demand another song; and moreover, we get one! It’s actually two songs from the new album merged into one: ‘Prayers’ and ‘Nana Del Caballo Grande’. Minimal Schlager are well worth catching live. Although it appears that if you want to see them in the next couple of months, you’re going to have to go to Austria or Spain. Could be worse.

Find out more from this act by visiting their ‘linktree’ HERE. 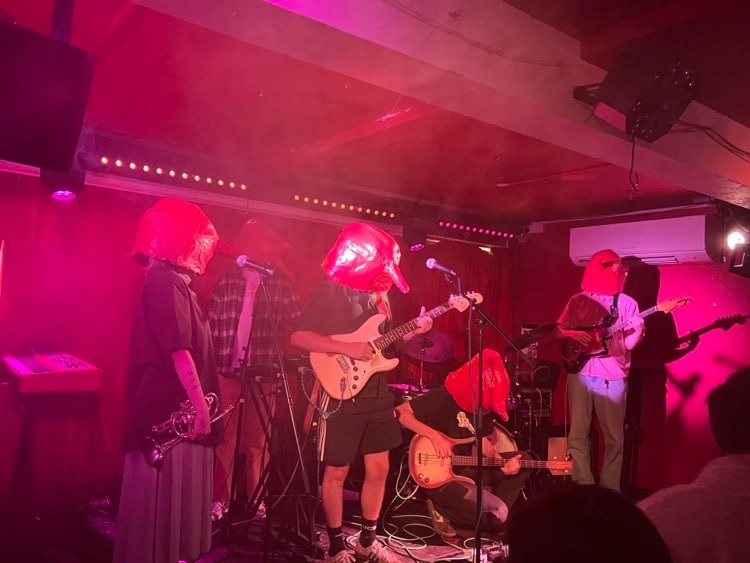 Next up are Tapir! with an exclamation mark at the end. Tapir! are interesting in that they have a concept. They tell the story of ‘Pilgrim’, a creature embarking upon an adventure through a fictional universe made up of green hills and red creatures, unearthing its history and meeting all kinds of other creatures along the way. If this sounds like something from the prog era, it’s not a massive leap to describe Tapir’s music as prog, an impression reinforced by the fact that they play the first song wearing red papier mache masks which cover each musician’s head as if they were Frank Sidebottom, or members of The Residents. 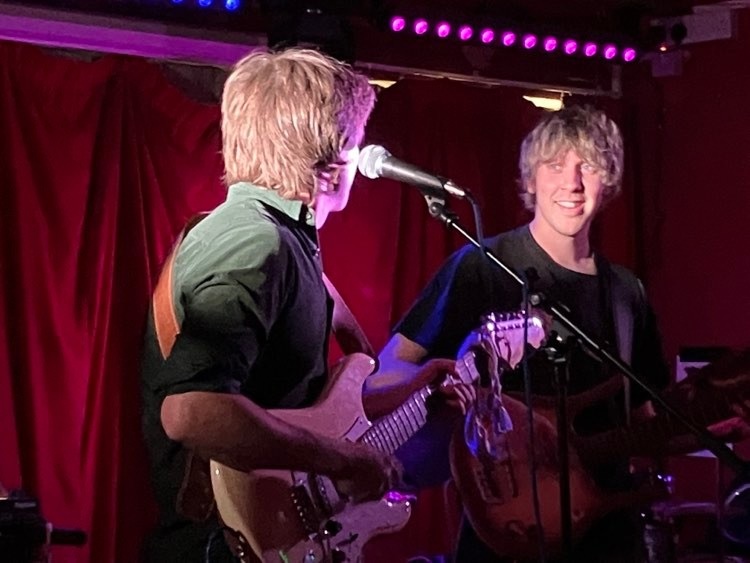 They don’t have a drummer, so are propelled by electro beats, which for most of the time are quite light. Their collective musicianship is very impressive, and the music itself is certainly varied. A friend of mine describes them as “noodley”. I would prefer to describe them as “dextrous musicians”. They’re rock ‘n’ roll too: a girl throws her bra at them and it drapes itself around the headstock of the singer’s guitar! It’s quite possibly the funniest thing I’ve seen at a gig for a long time. Unfortunately it would appear that the tale of Pilgrim is not available on record. I certainly couldn’t find it on the internet. I hope I’m wrong. Perhaps somebody could enlighten me? If there’s an album out there, I want it!!!

Check out the Tapir! singles so far on Spotify. 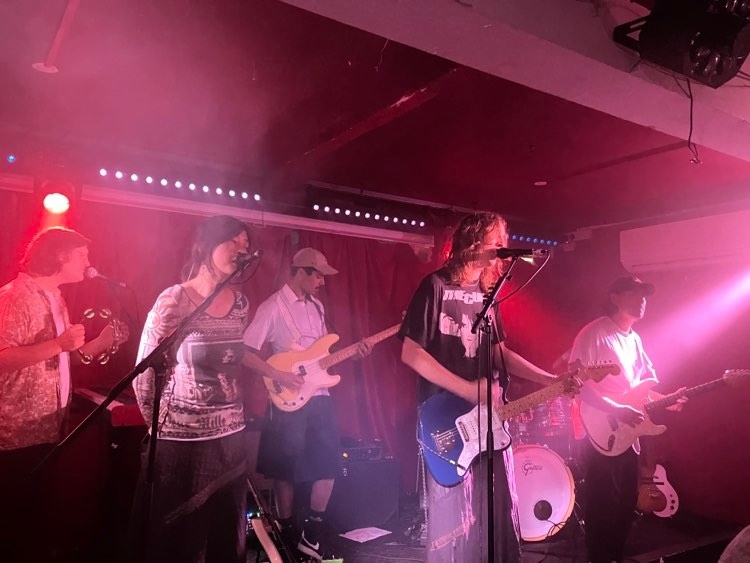 Sunnbrella are the brainchild of David Zbirka, who is from Prague. They are a six-piece with David on guitar and vocals, one other guitarist, bass, drums, keyboards and a backing vocalist. I’ve seen them described as ‘shoegaze’, but I would describe them more as Generation X slacker rock, although with the quality of songs on offer David is clearly no slacker!

Personally they remind me of Dinosaur Jr., and David himself reminds me of Ty Segall: the songs are of a sufficient quality to warrant that comparison. The songs are total earworms. You can see what I mean by visiting their Bandcamp page HERE which includes the latest single ‘Wrong’, ‘Fever Dream’, ‘Pauline’ and others. 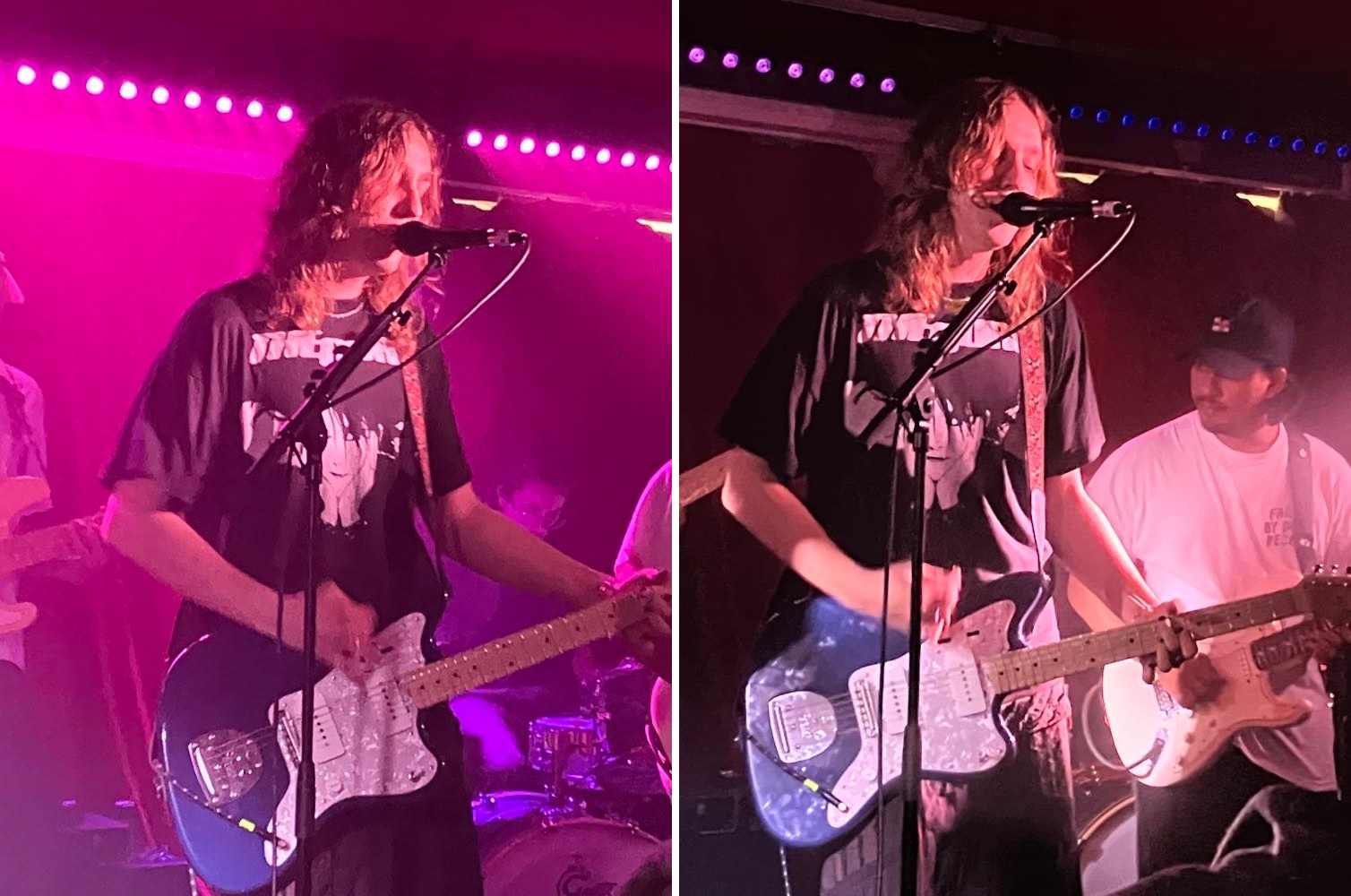 Unfortunately I have to miss the end of Sunnbrella’s set due to the rail strike and my need to get back to West Sussex. Nevertheless, they are worth catching next time they play.

Find out more about Sunnbrella by visiting their ‘linktree’ HERE.

This has been a very impressive bill featuring three very different but excellent bands. The promoters are doing a great job as this show was part of the ‘Hello Again, Hackney’ series which Hackney Council are running to encourage local residents to return to the borough’s grassroots music venues after a very difficult period. It certainly worked as this evening’s concert was sold out. 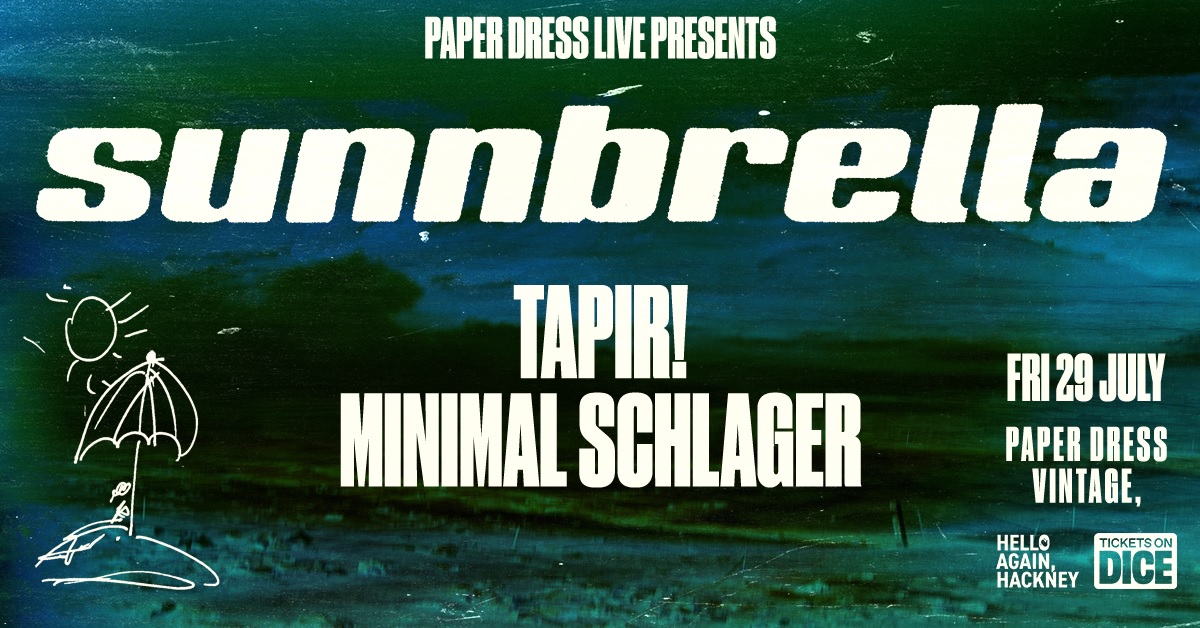