Brighton and Hove Albion winger Kaoru Mitoma was one of three Japanese players to miss in a penalty shoot-out as Croatia went through to the World Cup quarter finals. 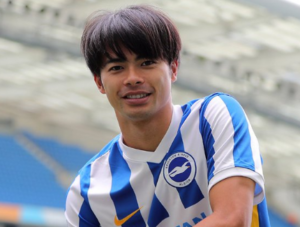 Earlier, before the game went to penalties, the 25-year-old Japan international had a great chance to win the match, having run half the length of the pitch.

From the edge of the area, Mitoma fired his shot, forcing the Croatia goalkeeper Dominik Livakovic to make a spectacular save.

It was a foretaste of what was to come after a second-half equaliser from Croatia cancelled out Japan’s first-half strike and left the score 1-1 at full-time – and after extra time.

Mitoma, whose assist against Spain in the final group match has been the subject of some controversy, came on for Yuto Nagatomo just after the hour.

But he was unable to break through and the match was set for a stalemate in open play.

After extra time, Takumi Minamino took the first of the penalties – but Livakovic saved and then Nikola Vlasic put Croatia in front.

Mitoma stepped up for the second spot kick for Japan. He aimed low and to his left but Livakovic anticipated it perfectly.

Croatia went on to win the tie 3-1 on penalties. Marcelo Brozovic netted next, with Takuma Asano replying for Japan, making it 2-1 to Croatia.

Marko Livaja hit the post, giving Japan a chance to get back in contention, but Maya Yoshida was unable to beat Livakovic.

And when Mario Pasalic slotted the ball home for 3-1, it was all over.

Alexis Mac Allister and Robert Sanchez are now the only players still representing the Albion at the tournament in Qatar.