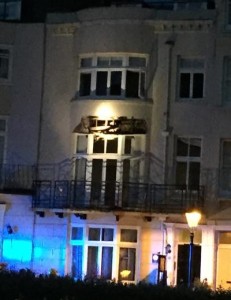 Firefighters have been called to Kemp Town tonight after part of a first floor bay window collapsed onto the street below.

East Sussex Fire and Rescue was called to the privately owned house in New Steine in Brighton at 9.14pm this evening after receiving reports of a dangerous structure.

By 10.30pm, firefighters had cleared up the debris and left the scene.

Sharon Ferguson, manager of Alston House Hotel next door, said: “We heard a thump next door and lumps of debris had fallen from the building next door. The firefighters have come up and cleared it up nicely.”