St George’s Day may have passed in Brighton without incident – but a nationalist group which has formed part of previous March for England demos in the city is planning on returning here next month. 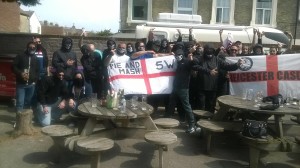 Brighton Police were out in force on Saturday, April 23 this year as a precautionary measure in case the same marchers who had caused trouble in previous years decided to come back again.

A Stop MFE demo saw scores of anti-fascists celebrating “seeing off” the nationalist marchers this year on the Level. But now South Coast Resistance has announced a “No More Refugees” demo for Saturday, June 4.

Chief Superintendent Nev Kemp said: “We are aware of this event being advertised but no group has notified us of the event or engaged with us to date.

“Should we become aware that any group wants to exercise their right to protest, we will of course be happy to liaise with them and the local community to try and facilitate a peaceful protest.”

Stop MFE said they are disappointed to learn of the march, but vowed to show the marchers the same opposition as in previous years.

The organisation’s Polly Bentham said: “Once again, the people of Brighton will come out to oppose them, showing there’s no place for hatred or division in our city.”

There was no march in the city last year, but in 2014 violence which broke out between members of the March for England and anti-fascist counter-demonstrators led to several arrests and shut down large parts of the city for the afternoon.

Sussex Police said the policing costs for the day were about half a million pounds, and businesses estimated that the march could have cost them millions more.

There have been calls to ban far-right marches in Brighton and Hove, but the police says it does not have the power to do this.

Earlier this year, seven people were given suspended sentences for their part in the 2014 march violence, with another six acquitted. Those convicted included both nationalists and anti-fascists.