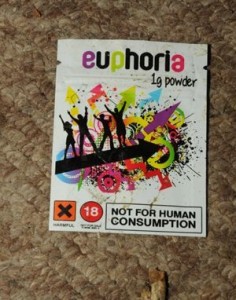 Sussex Police say it is planning to police the Psychoactive Substances Act, which puts a blanket ban on the production, supply and importation of new psychoactive substances, in a practical and proportionate manner.

Legal highs have been linked to the deaths of several people in the city, including John Sterling Smith and Hester Stewart who died after taking mephedrone, which was then legal, in 2010.

Last November, Oliver Parsons was jailed for life after stabbing Joe Lewis through the heart after taking the legal high Euphoria, as well as a cocktail of drink, cannabis and heroin, on Christmas Day 2015.

Detective Inspector Andy Bennett of Sussex Police said; “This new legislation is a very positive step forward. Police are ready to enforce the new law and tackle the harm caused in communities by the sale and use of drugs.

“As with all controlled or illegal drugs, our approach will be practical, proportionate and based on the individual circumstances.

“We are committed to reducing the harm caused by all drugs but we cannot do this alone; prevention, education and health service all have a crucial role to play.

“‘Head shop’ owners and other suppliers have been told what the act means for them, and have been given time to adapt to the new law and stop the trading of these potentially dangerous drugs.

“Police will work with local authority trading standards to educate users and potential users about the new law and the risks of taking unknown substances.”

A variety of options exist in enforcing this legislation including prohibition notices, premises notices, prohibition orders and premises orders, which allow police or local authorities to require people to stop stocking, selling or supplying psychoactive substances.

Officers have been given powers to stop and search people, vehicles and vessels, enter and search premises in accordance with a warrant, and to seize and destroy psychoactive substances.

Andy Bennett added: “Police, Trading Standards, border force and other organisations have been working hard to tackle the supply of controlled and non-controlled NPS but a blanket ban on new psychoactive substances will make it simpler to deal with those drugs that are unsafe but may not yet be controlled.

“It will also make it easier to tackle so called legal highs which may contain mixtures including already illegal drugs.

“We encourage the public to let us know, either direct buy 101@sussex.pnn.police.uk or 101, or by contacting the independent charity Crimestoppers anonymously on 0800 555 111 if they believe shops or establishments continue to supply psychoactive substances once the Act commences on 26 May.”

What is banned? Any substance intended for human consumption that is capable of producing a psychoactive effect. The legislation provides a blanket ban on the production, supply and importation of new psychoactive substances. Alcohol, tobacco and caffeine will be excluded, and there are also exemption for food and medical products.

Already illegal drugs such as cannabis, , heroin, cocaine and ecstasy will continue to be controlled by the 1971 Misuse of Drugs Act.

The new Act makes it an offence to produce, supply, offer to supply, possess with intent to supply, import or export psychoactive substances; that is, any substance intended for human consumption that is capable of producing a psychoactive effect. The maximum sentence will be seven7 years’ imprisonment.

The Act includes provision for civil sanctions – prohibition notices, premises notices, prohibition orders and premises orders (breach of the two orders will be a criminal offence) – to enable the police and local authorities to adopt a graded response to the supply of NPS in appropriate cases.

It will be illegal to sell new psychoactive substances (NPS) often referred to as “legal highs” and you could face up to 7 years in prison.

It will be an offence to produce, sell, import or export NPS.

It will be illegal to buy NPS from online headshops. This could result in importation charges and up to seven years in prison.

Giving NPS to friends could result in supply charges.

The Act does not create an offence of possession of NPS, unless there also evidence of supply or intent to supply.

The new law will be enforced by Police, Trading Standards and Border Force.

The Act also give the police the power to shut down websites trading in these potentially dangerous drugs.

The application of the law is purposeful and proportionate to individual circumstances. A variety of options exist including warnings, Penalty Notices for Disorder and referral schemes. Selling NPS could result in seven years in prison.

All known retailers in Sussex have already been visited, with assessments if their stock levels and advice on appropriate disposal of any articles included in the Act.

On Thursday 26 May police will revisit retailers and reiterate that the new act is in place, will again assess any stock levels and report potential offences for consideration as to what steps should be taken.